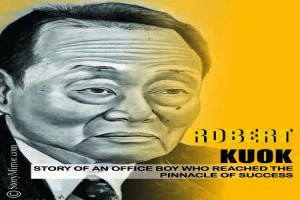 Robert Kuok: Story Of An Office Boy Who Reached The Pinnacle Of Success
★★★★★

This is an incredible story of Robert Kouk that describes his journey to financial success from an office boy to the richest man in the whole of Southeast Asia! Robert Kuok Hock Nien was born on October 6 1923, in Johor Bahru, Johor. He is the son of a well-to-do Chinese commodity trader who shifted to Malaysia in pursuit of better business prospects in the 20th century.

After completing his school education from Raffles Institution, Singapore, Robert Kouk did his graduation. Thereafter, he started merchandising for sugar, rice and wheat floor. Even before this, Kuok worked as an office boy. After working from 1942 to 1945 in Japanese industrial conglomerate, he started his own business and founded Kuok Brothers Sdn Bhd. Now he began to invest in sugar refinaries. After Malaysia became independent in 1957, Kouk began to expand his business prospects and eventually controlled 80% of sugar market of the country. He purchased sugar from India, and sold it in Malaysia with a turn-over of 1.5 million tonnes production. He was now titled as ‘the sugar king of Asia’.

There was no stopping for Robert Kuok now.  In the year 1971 he was able to set up his first Shangri-La Hotel (in Singapore) and then in 197, his second launch called the Kowloon Shangri-La hotel happened.

His company, “The Kerry Group” procured a 34.9% stake from Rupert Murdoch’s News Corporation in the South China Morning Post. In the year 1993, on the 1st of April, he officially retired from the company and began to live in Hong Kong. Eventually, the Hong Kong sovereignty also chose him as one of their representatives.

The Kuok Group has sold two of their sugar industries for a whopping $365 million
in Malaysia. According to Forbes Magazine 2011 statistics, Mr. Kouk is considered as world’s 61st richest personality with a fortune of $12.5 billion.


Today, Kuok holds the possession of multiple ventures across Malaysia and has projects spanning across countries like Fiji, Australia, Singapore, Philippines, Thailand, Indonesia, Mainland, and China, plus 10 bottling companies of Coca Cola. Not only this, Beijing World Trade Centre is also owned by him. Robert Kouk’s varied businesses include owning the fields of sugarcane plantation, sugar refineries, oil, finance, trading, mining, freight, properties, and publishing. He also holds Transmile Group to his credit which is a company responsible for transporting freight between India and China. Not to mention the least, Kouk stakes in Malaysia International Shipping Corporation as well.

The story of Robert Kouk is a true inspiring legend that undoubtedly declares that determination and perseverance with the right attitude is a sure ladder to success.

Robert Kuok: Story Of An Office Boy Who Reached The Pinnacle Of Success