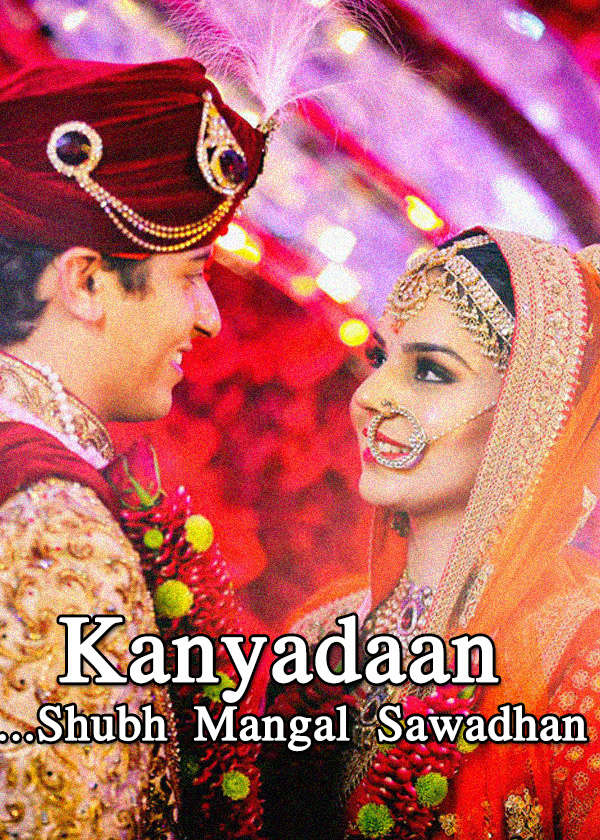 The day was same as any other for the whole world except for those two families who were discussing whether their young son and daughter would make into a good match. And surprisingly fast it was decided that they did. Tanay, the groom - to - be was shy and excited at the same time, wanting to talk to his bride- to - be, Ira.

The young girl on the other hand was in more of a confused state of mind. She was certainly happy, and contented that the love of her life would soon be with her forever...but all of a sudden she had become the bride- to- be from the young , loved, cared for daughter of the household. Suddenly, she heard someone say its only a matter of few weeks and then she would be a member of some other family. She met her in- laws as she was ideally 'supposed to meet' and then they left her home saying '' aata jato sunbai, laukarch yevu tumhala nyaila''( We will leave for now daughter in law, but we'll soon be back to take you along)...Seeing them go along with the groom-to -be she was unknowingly praying they never come back...she felt they came to leave a void in her life...she would have to leave her family and go...She looked at her father whom she always went in need of a trump card for all her demands, from crayons and colouring books, to permission for school picnics, from Barbie dolls to her groom-to -be...it was always her Dad who she asked for when life seemed difficult.

His strong shoulders she believed could carry all weight of the world, as she would swing on his arms as a 4 year old...my daddy strongest!!!...She turned around to take a look at her house, that saw friends and family running here and there preparing for her engagement and then her wedding...This was the house where she came back from school, this was the house that saw her birthday celebrations,1st, 5th, 10th, 20th, ...and now she had grown up to be married off?? She felt the years flying by in front of her eyes...this was the house where she learned many a big and small lessons of life, this was the house she laughed and cried, celebrated and showed anger...this was the house where she was brought in when she was born, her mother holding her in her arms, this was the house where her mom taught her to speak, to walk,the house where mom made her little world for a little princess, she could hear the lullaby her mom sang to her, this was the house that her mom kept awake because her little princess was not well, because she had exams or because her daughter was upset due to some petty fight with her friends...'' Aai..." she exclaimed as she ran towards her mother who was trying to look as normal and happy as she could and tightly hugged her, almost sinking into her. "I don't wanna go" she said as tears rolled down her eyes uncontrollably. The mother and daughter both cried, hugging each other as tight as they could. The house that was looking like a fast moving machine a while ago, froze at once...every eye was moistened. The mother gathering herself then said, " Beta, I love you the most, and will always do", hearing this, multiple streams of tears rolled down from each eye...as each voice choked.

Days passed and the preparations for the wedding were in full swing. Music, dance, jewellery, gifts, food, all things that symbolise celebrations, filled the entire world around for the two families. Phone calls and visitors increased as more and more minutes slipped faster than ever. Then came the day when the rings were exchanged and Ira couldn't stop losing track of time as she would sit admiring her ring. She was soon to be married to someone she dearly loved. She was soon to be part of Tanay's life, a loving married life they both dreamt of together was about to start...

And then the day arrived...

The wedding day was full of hustle bustle, as were the days preceding it ever since the day the marriage was promised. The families had been awake almost all night, and all kinds of emotions ran through them coated with, the happiness, the contentment, the excitement, the relief (wedding preparations are exhaustive after all), and deep within the nervousness, the anxiety of a married life and the pain of separation of the little loved daughter...Ira. Everything happened according to the mahurat and all was just picture perfect, and then the sounds of Mangalashtak were received with all heart- 'Swastishri Gananayakam Gajamukhum, Moreshwara Siddhithn'... mandap pujan, the saptapadi, the pheras, the Kanyadan...all done...perfectly well...the blessings showered, as the newly weds went touching each feet of the elders and collected hugs and kisses from the loved ones, as now the coating was wearing off and the feelings kept deep within became clear...it was time to say good bye...

The kanyadan was done, and Ira had to go to her new home, leaving behind everything that defined her so far, even though as a person she would not change. She was no more the girl each of the people there or anywhere in the world knew, she was a newly married young lady. She had suddenly grown up to be someone's wife, someone's daughter in law and all the things that come along. She and 'her family' which had now became her ' maaher' stood their trying to control their emotions from flowing down of their eyes as sparkling tears, as they looked at each other. She was the greatest treasure her family had, the best friend her little sister had, the partner in crime her brother had, the weak point of her father and the greatest strength of her mother...Ira was now Tanay's wife, and Tanay was the love of her life... She was happy and sad, excited and nervous...she wanted the time to freeze just for some more time...and someone said...its time to go...and so she did...as the sounds of goodbyes mixed with tears of separation flowing from each eye...they took the bravest step they would ever take... outside the threshold of her home....aah...sorry...her 'maaher'...With her she took the light and blessings and left a part of herself behind as she walked towards the decorated car, which read...Newly Wedded~ Tanay and Ira...

The wedding bells that await my 'yes' ,

Are all happy and joyous I guess

Stepping towards a new start thereto

My heart says 'yes I do'

It has been a hard task

To wear such an unfitting mask

If I had a choice I say

It would have been a big fat nay

And now as the drapes fall,

And the auspicious music that fills the hall

A newer dream arises in me

The dream I had thought, I better not see

The sacred thread I would soon wear

And have my beloved to always be there

It's indeed a new start

As my nervous heart fills the cart

My name that won't fade till eternity

As I stand to face serenity

I shall have a new address

And a new person to seek redress...

My home's threshold I see in my mind,

As childhood runs in, all innocent and kind

Oh why this pain in the name of gain,

Why these tears that bring in rain

I wish I could run back in

To hide behind my greatest kin

To see my mother smile at me

But as they say, so shall it be,

It would be the palanquin and me,

With tears in my eyes, I shall leave my kith

Wedding bells that sound so loud,

Make my dear ones all so proud

To be a part of a someone's life I go

With new dreams and ways and so...