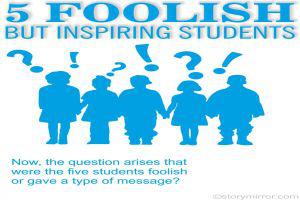 He found the whole class foolish and left the place without wasting even a single minute. Now, the question arises that were the five students foolish or gave a type of message? Let us talk about the message they gave through their foolishness.

Student 1 gave a message that one must try to be an optimist and never to lose enthusiasm at any stage of life. He should get ready to face any challenge. Fear is an alien to us. It is beyond our understanding. It can arrive at any interval of time. We have no control over it. So, just attain ample confidence with enthusiasm and move on. The rest must be left behind.

What actually had happened with the first bencher was that the fear was running through his nerves when the teacher suddenly asked the question to him. The fear got an increased acceleration after the students started to laugh at him. This made him a pessimist. He thought that whatever he would speak now, will surely cause something negative to him. He will become a laughing stock for everyone. So, he found profit in remaining silent.

Student 2 is a real life example of the current students. If we assume, there are just about 2% students who learn by heart. The rest make a fun of knowledge. Student 2 gave a message that the true knowledge should always rest with us. Consider ABCD, we never revise this because we learnt it by heart. Similarly, one must try to remember things. What the teacher asked him was a simple question because he had already learnt the concept in his previous class. he could not reply to the solution because he had not learnt the concept by heart (may be the whole class).

Student 4 was a little bit confused but a clever student. He knew the solution but in other way. He gave the message that there is no shortcut to success. The only shortcut to success is hard work. One must try to face every problem enthusiastically. He should not try to find shortcut so as to triumph the situation easily. There is no gain without pain. Student 4 tried to make the problem simple and with correct solution.