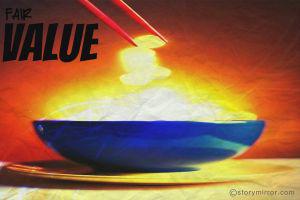 There was a baker who purchased a pound of butter from a farmer on regular basis. One day, the baker thought of checking the weight of the butter to see whether he was buying the right quantity of butter. His apprehension was not wrong. He was indeed being duped! So the baker decided to go to the court and ask for justice.

The judge asked the farmer to show the measure that he used to weigh the butter. The farmer humbly replied to the judge saying that though he had a scale, but did not have any modern tool as such. The judge then asked the farmer, “How do you weigh the butter then?” The farmer answered the judge saying, “Long before the baker started purchasing butter from me, I have been purchasing a loaf of bread that weighed a pound. Each day when the baker gives me the bread, all I do is place it on the scale, and give him the butter of equal weight. Your Honour, I am innocent because I never gave him lesser butter than the weight of the bread that he gave me.”

Well, the moral of the story is that we always receive back in our lives what we give to others.  Whether in terms of money, honesty or behaviour, life returns back to us just the way we have delivered. If we haven’t been fair to someone, then how can fair value come back to us. There are people who practise dishonesty and can lie so much with ease that the truth becomes invisible. But the question is- Who are they deceiving? Well, themselves.