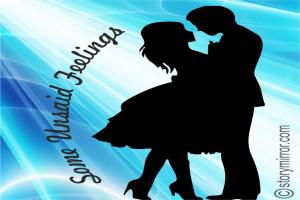 The clouds were never so provoking - the silence of the ambiance, the serenity of her closeness, that long stretched road, all so empty, as if it were designed only for us. How hard it was for me, not to rejuvenate this temptation.

She was standing right in front of me, just the two of us. Everything present was attracting me towards her. I stepped forward, a step closer to her and then she looked up, into my eyes and Oh Heaven!

Those masterpieces of vision took me to another world. I was lost in them. I didn't touch them but even today I can express the delicateness of her eyes which I felt for the first time.

That's not all. That day we shared something more special - a feeling beyond words. How can I forget the moment when I came closer to her! The only gap between us was that line of decency, my tiptoe touching the nails of her tiptoe and my hands rose to her waist, enclosing the flaps and curves of her belly. I got hold of her red t-shirt that said, 'BE PATIENT, I'LL EVENTUALLY SAY OR DO SOMETHING INTERESTING.'

Did she ever know how sarcastic it was for me? How could I be patient? She standing in front of me, my adrenaline rush was bursting out with loads of enthusiasm. What could be next with a guy with his hands around a girl's waist? Obviously I wanted to hug her and I asked for her permission. The most probable answer would have been a 'Yes' or 'No', but she didn't say either.

I still don't know what to infer from the answer, "I don't know!" when asking to hug her. I just repeated my question and she reiterated her answer, but this time my hands had already covered half of her back and my lips were close to her ears and again I asked and now there was no reply but her chin touched my shoulders and I took it as a consent. I leaned forward, leaned my head along hers, resting on her shoulders, my hand draping around her waist, covering her back and our bodies touching each others, our hearts close to each others. I was still not over of it, when her hands rose too and her palms touched my back and we had our first hug.