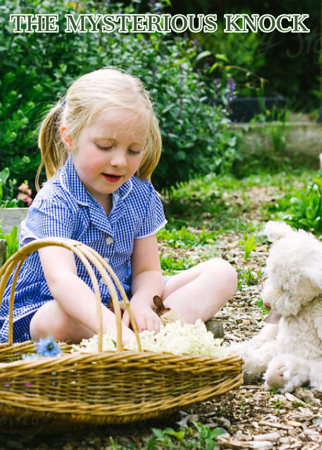 It was a chilly night. I curled up inside my blanket and started watching a horror movie. A terrifying scene was playing on the screen when I suddenly heard a slight knock on the window of my thirteenth-floor apartment. I was horrified. I froze thinking as to who could climb up so high to reach my window, and that too at night.

I heard the knock again. I contemplated whether to just switch off the television and hide inside my blanket or to go up to the window and check who was knocking. My mind kept warning me, but curiosity got the better of me and I got up from the bed. With my hands trembling and feet shivering, I gradually went near the window and opened it.

My heart was now racing rapidly and my eyes inadvertently were shut out of fear. However, I opened my eyes after mustering courage and was shocked to find a teddy at the window. It was uncanny. It was the same teddy that I had always wanted but my mother had kept procrastinating the purchase for some odd reason or the other. The teddy was a white bear with deep black eyes and soft pink ears. I kept staring at it in horror and bewilderment, and it stared right back at me. Suddenly, we both screamed...at the same time!

I noticed that the teddy bear was struggling to hold itself and wanted to climb over my window to get inside my house. Though I was scared, my heart went out to it and I decided to help the teddy. I feared it would fall so I lifted it up and brought it into my room.

"Why have you come to my house? What do you want?” I asked.

"I have forgotten what I have come for. Please, could I stay at your place for one night? And if I remember everything, I will tell you my whole story.” it replied.

Just when I was trying to absorb the bizarre situation I was in, it suddenly struck me - teddy bears cannot talk! It was silly of me to have not realized so earlier. I was petrified and started running away while it went on saying, "Wait! I am a good teddy bear. I like to keep people safe and entertained."

I stopped because there seemed to be an honesty in the teddy’s voice. Maybe, the teddy was not so bad after all. Maybe, it was a special teddy which could talk. My instincts told me that I should believe the teddy and so, I allowed it to stay with me. That night I was immensely contented. By a strange turn of fate, finally, I had my favorite teddy right beside me to cuddle and watch some horror movies together with. We also made some popcorn and cotton candy, and we dozed off after relishing these to our heart’s content. The night was fun and went by quickly.

The next morning when I woke up, I saw the teddy bear snoring so I decided to let it be in its deep slumber. It had, after all, climbed thirteen floors to reach my window. We had in fact slept quite late too. After brushing my teeth, I sat down to have my breakfast by myself because my mother was away for her work. I noticed then that the teddy had woken up; it asked me what time it was. I answered and told it to brush its fur because it was looking like a hairy monster. After freshening up, I asked the teddy what it wanted to eat. It wished to have a vegetable grilled sandwich. I had the same food on my plate so I shared my breakfast with the teddy. Then I cleaned up the dining table and switched on the television.

Suddenly, the teddy exclaimed, "I remember!"

"I remember everything now! My name is Brownie. One day, I was going to the woods for camping with my friends. While we were on our way, unexpectedly one of our friends got lost. We began looking for him but as we were unable to find him even after half an hour, we were all panic-stricken at the thought that we may never find him again. Suddenly, all my other friends were attacked by a huge bird and were carried away. Somehow, I was not attacked and to save myself, I came running out of the woods and spotted your building. I saw a teddy bear sticker on your window and that is why decided to come to your house for shelter."

"Oh, that is sad. You have been through a lot. But, how can I help you?” I asked with concern.

"You have to help me look for all my friends. Please.” pleaded Brownie.

I agreed and we set off on a journey to look for Brownie’s friends. We searched in all the nooks and corners, highs and lows, of the woods possible. While we were searching for them, we saw a gigantic bird flying above us. I asked Brownie if that was the bird that had attacked his friends.

We were delighted to have spotted the bird and assumed that the friends would definitely be somewhere around. We followed the bird deeper in the woods. The journey seemed never-ending. The bird was flying at a great speed and it was extremely difficult to keep up. But somehow we managed. When the bird stopped to drink water, we too stopped to catch our breath and quench our thirst. Eventually, the bird stopped at its nest.

When we reached right behind too, we thought about asking the bird in its language if it knew where Brownie's friends were. We went to it and just when we were about to probe with our barrage of questions, it spoke to us.

“Why are you here and what do you want from me?” the bird asked with a frown.

Brownie and the bird spoke in their language and Brownie asked the bird about its friends' whereabouts. The bird did not seem very forthcoming in answering any of his questions. Brownie begged and pleaded. But by then it was already night time so the bird pronounced that she would give him the answers the next morning. As we began looking around for a place to stay, the bird sensed our worry and suggested that we could sleep right under the tree on which its nest was.

It was nice sleeping under the open sky but it was creepy too as there was no light. It was pitch dark. We did not use the light source we had as it could disturb the bird and its family. Brownie and I somehow managed to sleep that night right under the dark blue sky with pretty little white stars and a big moon; a tad bit light, enough to let us feel a little less scared.

The next morning, we woke up with the sun's rays falling on us. We jumped up and looked straight towards the bird's nest. Brownie climbed up the tree and looked for the bird. It wasn't there! He jumped down and looked helter-skelter. But luckily, in a split of a second, we saw the bird flying back towards its nest with some food in its beak for its kids. Brownie heaved a sigh of relief. He then nudged the bird and asked for the whereabouts of his friends.

All of a sudden, like a cast had been spelled, the bird turned into a beautiful princess and the entire woods turned into a castle. The bird's kids turned into little children playing about in the fields. The princess then turned around and thanked us profusely. But Brownie and I were in a state of shock and still wondering what had happened. The princess responded, "A magician had cast a spell on me, as I was a wicked kid and troubled everybody. I would hurt animals and birds and bring them into this castle, never to return again. So he turned me into an evil bird to teach me a lesson. He also said that my spell would break when an animal and a human become friends and come to me for help. I would come back to my normal self only when I decide to help them." She also added that "Your friends are in the castle's basement, locked, including the one who got lost earlier."

Brownie and I almost cried. But the princess assured us that her transformation had made her kind-hearted and a changed person, and she would certainly help Brownie get his friends out and free. We jumped with joy. With a huge smile on our faces, we followed the princess, into the castle, and then down to the basement. We saw Brownie's friends huddled in one corner, sobbing. As soon as Brownie's and their eyes met, they screamed with joy. Tears were running down everyone's faces. I was delighted to see Brownie so happy.

The princess then unlocked Brownie's friends and they hugged each other as never before. The princess then guided us out of the castle and apologized profusely to which we asked her to just forget about the whole episode. She then mumbled a few magic words and we all were suddenly back into the woods, hale and hearty. The castle and the princess disappeared. Brownie then thanked me innumerable times for all the help. He also introduced me to all his friends and we all hugged.

I then turned around to return to my 13th-floor house, instead dropped with a thud. Groggily, I opened my eyes and realized it was all a dream. I had actually slept off while watching the horror movie, and had dreamt the wonderful journey with my favorite teddy!!!