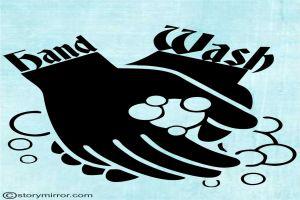 When Appu tried a pricey multi-national-produced scented hand wash, he found out to his horror that there was no liquid left in the white bottle. Now Appu is very concerned about hygiene and hand hygiene tops his daily chores. No, not an obsession, like Jaggers, in the Great Expectations, who deliberately, strongly smelled of soap but surely inclining towards  a subliminal desire, or anxiety, to appear fragrant, sanitized, and, dry-cleaned, at odd hours, in his little shop and home. Appu, as friends knew, always washed his broad hands after going to the loo, drinking tea or, after shaking hands with visitors that were very few.

"Who consumed the hand-wash?" he demanded, tone stern like a magistrate, eyes burning cat-like in the dark night.

"Granny!" said the little Tinku, the voice coming from a different, drifting world.

"Dunno!" said little Tinku, pushing his round-rimmed glasses over his pudgy nose, looking steadily at the TV, connected with those toons. The round specs were adopted in clear imitation of Harry Potter, minus the powers of the wizard kid.

Frustrated, Appu went to his wife.

"Who finished the costly hand-wash?"

"Your Ma," she said, reading a magazine, showing no interest in the obese man and his query.

"Have you not told her that it is for me and my special guests?"

Appu felt the surge of anger.

"You told Ma that it is very costly?"

"Both have only one hobby, washing hands after every five minutes," wife’s tone was clearly mocking.

"I do not wash hands after five minutes," protested Appu, stung by her vicious comment.

"Then, seven minutes," corrected the wife, still reading, "Ma does it after every five minutes."

His wife said, "Tell this to your old mother. She has no other job than washing her hands after every three minutes."

"I do not keep a watch," said she, "Ma first washes hands with soap two times, then, third time with the liquid soap. Goes on throughout the day, this silly hand cleaning."

Appu said nothing. Hands need to be sanitized. He thought.

"The only difference is that you do the same thing one time less than her," said the wife, turning the page simultaneously.

Appu wanted to scream, "You do nose-picking often. Is it not silly?" But he checked the rising irritation. Everybody avoids a bickering wife. A showdown with a wife can lead to a ban in the bedroom.

Appu came out of the stifling bedroom. His options were nil. Then, the idea clicked. Appu took the bottle of the liquid soap from the tiny washbasin and put it on the top shelf of the dressing table in the master bedroom, beyond the reach of old Ma.

He was gleeful, Ma suffering from deteriorating old-age vision will never find the precious bottle. Although never denied anything in childhood, but they were small things, not costing much anyway. Appu did not want to deny Ma anything, being a good obedient Indian son, but somewhere a line was to be drawn.

Liquid hand wash - costly and precious - was just meant for the special guests and for important folks like him. Umm, well, his son and wife as well.

Others can use cheap soap. What does it matter for an ailing aging Ma, cataract in both the brown eyes if she uses an ordinary bar and not an international brand? Of no use for her gnarled sticky hands that shiver often. Goes to no office; meets no visitors; remains in the corner of the balcony. Still wants to use a foreign brand. These old guys! Disgusting!

To ease his bad conscience, Appy sheepishly asked both his bored wife and son. The instant consensus - old Ma does not deserve the pricey liquid hand wash, in these hard recessionary times. The luxury of the cheap bar of soap is enough for the widow, who never complained in life and willingly worked for hours in a sweatshop to raise Appu and his siblings.  But that was in a different era that nobody now wanted to remember.

In fact, what is the need for washing hands after going to the western-type toilet for her? Even that bar costs us something, is it not?