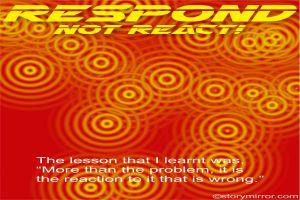 It was one of those pleasant days when the wind was soft and the sky was ready to welcome the evening with its many colours. I decided to sip a nice cup of coffee in the open air restaurant so that while I could admire the beauty of nature, my philosophical mind gets a kick.

Suddenly there was a shriek and I realised that the noise pitched up higher and louder. I saw a group of women sitting. There was panic, and a tremble in the voices. A cockroach from nowhere had suddenly made its appearance on one of the women. She was horrified and with both the hands tried to get rid of it. Somehow she managed to throw the cockroach on another lady. Her reaction was contagious. Now it was the turn of the other lady to continue the drama. The whole scenario looked messy and chaotic.

The waiter rushed to see what was happening. In the rush of throwing the cockroach away from themselves, the cockroach was now sitting on the waiter’s shirt. However, the waiter was composed and firm. He observed the insect’s behaviour. He did not move until he saw that situation was under control. Then, slowly picked it up with his hands and simply threw it away.

While I watched the whole amusing scene from a little distance where I was sipping my coffee, I wondered if the historic behaviour of the cockroach was to be blamed for the panic stricken atmosphere? But then, there immediately arose second thoughts! Wasn’t the situation handled extremely well by the waiter? Why wasn’t the waiter moved?  I understood that the cockroach was not to be blamed but the inability of those women who could not handle the disturbance caused by the insect that panicked the ladies.

When I think of myself as an individual here, I felt I react similarly situations. It is not the shouting of mom or my boss that should bother me. It is actually my own inability to tackle the situation caused by their yell that upsets me. It is not the heavy traffic on the road that bothers me but my own inability to absorb the chaos caused due to the traffic/traffic jam that agitates me.

The lesson that I learnt was that, “More than the problem, it is the reaction to it that that is wrong.”  In this incidence, the women had reacted but the waiter had responded. I promised to myself... I will always respond, not react because ‘Reactions’ are reflexive and instinctive, whereas ‘Responses’ are thoughtful and intellectual.