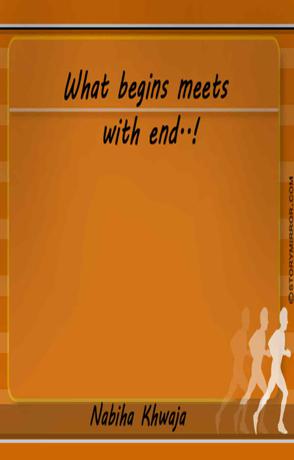 With fists closed and with a cry,

I came to life in a hospital nearby.

With hands and feet tiny and a skull underdeveloped,

I was lifted by the doctor and then landed in a crib.

Crawl I used to when little I progressed,

Further as I grew  I learned to speak as well.

Then as Shakespeare said, I became a whining schoolchild,

After graduation a successful lawyer I was.

No doubt I reached the stage when one sigh for his beloved,

The wooes and promises we made, but with shattered hearts we return.

The omen now arrived, when a family was to be made,

Years passed along  in their nurture and care.

Now as I lay on my death bed,

Stricken with parlysis, weak eye-sight and tender bones is all that is left.

I count the days which are left ,

and wait for death’s toll.

I know that this is life and it meets with death,

Alike every beginning has to face the end.

So as life faces death,

What begins meet with end,

And when we will reach eternity,

This end shall also end.

What Begins Meets With End..!