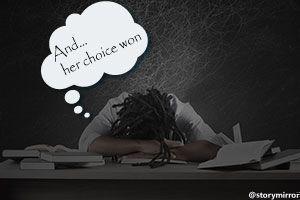 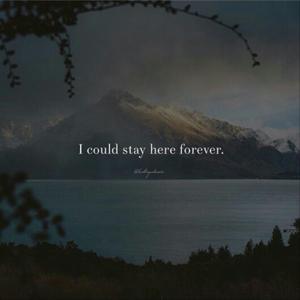 Picking up the key from under the flowerpot, she opened the door to her apartment. She switched on the lights and lied down on the recliner, thinking about how her mom used to greet her with a hot cup of coffee when she returned home from her tuition classes. Things were different now, she had always tried to be the perfect daughter for her parents, but everything changed when she decided to make a choice for herself. The day was etched in her memory and no matter how hard she tried she couldn't help but feel a little guilty and angry at the same time.

It was her final year of college, and she was buried under the pressure of her parent's expectations of getting straight A's in all the subjects. It wasn't like they asked her to but she could see it clearly in their eyes. After a lot of thinking and persuasion and talking, she had made a choice of choosing Science as her major, for her parents. She knew that she could do it, 4 years of studying and a job after that. It all seemed pretty simple to her then. So she gave up the thought of opting for literature, the subject where her heart lied and decided to make her parents happy, again. But she could not resist the temptation to read or to write whenever she got a chance. When under a lot of stress, she used to take out her favorite novel and get lost in her world or take out her diary and pour her heart out, this was what kept her going. This and the fact that she was the chief editor of her college magazine. It was like she was living two lives, the one which made her parents happy and the other that made her happy. Then one day her phone buzzed, and the call changed her life in a way she could've never imagined.

"Hello, I am calling you on the behalf of The Night Owl. We read some of the articles you had sent to us last week and our editor-in-chief was dumbstruck reading those. He asked me to call you to see if you'd be interested in an internship and also, he'd like to meet you even if you're not", the voice on the other side spoke.

She had got so much on her mind lately that she had forgotten all about the articles, they were just random stuff, and the only reason she had e-mailed them was that she was pretty sure she won't be selected no matter how much she wanted to be. Too many thoughts clouded her brain, what would she tell her parents, what if they didn't agree and the final one scared her - what if she never gets an opportunity like this.

It was when the speaker buzzed, "Hello, are you there??", Did she realize that she had to make a choice, that too now? Without thinking about the what ifs she replied, "Yes, thank you very much. I would love to work with you."

That was the night when after a heated argument with her mom, she left the house not knowing where to go and what to do next. She called up the magazine to let them know that it wasn't possible for her to join indeed. Little did she know that the universe was with her, the magazine had liked her work so much that they were not willing to let her go for a reason so silly as this, so they offered her a paid internship and also a tiny room to stay until she figured out the rest.

6 months of internship and 2 years of dedication to the magazine, now she has her own little column up and running in the magazine. She was an independent girl of 22 and had a job which paid her to do what she had always dreamt of, and she had her own apartment, tiny but hers. She knew she had made the correct choice, yet she hadn't dared to call her parents up after that night.

She was brought back to the present when she got a message. She unlocked her phone and the notification read, "One unread message from dad." She was so overwhelmed that she was a minute late in reading it, however when she did it said, "I am proud to be your dad."

A tear escaped her eyes; she had so much to say, but all she could type was, "Love you tons, dad."

And... Her Choice Won