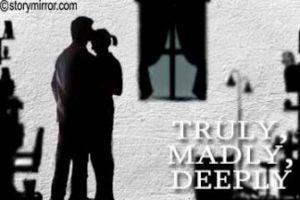 She entered the room, with a long face. It had not been one of the good days at work. She did not want to talk to anyone. No one. Just alone. She and her thoughts. Alone.

But there he was, stealthily entering and making his way towards her. How could he leave her alone, especially at a time like this when he knew that she needed him, needed to hug him, needed him by his side so that she may pour her heart out to him. He knew that no matter how angry she was, she cannot refuse him from entering, ever! And even if she did refuse, it hardly mattered to him for he would still go to her.

As he went near, she looked at him, sadness in her eyes. He knew it; he knew it right there that he was right in coming to her. He said nothing, not a single word but merely sat down next to her, looking her in the eye and waiting for her to speak. He would have definitely broken the ice had God endowed him with speech. But that was not the case. So, he patiently waited for her to start.

And after eons of silence, she commenced, venting out all that she had in mind and all that she wanted to say. He was all ears, as always. He went up to her and hugged her. His touch was magic, a soft cushiony touch. He seemed in no hurry to be released from her embrace. After all, nobody wants to let go of such a pretty girl.

Unlike others, their relationship had never been topsy-turvy. It was a smooth ride, which both of them had sailed with simple, pure, unadulterated love. His inability to speak never bothered her for she loved him too much to pay attention to that. Her love for him knew no bounds, just the way his didn’t. They had been together for almost ten years now. They practically knew everything about each other.

On his part, he too had been a loyal partner. Even when she shouted, the most that he did was not react and walk out of the room with a sad look. She, feeling guilty, would follow him and immediately makeup to him by showering him with kisses and hugs. He never left her side, except the times when she was out of home. He was like her shadow. He loved her unconditionally, and would actually give his life trying to protect her. Who would this in today’s world? Only a stupid dog would.