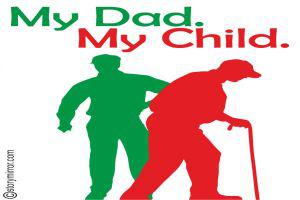 A picture of the tiger burnt bright on to him from the nursery school book, one that we borrowed from a friend whose smart 2 year old had by now mastered it all.

We asked him what it was. As he tried to recollect, certain sparks that fired in his internal circuitry traversed a billion nerve endings only to abruptly encounter a ball of dead cells and right there, they vanished into the void in a puff. He wore a lost look on his face for a couple of seconds. But then he quickly tried to hide that, out of some sense of shame. The admittance of the inability was more traumatizing than the handicap itself. Then, he mumbled from one end of his mouth, slowly and without much confidence - 'Lion. Of course, I know it is a lion'. His tongue twisted and jumped a bit as it struggled to spell it all out. And, he spoke in a voice much softer than he had ever did before the incident. His voice had fallen and receded into his depths. Perhaps out of some sort of fear. Or a sense of helpless submission to a complication that boggled him down. Only minutes ago, we had walked through the whole picture book once and identified this picture to him as a tiger. Only days ago, this was so effortless and basic a task that this would not even demand any sort of mention. The brain had always miraculously constructed the concepts in a whiff. The man, my father, used to know to drive a car, repair electrical components, reassemble machinery, compose emails and transact online, document family finances in splendidly detailed spreadsheets with convoluted formulae, sing an occasional song, tease neighbors playfully, organize weddings for friends and loved ones, bring groceries home and go to work in day or night shifts as an electrical engineer.

'The cycle of life', a friend had said. It all keeps coming back to me and keeps filling my thoughts almost all the time. Never did I think, the return to childhood could be as markedly and uncannily accurate in all its granular details.

The night that reduced my dad to a child had earlier looked as unsuspecting as any other. It is unclear when exactly the stroke hit him. He had struggled through a good part of the night on his bed, and in his confusion had only thought he dreamt that he couldn't move his arms. It was only in the morning that my mother had noticed. He had gotten up on his feet trying hard to overcome whatever was vehemently trying to put him down. He stood leaning against a wall with a coffee cup on his hand, and was spilling it all on the floor. His face and shoulders had drooped on one side and words came out of his mouth indistinctly. She instantly knew what it is. Then followed a hopelessly long chain of events until we got him admitted into a good medical facility located far from the remote town we lived in. Mother and our helpful neighbors took him out in the only ambulance available at that hour, as his pulse rate was dropping alarmingly low to the 30s. The ambulance was a mess. The driver was a kid and there was no professional there to administer any bit of reasonable aid. Couple hours later, he reached an intermediate facility with absolutely no glucose having dripped into his body, looking withered, sober and arms all stiffened. A bunch of waiting until scans could reveal the left ganglio-capsular infarct he had. We had to take him to Chennai again to get him treated. Yet another ambulance, some paperwork and another 3 hours of travel and another hospital hop due to lack of beds and finally he was admitted, at 12 midnight, pretty damn late. A week of treatment followed. More scans and tests, a hell lot of needles, blood, tablets, food pipes and few nights in the ICU. An MRI of the brain revealed an infarct the size of a large gooseberry. After the first night in the ICU, he woke up all confused and lost. For a brief while, he thought we were in September until his confusion became apparent to us from his mumbled speech. The days that followed had so many ups-and-downs. We realized, he was past the absolute danger zone. He lived. His pulse was still low in the bradycardia region, but he looked steady. What more, he was mobile. He had good action in his arms and fingers, despite the right side weakness. And he recognized us all and seemed to make sense of what we could say. This was all really good considering how bad strokes typically get. We felt glad and more relaxed. Then, when we finally got to talk to him better as he moved into a ward, we realized his difficulty in recollecting and speaking. He cried often and once he'd forget to recollect his own daughter's name. He jumbled up words and names all the time. He spent hours and days wondering why he was not able to recollect names of people and things. With a lot of difficulty he'd construct a sentence and then find himself unable to go further. We had folks visiting all the time, some crying, some that would idly sit around and recollect incidents of deaths and illnesses in people they knew and some who would suggest obscure medication from unknown places with no idea of what his medical condition even really was. After a while, the phone calls and visitors became very traumatizing to the family and at times we just put the device aside. Weeks later now, we have relocated him to the city away from his community and job, and are getting him treated here. A few months of therapies, diabetic diet and exercising to follow.

The memory is fresh in me, all from the last few days, and still seems so surreal. I remember the hospital room where I fed him with my hands as he was silently watching a TV show of his favorite people whose names he could not recollect anymore. I remember showing him how to write straight lines and alphabets in a ruled notebook. I remember getting worried as he watched an advertisement showing sweets or a funny scene on television where someone smoked or had alcohol. The term 'parental control' popped onto my mind, only it seems to have the diametrically opposite meaning. I saw him burst into tears emotionally often, unlike the daring old man he once was. As I once stepped out for a half hour's errand, he had looked for me at home longingly. With the help of a cousin, he called me up on a phone and in his low worried voice, he called out my name asking me if everything was okay at my end and asked me yearningly when I'd return home. He had been thinking of me restlessly all that time. My heart broke instantly. I remember my dad speak to me. With the voice of a child. And with the innocence of one.

And so continue the ups-and-downs of this phase. Today, we are glad as we see him recollect an ATM pin and sad when he mixes up a cover and a charger. Glad as he could write the spelling of a word or improve his signature, and worried when he tells us he feels giddy.

Dad, if you would someday be completely cured and I sure hope you do and if you would read all this then, hope you'd know and feel reassured that we will be around to take care of you.

Dad, you are my child now.

My Dad. My Child.