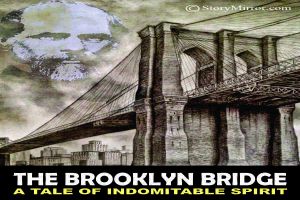 The Brooklyn Bridge – A Tale Of Indomitable Spirit

The Brooklyn Bridge – A Tale Of Indomitable Spirit

This is a tale of determination... story of a person who chased his dream to create one of the historic and the most magnificent pieces of architecture. This is about creation of the spectacular ‘Brooklyn Bridge’ by a German Engineer John Augustus Roebling who chased his dreams without getting overwhelmed by negative circumstances.

The concept of building the Brooklyn Bridge was consistently criticized and laughed upon by critics since they thought it was the most impossible and impractical attempt. John Augustus was in-fact warned that this construction would collapse and definitely result in a disaster. John felt bad and discouraged since no one trusted him. However, his passion for creating and giving his dream a life did not end. He spoke to his son Washington who was also an engineer. He discussed and persuaded him to work on his idea. Then John erected a model along with his son so as to understand how to proceed step by step. His wild challenge had now got a direction and with the members of his crew he overcame all the hurdles and built the grand bridge of the century.

1857 was the historic year when the designing of this massive bridge began. There were gigantic towers to hold the bridge’s cables which were made of steel. (These suspension bridges were however built of iron in earlier years.) This was an enormous project which was very difficult and challenging. John gave away his life to this project while Washington was injured and became handicapped for the rest of his life. Roeblings were known as “Crazy men with crazy dreams.” After the injury, it became difficult for Roebling to continue his work. Nonetheless, he discovered a way to instruct his wife and continued his work for next 13 years to accomplish his mission. On the 24th of May1883, the bridge was opened, and the whole world came to a standstill. This was one of the most brilliant erections ever made in the history and the whole of United States was feeling proud and blissful.  Dignitaries walked, military played its bands and cannons in Brooklyn Navy sounded salutes. It was called as the ‘Wonder of Science’.

Nearly 2 km long, the Brooklyn Bridge connects Manhattan and Brooklyn by spanning the East River. It is more than 125 years since the bridge is opened now but until date it remains as the busiest route for those who commute to New York.

Today this magnificent piece of architecture stands as the symbol of a man’s achievement of an impossible dream, determination and indomitable spirit. Hat’s Off!!