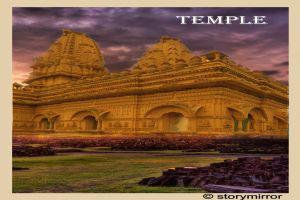 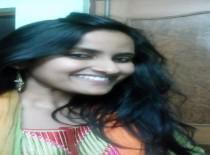 I am sitting amongst the lush sensuality of the temple courtyard—cross-legged and upright, imitating the posture of budding sainthood—surrounded by a massive concrete wall that ambitiously guards the sacred from the secular. Dusk unfurls, with restless agility and burning brilliance, like fire staggering through a maze of scorched, cracking earth. Colors—golden and ruddy, deep and frothy—diffuse across the sky. The temple tower rises in front of me; it reminds me of the Himalayas standing in its white, stately majesty; in its saintly self-absorption. My head spins, weighed down by the fragrance of musk incense, jasmine garlands, and dried-up cow dung. Squealing engines and blaring horns interrupted by snatches of human dialogue, the everyday melodies of urban life, trail off behind me. Bells, cold and ancient, ring without stopping; their echoes keep rolling in my ears, like prayers with no punctuations.

I have been here before, but only to curse—not to pray. How angry I was to read the words, "Only Hindus can enter," embossed on a metallic plate hanging at the temple entrance; to find priests tuning their blessings to the rustle of the Indian rupee; to see women being streamed out of queues that led to a prayer room open only to macho visitations; to observe a man dressed in an expensive silk kurta—his hands tucked in his sagging, jingling pocket—cut through a long line of visitors and arrogantly tag after his escort, the chief temple priest. How was I to believe in the purity of a place that breeds discrimination at its door and nestles corruption in its court?

But strangely enough, the same building that had once seemed a block of artifice now inspires in me a humbling amazement. My mother had dragged me here then. But what brings me here today? I wonder, gazing at the temple entrance, an exotic breach in the wall dangling right across my eyes like a bustling hive.

An ever-growing flock of people flood in with a thali in hand and prayers on hold: Young men and women with children huddled under their arms as emblems of conjugal glory, older couples drooping underneath the burden of age, young girls with their hair disciplined into a thick braid, lanky boys rattling around in oversized t-shirts; some are habitual worshippers and some zealous devotees. Where is my place in this crowd? I ask myself. I fit no one category but am connected to all by some universal thread of wishfulness, of sorrow, of guilt. My will is sore, but heart swamped with desires; I am here to barter my faith for the fulfillment of these desires; to ask for forgiveness or, perhaps, a premature deliverance from my imperfections; to levitate above the wreckage of my failures, or sink deep enough to not feel its weight.

The conch shell blows; its shrill resonance cuts through my contemplations and stirs up a near-stampede in the courtyard. People swarm up the sparkling marble staircase: People everywhere,bursting from every little corner of the square courtyard, darting towards the same destination. They clutch tightly on to their thalis—brass-coated plates heaped with fruits, sweets, and nuts for offerings, carefully picked and prepared to divine liking. I grab my rather clumsy-looking plate—a telling evidence of my inexperience as a devotee—and disappear into the crowd. Would the gods notice me? Would they hear the mute cadence of my prayers? These questions nudge me in the chest.

A dark, narrow passage leads into a chamber; it's where, they say, the Gods reside. I peer over the shoulders jointed in front of me: Heavy, gold-embroidered velvet curtains draw open and reveal a stunning vision of celestial perfection—statues of Hindu deities all pampered like a soon-to-be-bride; bathed in milk and honey; draped in colorful, gold-laced, satin garments, and garlands of fresh marigold. The chief pundit stands on a raised platform, close to the gods. He arranges the camphor-soaked cotton wicks on a large copper plate and lights them. Sharp, orange flames, like huge serpents of smoke, sweep across the marble statues glowing with the brave intensity of a full-grown moon. The heady scent of sizzling camphor fills the inches between bodies that are chanting mantras and singing songs in some kind of a spontaneous relief. I am melting in the thick of the crowd; the flames, the clamor, the fragrance, and an inexplicable force tug at me from all directions. The hall transforms into a spiritual vortex pulling me to its center, being nearly successful in cutting off every single limb of mine anchored to the worldly harbor outside. Here I am, tumbling down the slope of conversion.

“It is time for the Gods to sleep,” the pundit announces with scholarly conviction while he draws the velvet curtains back together. I shake up from my trance only to catch a momentary glimpse of the statues that now seem to be receding into a faraway cave. “One more glimpse, punditji, then I go,” a voice squeezes out of the crowd. A dark Indian man cries one more time—his gruff, decisive pitch not half as threatening as his stiff brows and spiky moustache—“Just one glimpse, I promise I will go.” “I come from far away,” he adds, softening his tone but never once compromising the chauvinistic tension in his features that men of his race are widely notorious for. Like a faithful servant, the pundit shakes his slippery, bulbous head in a gesture of negation. “Curtains are closed. Gods are sleeping,” he speaks one last time before signaling everybody to leave the chamber. The gentleman sighs and, after a brief moment of contemplation, mutters, scratching his bushy head, “I will wait.” His piety is ingeniously self-affirming, like a mother’s confident, knowing affection, which smiles even as her child stomps off shouting, “Leave me alone.” It affects me, upbraids me, humbles me.

Three years ago, I had refused to bow before the same statues. Crossing my arms and curling my brows I had said to myself, they are no gods but mere stuffing in stones, only dreams etched on walls of desperation. How different are things today: I have seen my grandma's shrouded corpse burn. I have abandoned a misery-stricken friend and been deeply hurt by another. Yes, sorrow and pain and guilt have driven me here to hunker down beneath the power streaming behind these velvet curtains. Perhaps, there is a greater being who may have failed in the face of human moral iniquities but still
holds down the capacity to love and caress those who faithfully ask for his attention and care, a someone who can soothe my pain...no...who has soothed my pain. Today, as I kneel down at the foot of the temple, folding my hands and closing my eyes, a spiritual torrent hits and washes my ego away. As I waft my way out in the courtyard, I feel light...uplifted...and cleansed...and calm...until...

The figure of a woman, bleak and surly as a stormy winter night, meets my eyes. She is perched at the foot of the temple staircase, with an infant hooked against her sterile breasts. “Help me in the name of god! Help the poor in the name of god,” she cries and gropes in her steel cup for a scattering of coins that I hurriedly toss into it. Metals clink; my newfound faith in God starts to tremble. I watch her crippled form crawl away, like an orphan piece of plastic flicked afloat in the gutter; she stops every few seconds to stroke her child, a horrific caricature of life. She picks freshly dumped peels of fruits from the garbage, gobbles them up, even nibbling away at the crumbs falling out of her mouth.

It is 8 o' clock in the evening. The temple glistens like a diamond against the dark evening sky .The bells continue to drone in the background; but this time they sing no life-affirming melodies to me; A red flag, fixed on the temple’s steeple, flutters in a display of triumph and holy grace, while paupers, like rags of flesh and needles of bones, are heaped along the walls of this sacred place. I am catapulted back into the worldly harbor where suffering is a well-embraced variety of human existence, and—I know—there is no escape, not even in this sanctum of enticing myth and tripping illusion where the Gods...are sleeping. Oh, the trope staring through the phrase—Gods are sleeping!