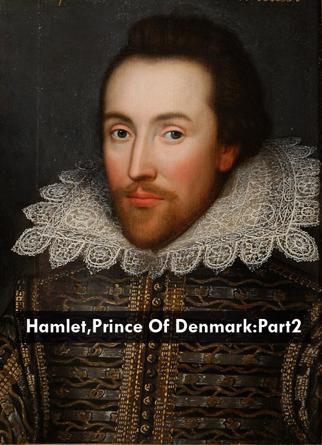 Ophelia lives at the castle. She has a brother, Laertes, who is studying in

Paris. Ophelia is in love with Hamlet. One day, while she is sewing, Hamlet

comes to her room. Later she tells her father Polonius, a foolish old lord,

'He looked so sad. He was only half dressed. He stared at me and then

he left without saying a word.'

'I must tell the King and Queen.'

Polonius trusts Claudius and Gertrude. He has no idea that Claudius is a

murderer or that Gertrude has been unfaithful to King Hamlet.

'Hamlet's love for my daughter has made him mad.'

'That is possible… but how can we know for certain?'

'We shall hide while Hamlet and Ophelia are talking. We shall listen to

their conversation and discover the truth. You will see that I am right.'

Polonius gives instructions to Ophelia. He wants her to walk up and

down the castle hall, reading her prayer book.

'Ophelia, you must help us find out the truth about Prince Hamlet's

'I shall obey you, Father.'

'Quickly, here he comes. Pretend that you are reading.'

Hamlet is thinking deeply. He wants to escape from his problem by

committing suicide. His mind is full of questions.

'To be, or not to be? That is the question. Is it better to live or die? But

what happens after we die? Nobody knows.'

'I am stupid! I must stop thinking and do something. I must discover the

'But look, here comes Ophelia. Why is she standing there? Is it a trap?'

her father Polonius and king Claudius.

'No, I never loved you! All women are stupid. They paint their faces and

talk foolishly. Nobody should get married. Go away to a nunnery.'

The King does not believe that love is the reason for Hamlet's madness.

He is very suspicious.

'We must watch him carefully. It is dangerous When a Prince is mad.'

'Poor Hamlet. Everybody admired him before. He was the perfect prince.

Now his mind is ruined. Help him, sweet heavens.'

was reading a book when he mat the foolish old lord.

Polonius: What are you reading?

Polonius: But what is the book about?

Hamlet: It's full of lies. The writer says that old men are foolish, weak and

Hamlet: Can you see that cloud, Polonius?

Hamlet: No, I think it looks like a weasel.