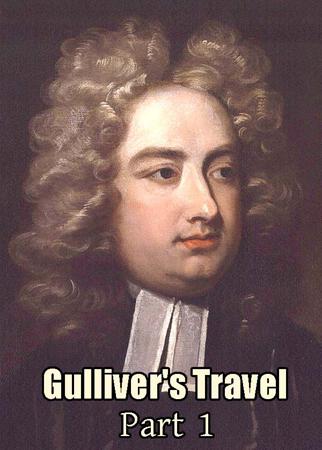 Part One: A Voyage to Lilliput

My name is Lemuel Gulliver. I was born in England. In 16, when I was a young man I studied to be a doctor. I worked in London at first, but it was not easy to make money there. I decided to work as a ship's doctor. I liked travelling, and I made several voyages. It was an interesting life.

One ship I worked on was called the Antelope. Our voyage went very well at first, but one day there was a great storm. The ship hit a rock in the sea, and began to sink. I managed to jump into one of the ship's lifeboats with some sailors, and we thought we were safe. Then there was a big wave, and the little boat turned over in the water. We all began to swim. I soon lost sight of the other sailors, and I never saw them again. I think they all drowned.

I swam for many hours in the water, and I was very tired. Suddenly I realised that the water was not deep any more - my feet touched the ground! I walked a long time, and then I came to the beach. It was evening, and I was exhausted. I fell asleep on the sand.

When I woke up it was morning. I tried to stand up, but I could not move at all. I raised my head a little, and I could see ropes around my body. They were tied very tightly. I did not know what had happened to me. Then I saw a very small creature walking along my body. I looked again, and I was very surprised to see that this creature was really a tiny man! Soon there were more of these little men walking on me. There were hundreds of them on the ground near me. They were talking to each other, but I could not understand their language.

I shouted very loudly, and the little men were afraid. They ran away quickly. Then I tried to free myself, and I managed to break the ropes around one of my hands. As soon as I did this, I felt a sharp pain. The little men were shooting arrows at me! The arrows were very small, but they were also very sharp, and I decided to lie still.

Now the little men constructed a platform near my head. One of them climbed up to the top of the platform. He was standing very close to my ear. He began to shout into my ear. I could hear what he said, but I did notunderstand the language he was using. He used signs to communicate with me. He told me that the country was called Lilliput, and that he worked for the Emperor. Then he explained that I was their prisoner. He told me not to be frightened, because they only wanted to take me to see the Emperor.

It was now the middle of the morning, and I was hungry and thirsty. I put my finger in my mouth to show the little man that I wanted to eat and drink something. He understood me, and he gave some instructions to the hundreds of little men who were on the ground. They went away, and then they came back with ladders. They had wine and food with them. They climbed up the ladders, and offered me the wine and food. Everything tasted good, but it was very small, like the men themselves.

I drank whole barrels of wine, and ate several cattle and sheep. Soon I could hear a lot of noise on the ground near me. I turned my head to look, and I saw that all the little men were now very busy. They had cut down a lot of trees, and they were building something with the trees. They worked for a long time, and then I saw what they were making. It was a large machine with many wheels. The machine was as big as me. I was now tired again, and I fell asleep once more. While I slept, the little men pulled me onto the machine. The movement woke me. I was curious to find out what they were doing. Then I heard a noise, and I saw hundreds of tiny horses. The little men attached the horses to the machine, and the horses began to pull me along. There were fifteen hundred horses pulling me! The machine began to move slowly forward.

We travelled slowly for a long time, and then we came to a city. We stopped outside the city. There was a very old temple here, and they asked me to get off the machine and enter the temple. I learned later that this temple was one of the largest buildings in the country. It was no longer used because someone had committed a terrible murder there some years before.

There was just enough space in the temple for me to enter. Once I was inside, the people tied me up again. They used ninety-one chains an thirty-six padlocks! The chains were long enough to allow me to stand and walk around. I'll never forget how surprised and frightened the people were, when they saw me stand up and walk!

Now the Emperor himself came to the temple. He brought his princess with him. They wanted to look at me. They climbed up a tower in the temple, and looked down at me where I lay. People from the city began to arrive as well, and they climbed up the walls of the temple to look down at me. Some very daring people put ladders against my body, and climbed up these. Everybody was very surprised to see me. I was the biggest man they had ever seen!