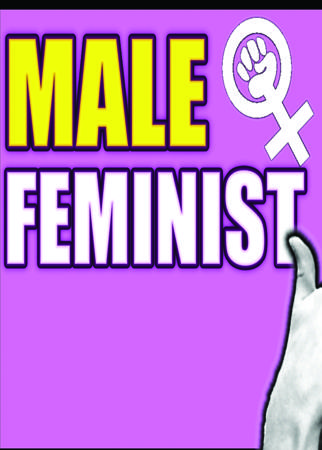 It is odd when your title contains what is perceived as an oxymoron. Male Feminism, these two words are rarely used together in a sentence; unless the sentence is “feminism is against males”. But in the prevailing conditions and in the want of a better tomorrow, I feel “Male Feminism” is the need of the hour. If we list down the hindrances that India is facing in its march towards progress, we should find Patriarchy right up there. It is often ignored or brushed under the carpet, or more eerily imposed upon us.

I have had the privilege of becoming friends, dating and then finally marrying an active feminist. She has been instrumental in shaping my thoughts, beliefs and general attitude towards gender and sexuality. I am realizing that in addition to women, even young men are the collateral damage of Patriarchy. To put this in perspective, a college guy would love to date or be associated with a “modern” girl who parties, drinks, is good looking (obviously) so that he gains the validation from his friends. But as soon as it comes down to marriage, the search is on for a homely, non-drinking, non-working girl (yet for some strange fetish should be well educated) girl so that the approval is gained from the parents as well as the ever prying relatives.

Maybe on some levels this is the reason why men feel trapped in a marriage. Instead of finding a friend for life, we tend to find a perfect addition to our families. A perfect partner was needed but we end up finding the perfect daughter in law. Make no mistake that my rant is against arranged marriage, my rant is against patriarchy and the ripple effect it has caused in our society. While patriarchy is seen as skewed in favour of men, I for one have some problems:

I have a problem being the boss of the house

I have a problem with being the better driver

I have a problem with knowing the directions to any place

I have a problem with assuming that I earn more

I have a problem with waiter always handing me the cheque

I have a problem with PATRIARCHY

My partner earns more than me and I proudly claim it. I borrow money from her with as much ease as asking her to cook a meal for me. We believe our friends and eventual partners are Batman and Bruce Wayne. One has to make way for the other; one of them needs to lose its identity for the other to rise (pun intended). We forget that they can coexist together if we can let go of our intrinsic patriarchal notions. Asking for directions or opinion of the “fairer sex” does not make you less of a man; in fact it makes you more of a human. It’s high time we change our mentalities. Swachh Bharat should be only for roads, it is to remove the cobwebs of such archaic thinking. We can have umpteen laws yet they will have the use that a comb has for a bald man if we don’t change the way we think.

To the point of being very blunt, I feel that NO, women and men are not equal right now. Women have been getting a raw deal for ages. We have definitely started talking about it, but that is just about what we have done. No tangible change is being seen in our behaviour towards women. We are witnessing brutal gang rapes, harassment at work places, molestations. In terms of exploitation we have followed our constitution word by word. No discrimination in terms of age, creed, caste. No women is spared from judgements, name calling, shaming because we have been taught that it is perfectly fine to do so and because we have seen that we can get away with it. Just the fact that we needed a law to be told that women should not be exploited at workplaces speaks volumes of the deep rooted patriarchy in the mindsets of the so called white collared society.

We are a very tech savvy generation yet our notions are still stuck at MS-DOS level. We need a software upgrade which makes us HUMANS again. Curbing the identity of a woman is like trapping a bird in a cage. You may stop her from soaring but we can’t make her forget flying. Also “allowing” her to fly is not your duty or obligation. She was born to fly and she will do just that with or without you.

Though the destination seems far and the journey arduous, but it needs to be done at the earliest. Taking small steps like asking women for help, avoiding usage of any abuses, respecting them (not in temples only), making causal jokes will help speed up the process a great deal. We know these are tough times when what is idealistic is not realistic and what is realistic is not idealistic. We need to do this not to create a better tomorrow, but instead an awesome today.