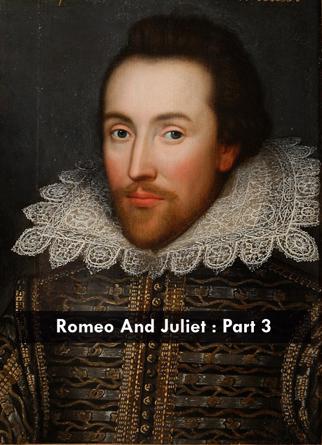 Part Three: The Prince of Cats

Romeo went to see Friar Laurence, his friend and teacher. The sun was

rising and it was a beautiful morning. The Friar was working in his garden.

He was an expert gardener who knew all the plants — the poisonous ones,

the medicinal ones, the good and the bad ones.

'To Rosaline?' asked the Friar.

'No, I have forgotten Rosaline. She is nothing to me. I love Juliet and she

loves me. You must help us.We want to get married today.'

'What? I see that young men's love is not in their hearts but in their eyes!'

'But Friar, you often told me that I was foolish to love Rosaline. Juliet is my

'Well, perhaps your marriage will make the Capulets and the Montagues

friends. It is a good thing forVerona. I will help you.'

Benvolio andMercutio were looking for Romeo in the streets of Verona.

'Poor Romeo,' said Benvolio. 'His heart is broken. Rosaline does not love

'That's not his only problem,' replied Mercutio. 'Tybalt has challenged

him. He has sent a letter to his house. He wants to fight him.'

'But Tybalt is dangerous.'

'Yes. Tybalt is the Prince of Cats. He is an artist with his sword. Romeo is

'He is already dead. Rosaline has killed him with her cold eye! To him, she

is more beautiful than Cleopatra. She is the most beautiful woman that ever

Mercutio called to Romeo. 'Where did you go last night after the party? You

ran away from us.'

Friendship is more important than love.'

It was the Nurse. Juliet had sent her to find Romeo.

'I must speak alone with you, sir,' she said.

'Is this your new girlfriend?' he asked.

'First of all, I want you to promise that you will be kind to Juliet. She is

very young. You must not hurt her.'

'Then what do you want me to tell her?'

'Tell Juliet to come to Friar Laurence's cell this afternoon. We will get

'I love Juliet, sir. I remember when she was a little child. Look after her

when you are her husband.'

The Nurse went back to Juliet who was waiting anxiously. She told her the

'Tell your parents that you are going to pray,' said the Nurse. 'Then go to

The two lovers got ready for their secret wedding. In the afternoon, the

'The day is bright,' said the Friar. 'It is a sign that the future will be happy.'

'I do not care if I die tomorrow. It is enough that Juliet is mine.'

'Don't be so passionate. It is better to love moderately. Then love will

At last Juliet arrived. She was very nervous. So was Romeo.

They were very young but very much in love. Friar Laurence was like a

father to them. He took them into his cell and they were married.

Meanwhile, Benvolio and Mercutio were walking in the streets of Verona.

'Let's go home,' said Benvolio. 'The Capulets are out in the streets. If we meet

them, we will have to fight. In this hot weather, young men do mad things.'

'Here come the Capulets. Tybalt is there!'

'The Prince of Cats. I am not afraid.'

Tybalt approached Mercutio. 'I want to speak with you.'

'Do you want to speak or to fight?'

'You are not a Montague but a friend of Romeo. That makes you my

'Be careful,' said Benvolio. 'We are in the public streets. If you fight, the

Prince will be angry.'

At that moment, Romeo came back from his secret wedding.

Romeo did not want to fight because Tybalt was Juliet's cousin. 'I am not a

villain. But I will not fight with you.'

Mercutio was angry because he thought that Romeo was a coward. He

took out his own sword.

'What do you want?' asked Tybalt.

'I want one of your nine lives, Prince of Cats! '

'I will fight you as Romeo is too afraid to fight,' agreed Tybalt.

Romeo came between Mercutio and Tybalt as they began to fight.

But Tybalt took the opportunity to kill Mercutio. The sword passed under

Romeo's arm as he stood between them. Then Tybalt ran quickly away.

Mercutio groaned. 'Aaaaagh! I am hurt. I am dying. Romeo, this quarrel

between your families has killed me.'

'Are you badly hurt?' asked Romeo.

'A scratch, a scratch. It's enough. Bring me a doctor.'

'Be brave, Mercutio. It cannot be so bad.'

'Look for me tomorrow in my grave. The Prince of Cats has killed me.

Why did you come between us?'

Mercutio fell to the ground and died. It was Romeo's fault. His friend was