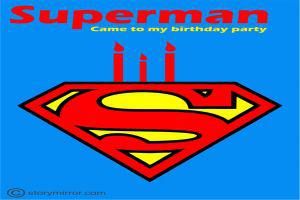 Superman Came To My Birthday Party!
★★★★★ 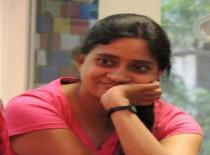 Her voice chased her son, heavy with the weight of annoyance and frustration, as he lightly ran out of the room, running smack into his father who was just making his way in.

“What happened, dear?” Rahul asked his wife, while picking up his son fondly into his arms.

Preeti was relieved to see her husband back home early, anticipating some help with the immediate trouble she had on her hands.

“Arya is refusing to get ready for Pinki’s birthday party,” she replied, visibly exasperated.

“Oh is it?” Rahul raised his eyebrows at the innocently cheeky smile that Arya was flashing, riding in his father’s arms.

“Momma is not giving me the dress to get ready!” Arya exclaimed.

Rahul smiled fondly at his wife with a questioning look in his eyes, trying to read in her eyes what his little brat was up to today.

“Arya is simply refusing to wear his dress,” vented out Preeti, pointing to a smart and cute t-shirt and trousers that she had laid out on the bed for Arya to wear to his friend’s birthday party.

“And why is that so, son?” Rahul asked Arya as he put him down back on his feet.

“I don’t want to wear this dress,” Arya said simply, with a sulk on his expressive face.

“And what’s wrong with this dress?” Preeti demanded, clearly agitated and tired.

“I don’t want to wear it!” shouted Arya, as he ran out of the room, leaving both of them alone with each other.

“Take it easy, dear” said Rahul as he reached out to his wife and gently kissed her forehead, folding her into a hug. Preeti, tired with her struggles with her son, relaxed gently into his embrace, tired and exhausted, and grateful for the comfort.

“I want to wear my superman dress,” shouted a little voice behind them, startling them for a minute, as Arya who had ran back in unnoticed, scampered back outside again.

“Aha!” Rahul exclaimed, finally figuring out the reason for Preeti’s frustration. He simply held his wife closer, trying to share with her the energy of his own relaxed state of mind.

“How can I take him to a birthday party in a superman costume! It’s not a fashion dress party!” whimpered Preeti into Rahul’s shoulder.

Rahul gently separated from Preeti, looking into her face, and whispered, “Do you remember our pact, Preeti?”

A quiet remembrance crossed across Preeti’s eyes, bringing a strange calming effect into her demeanor.

“Yes, I do!” She replied quietly. “Thanks for reminding me,” she said as a slow smile spread across her face, spelling away the frowning exasperation from before.

“Then let’s look at it differently,” Rahul said “What if we allow Arya to wear the superman costume? He isn’t asking to go naked after all! What harm can possibly come to anybody if he does wear an unusual dress to the party?”

“I would feel so uncomfortable, to take him in his superman cape and costume, while all other children come up dressed like little princes and fairies.”

“But if we force him to wear the dress of our choice, then he too is likely to feel uncomfortable too?”

“Well, looks like it for sure. He is refusing to consider any other dress at all.”

“So if we are the grown-ups here, then let’s try to overcome our own discomfort, rather than make the child uncomfortable simply because we are strong enough to control him? It’s just a dress after all! Who knows it might not feel so bad? We can even make it as some sort of a running joke, perhaps?” Rahul himself looked thoughtful and templative as he said this, the vision of a flapping cape not appealing to him either.

“What if Arya himself feels out of place once he sees the other children dressed differently, and feels let down by us?” Preeti wondered aloud, as she racked her brain for all sort of possible ways to work it out.

“We can perhaps pack in this dress as a backup plan, and we can change his dress in the privacy of the washroom if he seems to regret his choice,” Rahul flashed his eyebrows in the direction of the dress that Preeti had chosen for the child.

“What if we skip the party altogether?” Preeti was cringing at the whole idea, finding it too difficult to implement. They would be the laughing stock among the parents for sure – to amuse a few, to shock a few, and even be questioned and disapproved by many. After all it was the parents’ responsibility to make sure the child fit into the social norms and expectations!

“Arya is best friends with Pinki, and he has been looking forward to the party, and I’m sure they both will be disappointed if we don’t take him to her birthday party.”

“Okay, then let’s do it,” sighed Preeti.

“Yes, let’s do it,” Rahul smiled a brave smile. “If we feel we can’t do it after all, we always have the option of returning mid-way, and if Arya feels unhappy, we can change his dress within minutes. We should go, I think and hopefully Pinki’s parents would understand our predicament too. She is after all the same age as Arya, and must be giving them a few difficult moments as well for sure.”

This was after all their pact that they had mutually taken while they were dating. They had agreed that for any conflict situation, they would themselves consider all aspects of a given situation, to decide with compassion and fairness, if the action was required on their part, or of the other, rather than simply attempt to dominate the other. This had worked fine with them all these years in marriage, although it did take effort on the part of one or the other, to remind the other, especially in heated moments of conflict. Sometimes they both lost balance in the flow of turbulent emotions, but this was a pact that had held them together, so they inevitably recalled the pact when emotions subsided eventually. And they always reached out to each other – the first one who remembered the pact reminded the other. This too was part of their agreement.

Now this was extending to their interactions with their child too – and this certainly seemed like a new development altogether, and they were both curious to see how this would work out.

“Yippee!” Arya materialized within a minute, and stood obediently in front of his mother, happy to be changed into the costume.

“You little brat!” Rahul grabbed his son, pulling him close, with the costume in his hands. “You get dressed quickly, Preeti, I’ll take care of him now. Or else we will run late, and we don’t want to keep Pinki waiting to cut her cake!”

The next day was a weekend, and Rahul and Preeti were taking an evening stroll in the colony park as Arya played with the other children. The children were noisy and excited and chattering. They were, however, lost in their own thoughts, the chattering just a vague sound, but their ears perked up suddenly when a tiny voice piped up “Guess who came to my birthday party yesterday?”

Rahul and Preeti instinctively looked at each other, steeling themselves inside for what might follow next, glancing back to look at their child who stood in his peer circle now.

“Superman came to my birthday party!” It was Pinki who was squealing, as she held hands with Arya, happily skipping in her excitement.

“Arya knows I love Superman so much, he actually came dressed like a superman for me!” She happily gushed out again, as Arya beamed happily, and the other friends laughed on, excitedly joining the childish chattering.

Preeti and Rahul heaved a sigh of relief, and they continued on their stroll, leaving the little angels lost in their little playful world.

“It certainly wasn’t easy, but perhaps it was worth the effort?” Their thoughts were probably being mirrored in each other’s hearts, as they both reached out instinctively to hold each other’s hands, at the same time.

The contact of their hands made them turn to look at each other with a smile, a smile that glowed from the radiance of their renewed pact – a pact to truly love each other – and a pact to resist any attempt to control the other, simply because it was easier, and because they could.

“If it was so difficult for us, it would have been so much more difficult for him and so unnecessary too for him,” Preeti said thoughtfully.

“It will be easier next time for us too, I’m sure!” Rahul winked at Preeti, making her burst in a cheerful laughter, as she matched her own stride with his.

As they walked along, the sun started radiating its last few fading warm rays to envelope the whole scene – as the day started losing itself into the loving embrace of the night.

Superman Came To My Birthday Party!