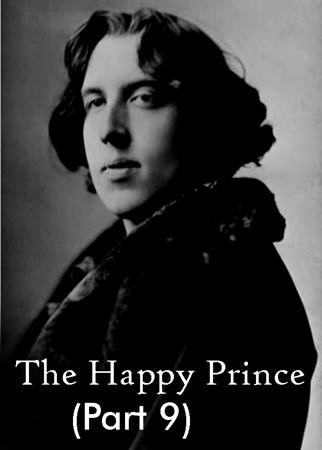 'I am glad that you are going to Egypt at last, little Swallow,' said the Prince, 'you have stayed too long here; but you must kiss me on the lips, for I love you.'

'It is not to Egypt that I am going,' said the Swallow. I am going to the House of Death. Death is the brother of Sleep, is he not?'

And he kissed the Happy Prince on the lips, and fell down dead at his feet.

At that moment a curious crack sounded inside the statue, as if something had broken. The fact is that the leaden heart had snapped right in two. It certainly was a dreadfully hard frost.

Early the next morning the Mayor was walking in the square below in company with the Town Councillors. As they passed the column he looked up at the statue: 'Dear me! how shabby the Happy Prince looks!' he said.

'How shabby indeed!' cried the Town Councillors, who always agreed with the Mayor, and they went up to look at it.

'The ruby has fallen out of his sword, his eyes are gone, and he is golden no longer,' said the Mayor; 'in fact, he is little better than a beggar!'

'Little better than a beggar,' said the Town Councillors.

'And there is actually a dead bird at his feet,' continued the Mayor. 'We must really issue a proclamation that birds are not to be allowed to die here.' And the Town Clerk made a note of the suggestion.

Then they melted the statue in a furnace, and the Mayor held a meeting of the Corporation to decide what was to be done with the metal. 'We must have another statue, of course,' he said, 'and it shall be a statue of myself.'