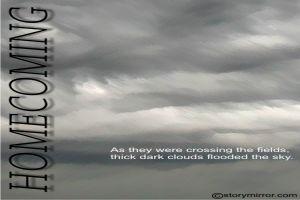 It was past 3.00 clock and Banshiram had still not had his lunch. His wife, Rajamma pleadingly called him. "No you carry on, I am not hungry..." came Banshi kaka's reply. He was called by this name in the village. It was the ancestral land that he had acquired in the village near Sholapur. He had cultivated paddy and various kinds of other crops. He was getting a decent income from his fields. But the past three years had been horrible. Drought had hit the state and it was a no-win situation. Life seemed miserable; he was worried how he would look after his family. Kaveri was born late to her parents after ten years of their marriage. The child, a four year old, was fair and beautiful. No wonder she was everyone’s favourite child in the neighbourhood. Parvati, Banshiram's sister was a frequent visitor to their house. She lived down the lane and often came to spend her time with this girl. Kaveri was very attached to this lady, more than her mother.

Later in the evening, Banshiram called to his wife and said, "There's hardly any money left with us. There is no rain again this year. I have to clear the debts too, which I have taken. This is the third year and we will be totally ruined if there is no good harvest. I think I will have to leave this village and work in a city for a year or two .Even you need to help me out."

"What! Do you know what you are speaking?" Rajamma said.

"There is no other way. I will have to find some odd job. We will have to go to Mumbai . People get many jobs there."

"No, I cannot stay in such a big place. I am too scared. What about Kaveri? The big cities are not safe for girls. Don't you know?" Did you not see in the serial ? Those city girls dressed in skirts and jeans move around with boys. I don’t want my daughter to be like that," she continued.

“Yes, it is not safe for girls. I know that. I have decided to leave her with Parvati." said Banshiram in a low tone. Rajamma was upset and in tears. She did not like the idea of parting ways from her daughter. But there seemed to be no other way. Rajamma soon began to pack up all the necessities. She was desperate and mourned at her fate. A sweet child, born so late in their life, had been the best thing to happen to them and now to part away from that little one was even more painful.

Two days later, they were to leave the city in the evening. Parvati agreed to take care of the girl in their absence. The train was at six 'o clock in the evening. Soon the tonga was packed with their luggage and they bid adieu to the village folks. After a forty- minutes' drive they were at the station of Sholapur. To their dismay the station was flooded with passengers. It was later found that the train was delayed by five hours. It was pathetic to wait for so long. So they decided to go back, have their dinner and come again later. Banshiram and Rajamma soon found themselves driving back home. As they were crossing the fields, thick dark clouds flooded the sky. After sometime it began to rain.