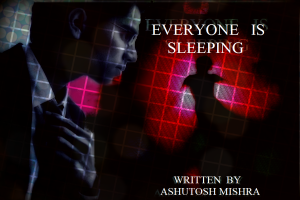 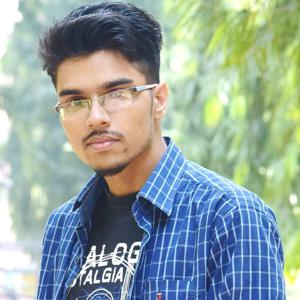 “Close the door”, said Arvind, “and make no noise. Everyone is sleeping.”

Vrinda hesitated at first but closed the door slightly and followed the man. She loved him very much.

She thought and smiled. She rarely calls him with his real name but ‘Vinny’. She thought it was a funny name but Arvind was a serious guy. He occasionally laughed and remained grim all the time.

“What have you written in the suicide note?”

“Everything that you told. I haven’t changed a word.”

She giggled and hugged him tightly closing her eyes. His arms gave the feel of her city, Varanasi. She pictured the elegant Ganga River and those big splendid Ghats. She grew up near the river and never missed the morning and evening Aartis. She was only seven when her mother passed away in a fire accident. She stopped talking to her father and her brother since that day. It was not a home anymore, it was a prison.

She met Arvind last year, during one of the evening 'Aartis'. He was so simple and shy unlike other boys but he managed to propose her and she said "Yes", the next day.

"Vrinda", he asked, "Are you sure that no one saw you coming here?"

“No one but Ganga and the holy winds of Banaras”, she giggled, "they are so fond of me."

She hugged him again and kissed him lightly on his cheek.

"I love you, Monster!" she hissed.

Of course I love him. I have left my home for him. He promised that we will go to Mumbai, the dream city. I have seen it in films. Isn’t it magnificent? Arvind and I will leave Banaras tomorrow. I will miss this city and the river and my mother.

"That Suicide letter. Where did you put it?"

Arvind asked plainly. He schemed her brilliant escape plan. He promised to be the 'Prince' who would crush the bars of her prison and miseries.

Isn’t it funny to write a suicide letter without having any plans for it, to pack your things in half an hour, and leaving your whole life behind for a new ambiguous beginning?

·         She never knew, she had that much confidence or ‘adventurousness’ as she called it.

“On the dressing table. They will find it.” She said gently.

And they will happily forget me. They never loved me. They have no reason to miss me.

She thought, staring at the walls blankly. His home was very strange.

‘Creepy’, she thought, ‘Posters of Gods and goddesses she hardly recognised. There were red curtains and some old windows. The floor was wet and the stink of rotten fruits filled the room.’

“Shhhh! don’t make noise.” He said angrily, “Everyone is sleeping. And you should sleep too.”

It was not a strange line but the way he uttered it was very different. What did he mean by everyone? He never talked about his family. May be his parents or his siblings were sleeping tight and he doesn’t want to disturb them.

She sat on the chair and drank a glass of water.

We will go to Mumbai tomorrow. The city of my dreams but Varanasi, how could she leave behind Ganga? Ganga was like a mother to her. She wanted to be like the river. Fierce, brave and free.

She wanted to walk the Ghats of Varanasi once again and feel the fresh breeze for the last time. She wanted to say a gentle ‘goodbye’ to her mother, Ganga!!

“I am not tired, Vinny. I just want to be with you.” She stood up and hugged him again. She waited for a second or two for his hands to fondle her back but Arvind was silent as a statue.

“Do you wanna play the seduction game, Vinny?” She said erotically but he said nothing except, "Not now".

“Wait here.” He released himself from her grip, “I am going out. I will be back in a minute-”, He rushed towards the door and said in a bizarre tone, “-and don’t go anywhere. Sit down and don’t make noise or-”

“-or what?” She asked suspiciously but he left the house leaving her and ‘everyone’ behind.

Why is he behaving so strangely? He is not my Vinny. What is he planning to do? May be he wants to surprise me. I should not ruin it.

She sneezed and looked at the ceiling which was very dark and some ‘Mantras’ were written there. They were in Sanskrit but she couldn’t read them. The atmosphere was too dark and stinky. She stared at the staircase and unintentionally ascended them. Still the old Mantras were hidden by the veil of darkness. She saw a series of rooms but all were locked except one. She silently walked and opened the door.

The words echoed in her mind. The room was intensely dark and she couldn’t see anything except the distant window and the big red curtain. If she could walk the distance silently and unveil those red curtains, the room can be filled with moonlight. She knew no one was in the room. Not a living soul, she thought and stepped towards the window. She tried to slide  away the curtains and opened the window with a jerk. The smoke and the moonlight instantly filled the entire room. She turned and saw what was inside the room.

She buried her screams in her heart and strangled her own throat. She rubbed her eyes twice to make sure that the things she saw were real.

Of course, she was not alone in the room but a dozen corpses lying, to accompany her.  She breathed heavily and stood there.

Vrinda realized what he meant by ‘everyone’ and the terror seized her mind.

She saw Arvind grinning from the door.

It is just a dream. It can’t be real. He is not a monster.

She desperately wanted to go back in time. So that she could close this door and forget what was in this room or she could just go home and tear that damn suicide letter. If the time allows her, she wanted to somehow avoid the first meeting with this man. She should have just stayed near the river Ganga. She wished her mother to be alive, with her, guiding her at every step of her life.

But nothing changed. She could hardly breathe in that room. She ran out of the room pushing Arvind but he caught her before she could fly.

“Why you disturbed them, you little fool,” he slapped her violently, “let them sleep.”

“Please, let me go. I swear I will not tell anybody. Please.”

He took out his sharp knife and pierced it into her left cheek. The blood crawled like a snake on the knife.

He slapped her again and pierced the knife deep into her cheek. “Why don’t you believe? The path of God is the righteous path. You will be happy and without any worries. You will attain the Moksha. I am not going to kill you. It’s just a sacrifice.”

Vrinda could feel the knife in her flesh, it was too painful. She was defeated and her trust was broken. She wanted to cry and run. It was not a house but a temple of religious fanaticism and zealotry.

Mother Ganga is waiting for me. I have to run. I have to jump in the holy Ganga.

The pain was unbearable and all she wanted was a peaceful death. She lost all her strength but the thought of decaying there with those corpses that his beloved has murdered, was awful. She managed to get a glimpse of the dead ones. They were innocent girls and most of them were young and beautiful. They were all wounded and mutilated badly, dressed in black and their skin had turned white.

And she was sleeping too. Her eyes and her senses were betraying her. She could hear the strange mantras that he was uttering softly.

She gathered all her strength and pushed herself to the stairs and jumped. She fell on the ground with bruises all over her body. She screamed and started crawling. She somehow reached the table and hid behind a tall pillar. He laughed and quickly came downstairs. She knew that she was out of his sight. She silently watched him. He was approaching her slowly. It was still dark but she could see the flash of his knife and the blood.

He suddenly stopped and his eyes searched her.

If 'Everyone is Sleeping', Arvind! How could you stay awake?

She thought and fiercely jumped at him, punched his head and kicked him hard. He spat on the floor and tried to get up but she quickly snatched the knife from his grip and stabbed him in the neck.

“Shhh! Don’t cry. Hush hush!” She said piercing it deep into his cold flesh, “Its time to sleep, baby!”

Vrinda stabbed him again and his head hit the wall. He was unconscious but not dead, she knew.

She stared at her hands and the dark blood. She wanted to close her eyes forever and stab herself to death.

But she cleared her mind and dragged him upstairs and pulled him in that room. She threw him on the floor and counted the corpses.

Eleven, she murmured, or twelve may be.

Arvind was dead or not, she didn’t know. But she was not alive anymore. The truth was just unacceptable and so harsh. She quickly left the house and ran blindly. She didn’t know where she was going, she just kept on running.

Am I Alive? Or is it just an illusion or a Dream.

It was not an illusion. Everything was real. Soon she reached the old 'Ghats of Ganga' and the cold air slapped her face and she breathed the fresh air.

Vrinda fell on her knees and wept. The moonlight was reflecting in the cold water and sun was about to rise. Night was about to end. She could hear the bells and morning Aarti. She touched the river Ganga and her eyes drank the holy water.

She asked the bold river, Ganga!

Yes, you are Alive, Vrinda!

A voice came from nowhere and she rose. She closed her eyes and heard those numerous cries. She knew what she has to do. She knew she have to be brave as her mother Ganga is.

She started to walk but this time her steps were not towards her home, as she reminded herself but towards her destiny.