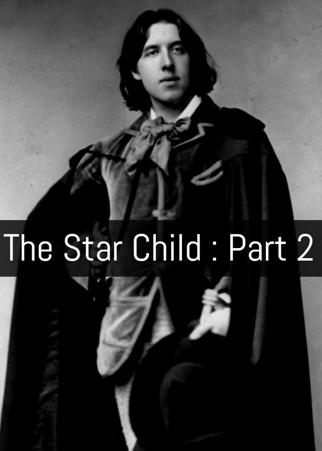 different from them. Every year the Star-Child became more beautiful: his

river. The other people in the village had black hair and black eyes and they

watched the Star-Child in wonder.

The Star-Child was very beautiful but very cruel, arrogant and selfish.

He laughed at the other children in the village and said, "Your parents are

poor but I am noble, I come from a star." He had no pity for poor people. He

laughed at ugly people and ill people. He hurt animals and he laughed when

they suffered. He was very vain and loved his beauty. In summer he often

face in the water. Then he was happy.

The woodcutter and his wife treated the boy well but they were very sad.

They often said to him, "We were good to you. We felt pity for you. Why

are you so cruel? Why do you act in this way?"

The priest was very worried and said to him, "You must respect all

God's creatures! Even the fly is your brother. Why do you cause pain to

But the Star-Child didn't listen. He continued to hurt animals and laugh at

the problems of other people. The other children followed him because he

was beautiful and could dance and make music. They followed his orders.

He was their leader and they became cruel and hard like him.

One day a poor beggar woman arrived in the village. Her clothes were

very old and torn and she had no shoes on her feet. She was very tired and

sat under a tree to rest. The Star-Child saw her and said to his friends, "Look

at that ugly woman. We don't want her here," and they started to throw

stones at the poor woman. She was terrified but she didn't stop looking at the

"What are you doing?" shouted the woodcutter when he saw this. "Stop

immediately. Why do you have no pity for this poor woman?"

"I will not listen to you. You are not my father," replied the Star-Child.

"This is true, but when I found you in the forest I had pity for you."

screamed and fainted. The woodcutter carried her into his house and his

wife put meat and drinks on the table for her. But she did not eat or drink.

She asked, "Did this child come from the forest' Did he have a gold cloak

with stars on it? Did this happen about ten years ago?"

The woodcutter was very surprised. "Yes," he replied.

"And did he have an amber chain round his neck?"

"Yes he did," said the woodcutter. "Come with me and I will show you the

cloak and the chain."

'The woman looked at these things and started to cry with joy. "He is my

little son. I am his mother," she said. "I lost him in the forest ten years ago

and I looked all over the world for him. Now I have him again." The

woodcutter was very surprised and called the boy. "Come into the house and

you will find your mother."

The Star-Child was very happy and ran in but when he saw her he said,

"Where is my mother? I can see no-one, only a horrible beggar woman."

"You are mad. I am not your son: you are dressed in old clothes, you are a

beggar woman and I am a Star-Child!"

and your chain of amber. Robbers stole you from me. Come to me, my son.

Your love is very important for me." She opened her arms to him but he was

very angry and closed the doors of his heart to her.

The woman cried. "Kiss me before I go because I travelled all over the

world and I suffered much to find you."

"Never. You are very ugly. I prefer to kiss a toad or a snake."

The woman stood up and went out of the house. She was crying very

much. The Star-Child was very happy when she went. He then went to play