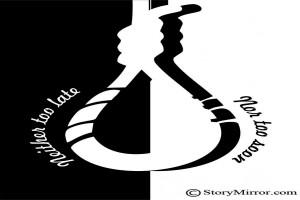 He was tired - of life, of relationships and of love. He could no longer take it, his girlfriend had broken up with him and he had no job on his name. To make matters worse, that was what his girlfriend gave him as the reason for the breakup; that he couldn't find a decent job in the last 3 years after graduating from college. It made him realize the gravity of his situation, the burden it was to others. He had graduated from a reputed college, but he couldn't reap its benefits. He felt humiliated and embarrassed on his graduation day, when his friends’ parents asked him his plans after college. He didn't have any. Every day after his graduation, he had been trying for a job, applying to hundreds of companies, but none seemed to want him. Initially his parents asked him about his prospects but they no longer did after a few failed attempts. He felt like a burden to them, but he had nowhere else to go. After a year of struggle, his father had passed away with a heart attack, which he felt responsible for. A few months later, his mother also passed away in an accident. He had no one to look after him, nor give him any moral support. The only pillar that stood beside him was his girlfriend, his ex girlfriend now, though now that he thought about it, how they did remain together for even these many days was a mystery to him. For survival, he worked at petrol bunks and small end shops. He never understood why he couldn't get a better job with a degree in commerce from such a well-known college. He kept on applying to various companies, big and small, but in vain. He was rewarded with only silence to his numerous attempts or letters rejecting him after the interview. After a while, he lost all hopes of finding a job. And may be, that was another reason for them to reject him. He even tried a psychic. The psychic had given him some lucky talismans and magic lines to chant but to no avail. He was still waiting for them to work. His girlfriend had encouraged him many a times, even looked for potential companies he could try for. She had held his hand and walked along him by his side in his worst times. He loved her for that. The problem was that, her parents were searching for a groom for her, and even he knew it, he wasn't presentable as a potential son-in-law. He wished her all the happiness in life, since it wasn't her fault that she had left him, she had to - there was no future for them. But now he was tired of running after companies, answering to people and their judgments. He was tired of it all. So, today, he had decided it was time to end his life. His life had no meaning, no one to be with, and no one for whom he could live for. For the past six months, since she had left him, he had been thinking about it. But the moment he heard about her wedding with a well-settled guy in America, it was like a string that finally broke inside him. Still, before taking the final step, he did apply for many companies mustering all the energy he had left in him. It was just for his satisfaction that he did that, nothing was going to happen overnight that had failed to happen in the past 3 years. He had finally reached the bottom most point of his life. He had visualized it, conceptualized it and planned everything about the way he was going to die. He didn't want to go through any pain while he died; he had had enough of it while he was alive. He searched for the easiest ways to die, but he wasn't sure if standing in front of a running vehicle on the road was going to help. He had decided to hang himself from the ceiling fan. He was ready with all that he needed - a stool, a dupatta, and the fan in the bedroom was working. He moved the stool exactly below the fan and tied the dupatta and looked at himself one last time in the mirror. He took a deep breath and climbed onto the stool. He tied the dupatta around his neck.

She was feeling restless. She didn't know why, but she was feeling uncomfortable, like something ominous was going to happen or had happened. Her wedding was in a week, with a postgraduate in engineering. She had accepted the guy to get her parents off her back. She had hoped that hearing the news he would come to get her with a good job in hand. She had heard from her mutual friends that he was trying more than ever to get a job. But now, it didn't seem quite right. She wanted to see him one last time before she got married, to explain why she was doing it, and apologize for what she had done. She decided to sneak out of her room in the night just to see him. She thought about how to do it, how to reach his place and talk to him. She closed her eyes trying to push her troubling thoughts away and just go to sleep. She would think about it tomorrow and decide on a way. The whole morning the next day, she looked at various possibilities, various ways that she could disappear for a few hours so that no one would notice. It was difficult, since every minute some relative or the other seemed to look for her and congratulate her. She had to go through the ordeal of fake smiles and formal hugs. As the evening approached, she was more nervous than ever. After her dinner, she told her mother that she was tired, she needed rest and that nobody was to disturb her till morning. Her mother agreed and asked her to lock her bedroom door and sleep peacefully with a small kiss on her forehead. That brought a tinge of guilt, but she had to do what she had to do. As soon as her mother left, she draped a shawl around her face, opened her window, looked around for traces of any one, and jumped out of the window. Thank god her room was on the ground floor, or she wondered what she would have done. She walked for a while and then took an auto-rickshaw to his place. It felt like forever to reach his house. She kept looking back afraid that one of her brothers had spotted her leaving the house. She took a deep breath and let it out. She walked a little nearer to the porch but stopped. She took another deep breath. She didn't know if she had it in her to go ahead. She wondered what he was doing inside, it was eerily silent. She sat on the porch steps, wondering what she would say to him. Up till now, she was so worried about reaching here that she didn't quite think about what she was going to say. She just knew she had to talk to him one last time. She thought she saw something ruffle with the wind. She turned to look at it properly; it looked like an envelope from another company. That brought back so many memories, the numerous letters they had opened only to find another rejection. She opened it nevertheless. This time it was different, she jumped up in delight. It was a job acceptance offer asking him to join in a week. She couldn't contain the happiness in her any more, there were tears rolling down her cheeks. Maybe, she could convince her parents now. She had to tell him the good news. She could imagine the surprise in his eyes, the glee in his laugh when he would see the letter. She missed the old him. Maybe, he would just forgive her for leaving him instead of supporting him. She had made a mistake, but she didn't have any other choice. But now she felt like they had a chance. She knocked on the door with impatience. It was open. She went inside to see that the light in the bed room was on. The perfect place to celebrate their reunion. She ran inside with the letter in her hand ready to flash it in his face. She opened the door with such gusto… Her breath caught in her throat. She couldn't move; she just stared at the listless body hanging in front of her. She couldn't believe it. She and the letter were too late or he just took a drastic step too soon. If only he had waited one more day, perhaps, he would have had the life he has always wanted.

Neither Too Late Nor Too Soon