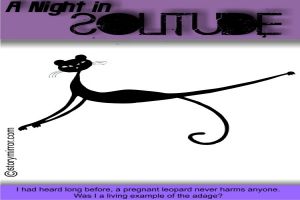 A Night In Solitude

A Night In Solitude

‘Dooars’, located in north-eastern India, are foothills of the mighty Himalayas. ‘Dooar’ in many of the native languages means ‘gateway’; named so as the region forms a gateway to Bhutan from India.

It was 3pm when I crossed the Dooars forest check post. I decided to trek up through the lonely woods. Who had imagined, this casual exploration would end up in such an atrocious stance!

I stressed myself to make way through the hill forest, without realizing the looming danger ahead.

Looking straight up from its base, the hilltop was clearly visible. I could even perceive a few blurry heads at the top as their dim voices echoed through the silent woods- giving me a perfect feel of exploration. Dressed in a collared-tee, cargo-pants, sports shoes and a leather-hat, equipped with a sleek handicam to capture diverse forest dimensions, added an impeccable touch, more psychologically than in veracity.

Tired of climbing for a few incessant hours uphill on foot, I thought of giving some rest to my limbs. While reclining on one of the soggy rocks, I just gave a relaxed glance at my watch and shouted at myself, “My goodness! It’s already seven! And I’m still not sure how much to trek more.” The sun had set in the west. As I intended to speedup, the narrow lane I was following from the base-hill grew thinner and gradually disappeared in the woods. The darkening greens all around seemed like a murky serpent swaying to swallow me up. There was no life around, except the lashing greens. Those blurry heads and their dim voices at the hilltop too faded in the growing obscurity. Soon I realized the lethal fact- I was lost! Somehow managed to find the manager’s card of the hotel I checked in, this morning. Worse was waiting - there was no network! My legs were aching more than the strenuous labor pain. I drank the last draught of water from my bottle, took a deep breath and tried contemplating the few options left with me – one to trek down the same path, which was quite improbable to find in the dark; second to find a reasonably safe shelter to spend the night and make a move next morning. Or the third may be…

Suddenly, from amidst the silence of the forest, I heard a sound from behind. I looked back with a forlorn hope; there was a peculiar movement behind the bushes. I waited curiously for a moment, raised my brows to figure out what was happening. As I intended to step forward, to my deadly bolt from the blue, I found some black-and-yellow spots and a pair of gleaming eyes behind the hedges. “A leo..pa..rd!!” my brain screamed. Its eyes were fixed on my camera. I remember their lustrous reflection on the lens. Till I firmly realized its presence, it jumped out of the bush. The yellow slim-figure was too close to put my senses up. One last thought hit me before I lost myself to the spotted carnivore – “I don’t need to chalk out the third option anymore. It was Nat-Geo’s best wildlife show-time now!”

I could feel a blatant pain throughout my body as I tried moving my feet. There was a soggy smell around. Perhaps, it was the mushy odour which had pierced my nostrils to thrust my senses back. I had no clue of what happened with me past night. It took me several minutes, even to recollect my last apprehended sagacity. The moment I twigged, my consciousness shivered again, “How am I alive? Where’s the leopard? I was still breathing heavily (I even pinched myself to check that I wasn’t dreaming). By then I could realize, the sodden place where I was laying wasn’t where I had dropped my consciousness. That was somewhere in the woods… But this was a dark shade, damp with chilling water seeping through the rocks. “Where am I?” I wondered silently. There was darkness everywhere around me, except a thin ray of light at the right corner. Somehow I tried to drag my tired body towards it. Unpredictably it was the morning sun’s fresh glare. As I peeped out, the yellow beauty had already given birth to a beautiful baby. Its cuddling touch, was wooing the new born cub. Oh a scene to cherish ever!

It was like a bizarre nightmare! Spending a breathless night with a leopard at her den amidst the abysmal forest of Dooars – hardly any explorer could make it happen! Slowly I could comprehend…it was perhaps after I lost my senses to her last night, she dragged me to her den, protecting me from the probable nocturnal attacks with her gracious presence.

I had heard long before, a pregnant leopard never harms anyone. Was I a living example of the adage? Haven’t found a definite answer till today!