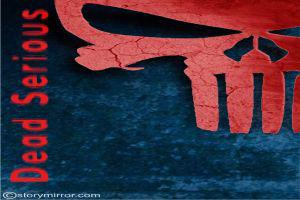 Death, the very absolute hooded figure was sharpening its silver pickaxe after having wiped off the hot red blood of its last tasty victim from it.

Sara held Christy’s hand in hers, rubbed his temples parting his wild blond hair and moving it over his eyes. The pale depressing shade of hospital white was blessed with a ray or two of orange hue of gold streaks of the dusk that had the twilight at its finish line with the cold dark night waiting at its tail.

“Wake up son, for once, please. It is your mom Chris, please open your eyes and look at me.” She sniffed back her urge to scream her frustrated soul into oblivion.

“Oh, it is entirely my mistake. I shouldn’t have, I really really shouldn’t have taken the chance with you. Oh, baby, I didn’t see the car, it was raining, Chris please please don’t punish me like this. Chris….!” Sara wailed in silence as her chest ached like her fractured arm, but a million times worse as guilt and regret built skyscrapers in her conscience.

“I don’t care what others say, okay? Do you hear that Chris? You are my son and no one can deny it. I have the adoption papers to prove that, now come on baby mom said she is sorry, wake up, for me please she won’t drink and drive again, Oh god what have I done?...”

The night had claimed its baton from dusk and blew a chilly breeze onto Sara’s face as she wiped away her cold tears in a state of hopeless helplessness. She knew what the doctor said, she knew that medical miracles did not actually exist and still she was searching rather desperately for something, a stand to take or a hope to grab on to, she couldn’t let Chris walk out of her life like this, not when her husband was remarrying, not when she had another miscarriage, no no she drank only a little that night it was harmless, "No, no Chris, please don’t, no."

Despite all the logical reasoning she taught her students, Sara sat with her head bowed to the universe in a silent shaky prayer holding Chris’s hands tightly in that small hospital unit with an open window blowing cold breezes into the despaired and desperate air that was suffocating Sara’s conscience.

“You are why he is here, I hope you know that. More importantly, you are why I am here, Sara.”

The chill in that deadly cold whisper warned Sara of an ominous presence in that small hospital unit that day. Reluctantly as surprise became a fear that echoed her heart into her ears, she stared directly at it.

A tall, dark hooded presence had joined them in that room to give them company in their despair, leisurely draping its stiff figure onto the sofa at the corner of the room, it patiently met Sara’s terrified stare. Silence; cold, chilling, blood-curdling absolution of a silence that overpowered Sara’s high-pitched screams being voiced out from the depths of her trembling soul that shivered a hundred shivers in its alarmed fear.

Sara opened her mouth to voice her blunt fear, but all that came out was realization striking her hard bringing tears to her eyes as the truth sat in front of her, in that hospital unit, dressed in the color that screamed its evil stubbornness; death looked right into her screaming, terrified soul that was struggling to leave her body and leave distance as its argument.

“I came for Christy, not you Sara. Not today, but I will be more than pleased to give you a visit sometime in the future,” the figure whispered flashing a flirty snide smirk that curled up everything that was moving and beating inside Sara. Her soul was trembling, but she got up to fight.

“So, you want my Christy? The only thing that is letting me breath and hope that it is all going to be fine one day, just fine. You want my son? How dare you!” Sara threatened the terrifying figure, standing up from her bedside chair and getting ready for the battle of a lifetime. She was not ready to give up, not yet.

“Don’t even try and play the sympathy card with me Sara, it never works. You see I am bereft of soul, heart and everything that could make me weak like a human. You see I am more powerful without these weaknesses tugging at me, holding me back from my true strength. Sara, I am here for Christy and no matter what you say or do, I am going to take him with me when the time says so and there is nothing you can do about it. Besides, you have done whatever you could to help me already. Good job running into that truck like that, by the way. I was impressed.”

Death whispered back never dropping its stare from her eyes that yearned to not have seen this horrific creature, not after all life had put her through.

Not daring to take a step away from her son, she stood close to him. Her eyes soft and sad as they ran through Christy’s face, plaster and bandage holding together his broken bones and tubes were running from everywhere to everywhere supplying him with the necessities that kept him barely alive, breathing yet not with his lungs, pulse getting weaker and heart giving up on its beats ; Christy was dying. Soon.

“No, no Christy. Don’t do this to mom, don’t give up Christy, not now, not ever, not on me. Christy no…no, I won’t let you take him. He is my only hope. No, he is my…no…” Sara started breathing heavily fighting her sobs to find her courage. She had to fight for him if not for her; she threw herself between her son and the monster.

“If you plan on taking him with you today, you will have to go through me first. I am not giving up without a fight, nor is he. I am sick and tired of this nonsense, you are a monster, bereft of anything that makes you human, makes you strong like a human. You are wrong, emotions don’t make you weak instead they keep you going until one day, you show up. You…”

“That’s enough Sara. You can stop your little overconfident speech now,” hissed the hooded figure, “Tell your goodbyes to sweet Christopher, he is leaving in a minute.”

“Go ahead. I will wait, but make it fast.” Death announced its plans as it reached Christy’s bedside and with the experience of doing what it had done for eons, Death started pulling out an invisible but surely existing force out of Christy that made the Sara throw herself on top of her son and beg, “No. no…please no.”

“I am not letting you take him, not today, not from me.”

“I don’t need your consent,” sneered the dark figure disturbed from its job. It warned for the last time, “Sara you played your part well, I appreciate your concern, but I have no choice, it is time for Christy to come with me. I don’t want to hurt you, and as far as your fight is concerned, like I said you are too weak.”

It continued with its job, limb by limb tearing apart Christy’s soul from his body, it was taking Christy apart right in front of his mother, cold and bluntly.

Helplessness betrayed her of any strength. Sara tried waking up her son, “Christy wake up! Son please, I beg you to open your eyes and look at me. Look at me, Christy. I love you, Christy. Please wake up. Don’t you dare die on me. Do. Not. Die. On. Me. Christy!” she frantically shook her son in alarm, tears crying in desperation and she wailed in despair. Helpless in her agony, she held Christy tight to her chest, not wanting to let go ever.

Sara was losing her conscious, she couldn’t keep fighting. The monitor went blank and started beeping with a straight line across it.

“Mom, I love you and please don’t feel bad, but I think you had to drink too much. Can I drive?”

Sara found herself in the driving seat of her car.

"But, I was in the hospital, the accident, death…I mean, Christy? He is alive!"

“Mom, are you even trying to listen, I asked if I can drive?” Christy placed his hand on his mom’s shoulders and shook her gently.

“I…yeah…I…err…yeah…go ahead,” Sara got out of her seat to let Christy drive and looked around for any sense of clarity to hit her; confused.

She wondered in awe, was I dreaming? Hallucinating? Having an out of body experience? What was all that about? It seems like they haven’t left the party yet and her hand seems fine, not fractured. The car was not crunched into a ball by any truck. She was still pretty drunk though. Moreover, Christy was fine; alive and fine.

‘That was a scary dream," she thought as she climbed onto the car.

“Why aren’t you driving? Too scared to fight me again, Sara? Try not to kill your son this time”, whispered the cold air that had an eerie distant chill in its tone.

Sara’s eyes widened in shock as a strangely familiar dark figure walked away into the night and to its dark hideout, sheltering this cold predator; the absolute truth that no one can escape.

Is it your turn, yet?