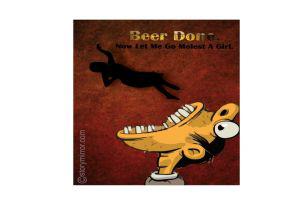 Yesterday, 8th March was Women’s Day and there were congratulatory messages floating on Whatsapp, Facebook and what not. Congratulations on being a woman; Today is your day; Wishing you a day as beautiful as you; etc. Well one man decided to ‘show’ me how much he respected the day and those that it celebrated. The scene is set in the morning hours and given the incessant showers the capital has been experiencing in the last week, the day was rather pleasant. No rain. None of that stupid drizzle. Mild sun and cool, lovely Womens Day breeze. I took a rickshaw on the way back home from the sports complex and bhaiya dropped me on the road opposite to my society main gates. If it weren’t for the peace blanket that the empty, noiseless morning roads had wrapped me in, I would have asked the rickshawallah to take the long, painful U-turn and drop me on the other side of the road, right in front of my society gates. He was almost dreading the possibility of me making the demand. But I got off and paid him the fare which he received with both hands, and put the Rupees twenty note to his forehead, in a gesture of celebrating the first earning of the day, their rightful ‘boni’.

I crossed the first half of the road almost without watching out for traffic as there was none. I then stood on the divider and started crossing the next half, when I saw a car at a significant distance, being driven parallel and close to the divider. I easily passed the car’s line and was crossing the remainder of the road, knowing that the car would pass well behind me. I had almost reached the other end when I looked to my left and saw the car cutting from the right edge of the road to the left, speeding towards me. I let out a small squeal and took two big steps to save myself from this lunatic of a driver. The car had reached me and had it not been for gigantic leap and jump that I took to place myself safely on the kerb, the idiot would get what he was gaming for, me topsy turvied on his vehicle’s bonnet. After the great leap of survival, I turned around sharply, my movements made crisp by the situation. Standing at a distance, I saw him making a sharp jig of the wheel to prevent himself from ramming into the kerb.  His car came to a quick yet dramatic, screeching hault and he waved at me, smiled and shouted, “Bach gayi !”

There was no kindness in his smile or in his words. Sure that I had never seen the person before, I stood there baffled at the absurdity of the scene. Well, not every day does one encounter crazy drivers trying to kill you and regretting their failure. And for what? Sick thoughts and Oh there’s a girl. Why is she out on a Sunday morning? Why is she wearing tight clothes (jogging tracks)? Why is she disrespecting our culture? Didn’t her parents teach her anything? Why is she alone? Where is she coming from? What’s that, attitude? Why is she walking with that attitude? Does she not know her limits? Does she not know that “Women have no place in Indian culture?”

Or better still, maybe he was out for some boy fun. Oh just had a beer, let me go and molest some random girl now. Anyhow, what scared me was the dark yet brilliantly shining twinkle in his eye. His comfortable smile. What scared me was that he was fully capable of doing what he wanted. That he thought he could do it. That he thought I could be harmed. What froze me was that Ram Singh felt the need to pull out her intestines. What froze me was that she had bite marks all over her body. What changed me forever was that the bus seats were drenched with her blood. What killed me was that she was found lying naked by the road side. What has changed me forever is that Mukesh says, “Had she not tried to stop, we would have only raped and let her go.” What gives me strength is that she tried to stop. What gives me muscle is that this is an angry world, where lynching is not 18th century history. What makes me stare back at them is that I have the power to give them “Death by hanging”. So, Mr AP Singh, I tell you that your daughter has a boyfriend. She went to the movies last Sunday. Talking of your claim of putting her on fire in front of all relatives, I’ll say, if you even so much as think of such happenings, you’ve no idea what the people will do to you. It’s a different world now Sir. Thank God, a different world.