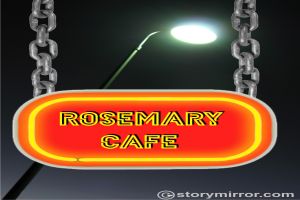 “Are you fine Sir?” Aakash asked Ronith. Aakash was the waiter at Rosemary Café, the same café which was completely destroyed when Nepal was first hit by the devastating 7.8 magnitude earthquake. Fourteen people were found dead inside Rosemary café including the former manager. Aakash was newly recruited after the café was reinstated.

“Yes, I am absolutely fine. Thank you,” Ronith winced without any eye contact, clutching a napkin with his hand. Things were in disarray with Ronith; any one could guess seeing his body language. It was only the third time that he had visited Rosemary Café after Aaakash had been assigned his new job. As always he had ordered two cups of black tea without sugar but had not even had a sip of it.

“I wonder why you order black tea. Do you even like it?” Aakash asked. “If you don’t mind not risking my job.” He said trying to start a conversation with Ronith.  He thought he could help him.

“No,” Ronith replied. The short and creepy response surprised Aakash. He noticed something strange about Ronith. He was sweating even though it was cold inside the café. He had clenched his fists and was still clutching the paper napkin.

“I want to try it for her. Black tea without sugar is her favourite. She says it is good for health,” Ronith continued before Aakash could inquire anything.

“Oh C’mon. You mean you want to try it just because she likes it? But what is the problem in trying. Trust me! It’s not poison, you won’t die.” Aakash chuckled. Ronith chuckled too. “It seems interesting. But why do you always order in two cups?”

“One is for her,” Ronith replied.

“What?” Aakash could not stop laughing. “But she never comes to visit you.”

“She can’t visit me anymore,” Ronith turned his face down.

“But why? Have you not invited her? Or doesn’t she love you?”

“She loves me. And I love her more than anything in this world. We had fixed our first date in this café on April 25th. I was late that day. She was waiting for me. Right here, on this same table where I am sitting right now. And then a terrible tremor took away everything from my life. Yes, she was one of those fourteen who were found dead under the rubble of Rosemary café. I could not hold her hand in her last moments,” he said with tinged sadness in his voice and broke down.

It was a shock to Aakash that made him strangely empty. He could not utter even a single word. Actually he could not find any words to speak.

“Sorry to hear about her, Sir. God was so unfair to you and her,” Aakash managed to say after a grief-stricken silence.

“The roof had fallen on her. She had tried to escape but as she was trapped under the heavy rubble and could not move an inch. She saw two people dying in front of her eyes. She screamed for help. But her voice could not reach outside. She was injured badly,” Ronith said.  His voice grew graver with every word. “No one came to her rescue. After two horribly painful nights she lost hope. All she could do was write a message for me on this paper napkin with her blood as ink before she left this world,” Ronith said showing a blood stained napkin of his hand.

Aakash was in a state of complete shock after listening to that heart breaking story of what had happened with Anusha and Ronith. It was terrible. He could visualize every moment of it. Ronith must have gone through a dreadful trauma after what had happened and that was the reason he visited Rosemary café.

Ronith did not reply. He left the café.

He had forgotten the napkin on the table which he was holding very dearly. Aakash picked up the napkin. And what he read on the napkin gave him a big jolt.

“I LOVE YOU ANUSHA.”

Aakash could not believe himself. He went to the counter and collected the newspaper where news on people killed by the massive earthquake at Rosemary café was printed.

‘RONITH’S BODY FOUND IN A RUBBLE AFTER THREE DAYS.’