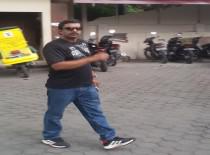 The morning mists slowly lifted off the still rocks around me revealing a fantastic landscape strewn with what appeared to be large rectangular blocks of stone or dark hardened clay. They stretched for miles, glinting dully in the hazy light. Not a blade of vegetation grew amidst the blocks but the entire scene was charged with pulsating life; I half expected the blocks to rise and start moving as the massive orange sun rose above the horizon.

As my eyes adjusted to the changing light, I saw a growing spot emerging from the sun. It drew nearer and I saw it was a young woman, curly hair flaming above her and her lithe body swinging in tune with some inner rhythm as she gracefully stepped over the blocks. She walked with purpose and when she drew closer I saw she was moving towards a block I had not noticed before. It was bigger than the other blocks around it and seemed to have been set at right angles to the rising sun. Its surface was crisscrossed with innumerable fissures, like an ancient piece of driftwood, and I felt that the block lay there through eternity, awaiting this particular moment.

The young woman stepped onto the block like she was stepping on hallowed ground. Her coppery face shone with light and a smile appeared and vanished as quickly as it had come. She stretched out her hands toward the sun and something glowed a luminescent green between her fingers. Its light danced across the surface of the block and the girl watched the surface with an intensity that seemed to exclude all thought. She took a few hesitant steps, the beginnings of a dance, then she stood still and uncovered the object nestling in her hands. It was a fruit, larger than an apple, shining as if lit from within. Her fingers gently squeezed the fruit and a few drops of milky fluid fell on the block. They sizzled on the surface for a moment and I clearly heard soft musical notes that seemed to come from all around me. She dribbled a few more drops over the surface and began to sway as pure melody filled the air. The music had no focus or theme, unformed like the early forays of a future genius and my body reacted to it with a pleasure that left me breathless.

Suddenly an old woman joined her on the block. I had not seen her come, immersed as I was in the beauty of the scene before me. The woman looked older than the block she stood on, strangely it seemed to me that they knew each other through time, through forgotten histories. She took the fruit from the girl and sprayed its surface with wild abandon. The juices sizzled on the block and waves over waves of music filled the air, rising to a crescendo, then falling away to the faintest of notes, gently probing the morning air, then rising again as the old woman danced like I have never seen anyone dance before, limbs weaving intricate patterns and feet beating a rhythm that was not of this earth. The young woman joined her, tentatively at first and then as she picked up the rhythm, in harmony so perfect that I could scarcely suppress the aching sigh that escaped my throat.  Their dance spoke of pure joy, and beauty so great, that my soul seemed to leave the confines of my body and join the women in their ecstasy. They danced among the flowing notes, moving faster and faster until all I saw was a glowing orb spinning on the block. My mind filled with all the happiest moments I had ever had, moments I had forgotten over time – they came so thick and fast, I was overwhelmed. Tears coursed down my cheeks as my joy mingled with the whirlwind of music around me, spinning me around until I became one with the music, soaring through the divine universe.

Then it was evening and I could hear the last notes fading away in some infinite distance. I became aware of my surroundings once again. The air was clean and cool, wonderfully perfumed, as if washed with rain. Lush vegetation grew all around me in wild profusion and the sounds of birds and insects reminded me of the ecstasy of the morning. I looked around. I could see no sign of the blocks around me, or the women. I stood up, unsteady on my feet and made my way towards the setting sun.