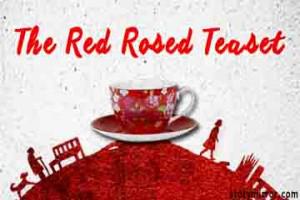 Granny loves to cook. She is the perfect hostess. Even when the means were limited she knew how to make the best of it and still share. Her famous dinners and tea parties were always talked about and her recipes handed down from generation to generation, family to family.
Being the matriarch of a family comprising of 3 sons, 4 daughters and 10 grandchildren, Gran has one principle. Whenever any one of her granddaughters gets married, Gran gives one item from her own kitchen to the girl, as a sign of good luck and as her personal blessing for a wonderful married life to come.

As she is ready to start her married life from tomorrow, after a hurried wedding and honeymoon, Niranjana with her husband Aniket, decides to pay her grandparents a visit to seek blessings from them .There is one more hidden motive for her visit. The red rosed tea set.

The red rosed tea set is somewhat like an urban legend in the family or maybe like a celebrity. It was given to Gran’s mother by her British friend in the 1930s. Beautiful, bone china tea set of the British colonial style, white with small red roses, it was exquisite. And more than the beauty, it was the enigma that the tea set held. When Nanu had visited Grandma to see her before the wedding, she brought him tea in the same tea set. The tea set was a prized possession of the family. Within limited means, it was the one item that made them proud to own it. It was treated with utmost care and was taken out only on very special occasions. Gran would not let anyone touch it and would even clean it herself. And then when her own daughters got suitors, the tea set was brought out again, first few times, not because of some superstition but because nothing else was available and then it became a regular thing.

Somehow, maybe just out of sheer coincidence, whenever the tea set was out things got arranged nicely. It was this uncanny, strange thing that defied all logic but somehow that worked like a charm. Every single time. It was somewhat like the Aladin’s magic lamp. Every single one of her cousins wanted that tea set as their wedding present but Gran was adamant. She would not give up the tea set. Niranjana, being Gran’s favourite was planning on getting the tea set for her own.

As the lunch came to an end, Gran made her famous Irish coffee and the four of them sat down in the backyard drinking it.

“Granna, you did not give me a wedding present. I am the last one of your granddaughters to get married and you know the rule. We all get something from your kitchen. ”, Niranjana said, putting her cup down at the wooden central table.

Gran adjusted her glasses and looked at Niranjana. Her small sweet Niranjana, the most beautiful and adorable of all her granddaughters. She used to call her Nira.

“Of course Nira, I haven’t forgotten. Tell me what do you want my dear and you shall have it”, Gran said fondly.

This was the moment. Niranjana loved Gran to the bones but even she knew that getting Gran to agree on giving her the tea set was going to be a tough task. One of the best things about Gran was, that for all her wisdom, her selflessness and her sheer and unwavering devotion for her loved ones, she was still a child at heart and held the tea set very close to her. It housed memoirs from her grandmother’s home, of the colonial British tea parties that she used to tell her grandchildren of, based on what she had heard from her grandmother. The tea set
was so dear to her that she had even risked the ire of her own sister in law, Nanu’s elder sister once when she asked to borrow that tea set, rather than let her borrow it.

So, Niranjana smiled her best and decided to give it a shot.

“Granna.. I want the red rosed tea set”, she said.

Gran was shocked. Not that she did not expect it. Every one of her
granddaughters, even her daughters had tried that trick on her. But this shock was different. It was laced with a hint of fear.

“Sweetheart, you know how I did not let any one of your sisters have the tea set. Now if I decide to give it to you it wouldn’t be fair to them. I have already selected a very fine, bone china dinner set for you. It was gifted to me by your grandfather on our first anniversary. It can be your something old and something blue,” Gran said.

“No Granna, I want the red rosed tea set. Nothing else,” Niranjana pouted.

Every reason failed her. Niranjana did not argue with Gran. But she refused any other thing as a wedding present. Gran looked at this girl fondly. There was a lot of herself she could see in Niranjana. Her beauty, her style, the way she talked. She then remembered the day she got the news that Niranjana was getting married. She was so happy that happy tears filled her eyes. A grandmother’s love
does not discriminate but Niranjana just somehow had carved a special place for herself in Gran’s heart. She sighed. All her other granddaughters had settled abroad with no plans of coming back. Maybe it wouldn’t be the worst thing to give Niranjana the tea set. And so with a heavy heart, she reached the top shelf, took the tea set out, gift wrapped it and gave it to her darling Niranjana. Aniket
offered to help her in taking out the tea set but the old lady was adamant. No one was allowed to touch the tea set.

Several months passed. Niranjana settled in her married life. Time flew bye. One fine Saturday when Gran visited Niranjana and both sat down for a cup of tea, Gran asked, “How did that office party for Aniket go, dear? Did you try the cutlets I told you?”Gran asked and also with a hint of caution she added tentatively “Did you use the tea set?”

Niranjana looked up from her cup of tea and stared into Gran’s loving eyes. She could not bring herself to say anything and thus before she could stop herself she started crying. Inconsolably.

“Granna, I am so so sorry, but the”, she hiccoughed. “The day before the party, when I took the tea set out, I don’t know how, but somehow the tea set cracked”, she said between hiccoughs.

As Niranjana cried in her lap, Granna was visibly crestfallen. As she patted Nira’s head, tears filled her own eyes and then as she asked Nira to sit down on the couch in front of her, she smiled.

“Ohh. Don’t you worry darling. It was a tea set, sure a beautiful one, but just a tea set. It happens.”, she said lovingly.

“No Granna, it was not any ordinary tea set. It had been in the family for generations and it housed so many memories for the family. I broke it all. I am a very bad person and very careless. I shouldn’t have asked you the tea set in the first place. ”, Niranjana argued and kept on crying.

As Granna looked at Niranjana, she saw her puffy red eyes and her heart just melted. She took Nira’s palm in her hands and said:
“Nira look at me. Now that we both are the only living ladies that ever actually housed the tea set, I must tell you something. You did not break the tea set.”

Niranjana looked at Granna in disbelief.

“No Granna, you are lying just to make me feel better”, she said.

“No Nira, listen to me”, Granna replied firmly. You did not break the tea set.

Sure it was a wedding present to me by my mother and all, but one fine day, when your mom was very little and we were moving houses, it got broken by your grandfather. I kept it with me just as a token of memory. Nothing else. And this was the reason I did not give that to anybody,“ Gran finished.

“But it was used several times after that too. For mom’s wedding and all the masi’s wedding and other house parties that Ma tells me of,” Niranjana asked, now more engaged in the tale of the tea set.

“Ohh that”, Granna laughed. “Since he was so guilty of breaking my tea set, your grandfather brought me an almost exact replica of the tea set. If you look very closely you will see that in all cups and saucers there is a line connecting all roses in the original tea set. It was not there in the replica. A small difference but visible to the fine eye.”

“So for all the other occasions you used the duplicate?”, Niranjana asked, dumbfounded.

“What else was I supposed to do?” Gran chuckled. “We did not have much money and so the duplicate stayed."

Niranjana looked up at Gran still not completely convinced. She could not believe what she just hears as the tea set had always been an object of an enigma to her.

She recalled, looking at it from the china cabinet in Gran’s kitchen and admiring it. Never did she realize that what appeared so perfect and desirable was so broken from inside.

She and Gran entered the kitchen where the pile of the cracked tea set was kept as is on the crockery shelf. As she went outside to take an urgent call from her office, Gran looked at the pile of broken china tea set and caressed it as though meeting an old friend. As her old wrinkled fingers touched the cracked crockery, she found, that hidden in the mound of broken cups and saucers was one saucer-
unscathed. She carefully took it out and held it in her hands as one holds something very dear. She wiped it clean with her scarf and kept it carefully in her handbag. What she missed, however, was an unscathed cup, with a line connecting the red roses.

As Gran bid her goodbye, Niranjana hugged her tightly and apologized, yet again. Gran looked at her adoringly and told her to forget it.

“At least now you have one less thing to wash”, Niranjana teased Gran. It was true. Gran absolutely abhorred doing the dishes. It was only the tea set that she used to wash. Even in limited means, she arranged for a maid to do the dishes back in her day.

“It is true.” Gran laughed. I could never ever wash a dish. Only the tea set could get this feat done from me.

“So Gran did you also use to wash the duplicate tea set? Nira asked.

“Ha-ha. Nira I used to do a lot of work. But now I need rest and so I must start for home. You take good care of yourself and your husband and forget about that tea set”, Gran added in mock scolding, skirting the answer in her own unique style. Poor Niranjana did not get a clue!!

That evening, after reaching her home, Granna and Nanu, drank tea sitting on their porch. Gran made her famous buttermilk biscuits and cutlets. Almost like a high tea. Just like the British. Nice view, good food, and a beautiful red rosed tea set with a fine line connecting the roses.

As a tired Gran looks at sunset, she hears the maid saying, “Granna shall I wash the cups and saucers too.?” As if waking from sleep Gran shouts, “Don’t you dare touch the tea set. Leave it off and do the rest of the dishes. I will wash the tea set.”