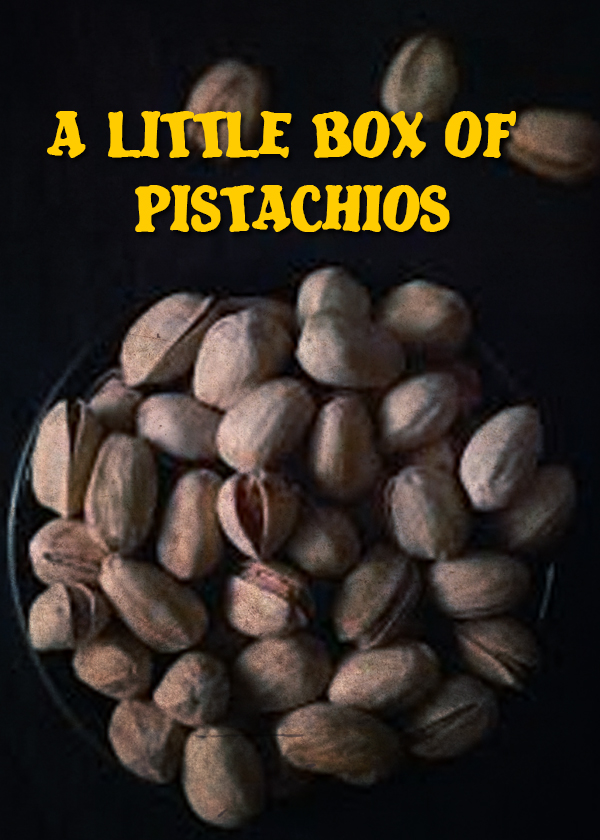 A Little Box of Pistachios

A Little Box of Pistachios

It was a dull day at work for Tani, and she was at her desk, whiling away her time by browsing through the internet. The sound of rapid typing on keyboards filled the Office floor, as everybody submerged themselves with the task at hand. The canteen boy, Vijay, was frequently making his way through the maze of desks, serving piping hot ‘cutting chai’; a clinkering noise being made every time he placed a miniature glass of tea on each table. Intermittently, the office landline adjacent to her desk rang, the sound increasing in ascending order, due to a technical defect in the telephone model. The large printer at the far end of the floor contributed to the

clutter of noise, continuously tossing oodles of typed papers. It sounded, as if the printer was calling out the phrase “Check out, check out!” in quick succession. As Tani peeped over her desk, she could only see a sea of bald heads. They were carefully sipping on their glass of tea, flipping through the files at hand and typing out

Tani stretched her hands, to shrug off the boredom and looked inside her drawer.  There was nothing interesting there either, except a half empty box of pistachios. She took out the little plastic box and placed it on her desk. It was a gift from a friend, who knew how much she loves pistachios. The box had been her favourite in the first

few days, whenever she wanted a snack break from the tedious work at hand. It was an activity she looked forward to – cracking the pistachios open and eating them. She took care to consume only a limited amount every day, to ensure that the box lasted long. It had been almost a month of savouring, and now, it was nearing an end. She counted the last few pistachios left – there were 13. But these 13 pistachios were absolutely shut, making it impossible for her to crack open. For the last one week, she had placed them on her desk every day, trying every trick on the book to open them. She had exerted as much pressure her hands could, to crack them, but none

gave in. She had used her teeth to crush the pistachios as hard as she could. But even then, nothing had happened. She had hit the pistachios on her desk, thrashing them incessantly, one by one. The people around her desk had stared at her that day, making her feel like a heinous criminal. But the pistachios remained stubborn, holding their ground tight throughout. She did not want to throw them in the dustbin, although she was aware that some of the resident rats would have a feast out of it, when they came scampering around at night. So there she was, stuck with a box of 13 pistachios, which she could not have. She could gape at them as much as she liked,

but they would not belong to her, ever. All these days, when she had put the box back in her drawer, she had thought that if she could not see them, she would not long for them. She strongly believed that her desperate need to have them, would soon pass. But it had been a week, and she still could not fathom the fact that the pistachios

could not be touched. “Unlucky 13”, Tani told herself, and pushed the little box to one corner of her desk. A feeling of defeat and despair engulfed her.

Her musings, however, were cut short when Vijay appeared with the last round of tea servings for the day.

"Madam, kuchh chahiye?” (Madam, do you want something?)

“Ek cutting”, she replied, asking him to keep one glass of tea for her.

As he picked up a glass from his tray, his attention fell on the little box tucked away

in the corner of the desk.

“Woh kya hain Madam? Pista?” he asked, pointing to the box of pistachios.

She nodded a yes. “Lekin who kha nahin sakte. Bahut sakt hain” (You cannot eat them, they are hard to crack).

As Vijay left, swiftly meandering his way out, Tani pondered over his words. “Place them in the hinges of a door”, was what he had said. Why did she not think of this before? She could have easily carried the box home and placed the pistachios between the hinges of a door, as Vijay suggested. All she needed then, was to shut the door. It was so easy!

Tani took the box from the corner of her desk and put it inside her bag. She would try out Vijay’s proposition, first thing after going home that evening. A few wreaking shrieks of the door would easily break the pistachio shells, she thought. Once open, she would, may be, sprinkle some salt on the pistachios and eat them. It seemed like a plan. She sat back on her chair, relieved. The Office cacophony, in the background, continued in the same beat – sip, flip, type, repeat.