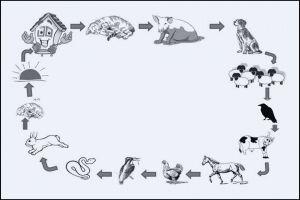 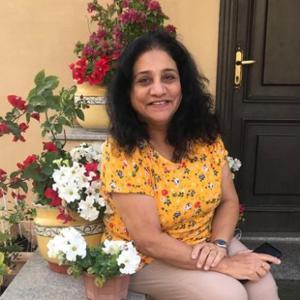 The sprawling farmhouse yawned stretching its arms out to the sky as the sun rose in the east spreading a warm golden glow.  The black and white cat shook itself awake and as the red wooden windows rattled to the sound of the passing truck fell off the mantelpiece hitting the floor with a thud and a loud meow.  Tail between the legs it ran out into the barn, tripping over fat little piggy’s pink little outstretched legs slamming into the pole and falling asleep again.  The little piggy pulled its legs in and rolled over crushing the little piglets nestling under her as she rose and grunted her way out to the trough and dipped her flat pointed nose into the water.  The little yellow duck flapped around annoyed as the fat little piggy ran off dripping water on sleeping black dog on the hay bundles next to the trough.  The black dog growled at the piggy as the water splattered on its coat shaking the water off its body, and bounded off running after the sheep in the lush green fields shining in the sun.  The sheep ran helter skelter as the black dog snapped at their heels wailing baa baa, scampering up the hillock, while the cows stood in disdain watching them run as they sat there chewing at their cud, flicking their tails at the flies buzzing around them.  The black crow flew down and sat on the cow’s back, skipping up and down as the tail flicked over its back like a little girl with her skipping rope.  Nipping at its back, the cow’s tail hit the crow hard and off the crow flew to the topmost branch of the big tree and cawed and cawed. The brown horse fed up with the caw caw sitting under the tree hit the trunk of the tree with its hoof and watched the crow fly off in fright into the sky.  The brown horse dropped its head with a sigh and lay down basking in the shade of the tree watching the hens clucking close by.  Cluck-cluck went the hen and its trail of five chicks as they pecked at the ground near the beautiful pond. In went a chick and cheeped pitifully as the mother hen ran along the river bank ordering it out.  Cheep-cheep went the chick as it clambered onto the floating bark holding on for dear life as it floated around the pond on the back of the big fish below.  The ripples in the water pushed the chick to shore as it ran out of the water, turning its nose up at the big fish circling the pond, diving in and out of the water as the bright little kingfisher hiding in the reeds watched carefully ready to strike.  Down swooped a bright red and blue kingfisher and grabbed the struggling big fish and flew up to the reeds to settle down to lunch.  The reeds began to rustle as the kingfisher ate away blissfully unaware. Out came the snake and grabbed the red and blue kingfisher in its fangs as the big fish slipped back gratefully into the water.  Zigzagging its way through the reeds holding onto the red and blue kingfisher, the snake flipped over a rock and dropped the red and blue kingfisher and hissed in anger watching its prey rise to the highest branch of the tree as the little rabbit hiding in the reeds cowered in fright as the snake rattled past without noticing.  The little rabbit jumped into a burrow in the ground down the passages past the worms and the roots straight into the cellar of the house, jumping around to escape the hand picked him up by the ears and carried him up to the room.  The rabbit twitched its little whiskers wriggling to get free and dropped to the ground scuttling under the bed as the hand reached out again.  The hand chased the rabbit as it ran from one end of the room to the other, down the stairs, tail between the legs out into the barn and frightened the sleeping black and white cat who ran into the farmhouse and fell asleep on the mantelpiece as the sun set began to set in the west. The farmhouse yawned sleepily and stretched its arms out to the sky as the sun wrapped up its rays and sank into the sea and went to sleep.