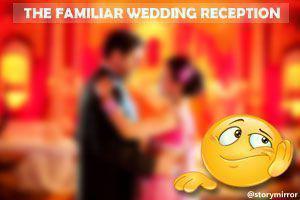 “Not another wedding reception!” groaned Ramaswami as he reluctantly took the outlandish gaudy wedding card with tassels from the courier boy, signing sleepily the silly slips writing out his telephone number. He yawned standing in the hall scratching his head, roused from his afternoon nap as his wife called out to enquire who at the door was.

“One more wedding card, Sheela. This is the fourth wedding we are invited. Why should I go to this Mehta’s wedding? Who is he?”

“Show me the card. Oh! It’s Mehtaji. How can you forget Mehta? He was with me when I was working with Acme Company. You remember we met him in that mall that evening. He is an amateur magician.”

“No. I don’t recall any such fellow. Sheela, in any case, I would not like to go for a wedding just because I met him for two minutes at some mall. You go if you want to. It is at some out of the way place in Borivali.”

“I would love to go for the reception to meet my old colleagues. See, he sent a special invite by courier. Shows his concern and courtesy. How can I go alone?  Ramu, you must join, please. Even you are invited. Besides, Suresh may come with Laxmi. You remember Laxmi was employed in the same company for a while long back.”

Ramaswamy knew he had no alternative. Suresh is his son who lived in far-off Powai with his wife. Events like receptions were tiresome. His wife, however, enjoyed going to places, socializing and meeting people.

On the day of the reception Ramaswamy was struggling with his old car, negotiating narrow lanes congested with jaywalkers, animal-drawn vehicles, and shining new cars. By the time they reached the venue a fairly large crowd had piled up inside. The hall was in the midst of a large open ground surrounded by a garden with flower beds and greenery. The access lanes, capillary size, were badly maintained, and the guests who struggled to alight from the small doors of their cars blinked as they stumbled along the way. There were loud welcomes as they entered the premises. The sounds of the closing of car doors, one after another, the discordant music of cars reversing, and the impatient honking with the swearing of the drivers competed with some crows nesting above. Ramaswamy was watching all this with some distaste as he walked into the arched entrance, lighted and decorated. Someone thrust a single rose on him while unseen hands sprayed scented water on his shirt. Everyone was greeting everyone else and smiling pleasantly.

Once inside, he sat all by himself on one of the chairs placed in countless rows and was able to observe leisurely the invitees who arrived steadily. His wife was lost in a group of her old friends and mixed up in the crowd like an ingredient of a cake. This was a cross-community marriage.   A mosaic of human beings arrived, in all shapes, sizes and age groups, friends of both families, office colleagues, neighbours, and dozens of relatives with their dependents. Here was a wedding between a Gujarati boy and a Parsi girl. Every stranger was presumed, on the safe side, to be connected with the other side. Silvery haired octogenarians in gorgeous sarees stared uncertainly through glasses trying vainly to identify those around them and place their status. They cackled loudly in groups while their husbands, dressed in three-piece suits looking hot and lost, stood diffidently a few steps behind, fiddling with their ties as though stranded. Some of the guests were arguing loudly with others who seemed to be veterans in the fields of banking, finance, industry, and insurance - each vociferous on various issues of controversy – and posed as self-styled experts.

Elsewhere, in a sea of colourful humanity, there were islands of boisterous reunions where old classmates and office colleagues embraced with much back-slapping, vigorous unending hand-shakes and eager enquiries. Ladies sporting bizarre hairstyles, in dresses that revealed entire bare backs and arms debated on topics of fashion and page 3 politics of the day.   In all this the uniformed attendants of the caterer served icy coloured drinks and small eatables on trays. Several glasses of the coloured stuff were downed absent-mindedly in the melee, not that they were thirsty but because it was put in their hands. Now loud music poured from amplifiers cleverly hidden in the greenery as rows of coloured electric bulbs winked at the gathering. Everyone was either holding a hand to the ear to catch a word or tried shouting across to be heard.

His wife rushed looking annoyed and frowning and informed Ramaswamy that the son and daughter-in-law have not turned up so far. Laxmi can never be punctual. It’s all her fault, she said and disappeared once again.

The bride and the groom have not yet arrived. But at last, his son and daughter-in-law looking young and radiant came and Ramaswamy was relieved. Now, the long arm of hospitality from both sides shepherded the guests to the counter at the far end serving hard liquor. They shuffled happily to that blessed drink counter without much persuasion. More guests arrived and it was becoming difficult to walk easily without encountering some stout female who was obstructing those in front with some gymnastics known only to her. A fellow with a stentorian voice was announcing something, interrupting the loud music from the amplifiers. The crowd was lapsing comfortably into some form of semi-coma. Ramaswamy developed a headache. Where did they get these lousy songs from? For the last half an hour he was listening to utter rubbish, songs that he had never heard so far and did not want to hear ever again.

Ramaswamy sighed immensely relieved on seeing Qureishi, his old friend, coming towards him.

Qureishi asked, “What are you doing in this mess?”

“I just came because of my wife. You see, I don’t know a soul here. That catering boy recognized me. This was the same caterer in the last several weddings I have been attending.”

“Don’t rub that in too hard. You know me well.”

“Don’t worry. You will get used to it. I know Mehta well. Was in college with me.”

“How did he go in for this Parsi girl? Do you know her? I understand that his family is very orthodox.”

“No. I don’t. Looks like a quiet affair. Must have caused a storm in his house. And now my friend, I must go and find other friends. See you, Ram.”

Ramaswamy fell into silence. The loudspeaker was alive once again with an important announcement that the bridal couple after their visit to a shrine, are on the way. Guests were requested to join for dinner to avoid congestion at the food counters after which they could greet the couple at leisure. This brought a favourable response from several who looked bored and annoyed waiting for over an hour. They rose like a wave to move guided by the easily recognized smell of buffet food at marriages. Whether it was the same recipes or same cooks or the same masala, the food smelt uniformly depressing. Food left-over from yesterday or this morning’s function elsewhere was resurrected and served hot that night. Sheela with son, daughter-in-law and joy all over her face joined the serpentine queue of stout well-fed men and women holding heavy plates. At the counter they were greeted by shabbily uniformed unshaven attendants. The guests piled food in large quantities as if they had not eaten for years. The ice-cream counter was assaulted last before going in for paan. Finally, there was more standing in the longest queue holding gift-wrapped presents or envelopes as couples after couples were greeting the newly married couple and the words ‘happy married life’ were heard over and over like some stuck-up gramophone record. Ramaswamy traced Sheela and they both stood patiently. He observed to his wife that while he agreed on ‘married life’, there seemed to be no conviction in the many voices when they used the word ‘happy’.

Sheela’s reply was not audible.