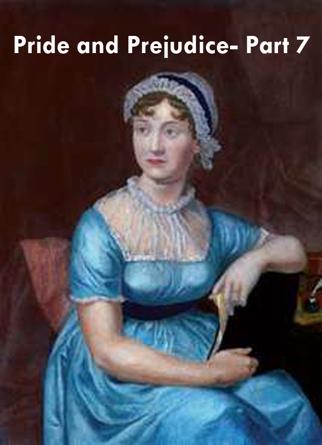 That evening Elizabeth decided not to go to Rosings. The agitation and

tears had made her feel ill. When the others were gone she sat down to

reread Jane's letters. They did not speak of the past or of present sufferings.

But all Jane's peace of mind and happiness were gone. That Mr Darcy could

be proud of the suffering he had caused made it worse. She was glad to think

walked into the room. In a hurried manner he asked if she was better. She

answered him with cold politeness. After a silence of several minutes he

came up to her and began,

'In vain have I tried, but I cannot. My feelings are too strong. You must

permit me to tell you how much I admire and love you.'

Too surprised to speak, Elizabeth looked at him in silence. He continued,

telling her all that he felt and had long felt for her. He spoke well, but not

only about his feelings of the heart. He spoke as much of his pride, of her

inferiority, of the objections to her and her family. To marry her would be a

Elizabeth disliked Darcy, but she felt the compliment of such a man's

affection. At first she was sorry for the unhappiness she must cause him.

which he was unable to resist, and of his hope that she would accept his

proposal. As he said this, she could see that he was sure of a favourable

answer. When he was silent, she said,

'It is, I believe, usual to express one's obligation, even where feelings are

not returned. If I could feel thankful, I would now thank you. But I cannot. I

am sorry to cause suffering to anyone. It has not been done intentionally,

however, and I am sure it will not last long.'

Mr Darcy heard her words with anger and surprise. After a long silence he

'And this is all the answer I have the honour to expect! I could, perhaps,

ask why, with so little politeness, I am refused like this. But it is not

'I could as well ask,' answered she, 'why, with the clear intention of

offending me, you chose to tell me that you liked me against your will,

excuse for impoliteness, if I was impolite? But I have other reasons. You

know I have. Had my feelings been indifferent or even favourable, do you

most beloved sister? I have every reason to think ill of you. Nothing can

excuse what you did there.'

She stopped, and saw that he was listening with a manner which showed

him unmoved, a smile of disbelief on his face.

'Can you say it is not true?' she asked.

from your sister, or that was not pleased at my success.'

'But it is not only this,' she continued. 'Long ago, your character was

shown in the things I heard from Mr Wickham. On this subject, what can

you have to say?'

'You take a great interest in that gentleman,' said Darcy.

'And all your fault,' cried Elizabeth. 'You caused him to be poor. You kept

from him the advantages meant for him, and yet you can speak of him

'And this,' cried Darcy, as he walked with quick steps across the room, 'is

your opinion of me! I thank you for explaining it so completely. My faults

are great indeed! But perhaps,' he said, stopping in his walk and turning

towards her, 'you would have considered them less if your pride had not

suffered, if I had flattered you more. But I despise hypocrisy. I cannot

apologise for my feelings. They were natural. Could you expect me to be

happy about the inferiority of your connections?'

Elizabeth could feel her anger growing, but she tried to speak quietly when

she said, 'You are mistaken, Mr Darcy, if you think that the manner of your

proposal has made me feel anything but glad. Now I shall not feel sorry

about refusing you. I would have, if you had behaved in a more gentle manlike

She saw him look up at this, but he said nothing, and she continued.

that would have made me want to accept it.'

'You have said enough, madam. I completely understand your feelings. I

apologise for having taken up so much of your time. Please accept my best

wishes for your health and happiness.'

With these words he left. Elizabeth did not know what to think. From

weakness she sat down and cried for half an hour. Her surprise was greater

every time she thought about what had passed. That she had received an

offer of marriage from Mr Darcy! That he had been in love with her for so

many months, so much in love as to wish to marry her for all the objections

against her. She could not believe it. It was gratifying to have caused so

strong an affection. But his pride, his despicable pride, his shocking story

of what he had done to Jane, the unfeeling manner in which he had

mentioned Wickham soon stopped the pity she had felt for a moment.

Elizabeth woke the next morning to the same thoughts and feelings. It was

impossible to think of anything else. After breakfast she decided to take a

letter which he asked her to do him the honour of reading.

When he had gone Elizabeth opened it and read,

Do not fear Madam! a repetition of those sentiments or offers which were

fast night so disgusting to you. I shall not speak of wishes! which, for the

happiness of both of us! cannot be too soon forgotten. It was! however

necessary for me to write this fetter and I must ask you to read it.

Last night you told me of two reasons for your dislike of me. The first was!

that without thought for the feelings of either, I had separated Mr Bingley

from your sister; the other that I had against the wishes of my father

ruined the future of Mr Wickham. To have abandoned the friend of my

youth! a young man with no fortune who had been taught to expect our help

would be scandalous. It cannot be compared to the separation of two young

people whose affection was only a few weeks old. I hope that you will

understand both situations when I explain. I had not been long at

Netherfield, before I saw that Bingley liked your eldest sister. On the

evening of the dance I saw that his feelings were serious. I had often seen

him in love before. At that ball I first understood that Bingley's attentions

to your sister had caused a general expectation of their marriage. I watched

your sister. Her look and manners were open! but I did not believe her to be

in love. If I was mistaken, your anger is understandable. But there were

other reasons against such a marriage.

behaviour, that of your three younger sisters, and even of your father. I am

sorry if I offend you.

returning. His sisters and I had spoken of of the matter; they felt as I did.

to his choice. But I could not have stopped the marriage if I had not

convinced him of your sister's indifference. On this subject I have nothing

more to say. if I have Made your sister suffer it was not done intentionally.

As for Mr Wickham, it is best if I tell you the whole story. MrWickham is

the son of a very honourable man, who for many years was the steward of all

the Pemberley estates. My father, wanting to help the son, gave him a good

education. He hoped George Wickham would go into the Church. I long ago

began to see his true character as my father could not. My father died five

years ago. He asked me to help Mr Wickham as best I could, and to give him

a family living as soon as possible. Half a year later Mr Wickham wrote to

inform me that he had decided not to go into the Church, but wanted to

study law. he hoped I could help him. The business was soon settled. He gave

up the Church and I gave him the money to study. All connection between us

seemed now finished. He lived in London for three years, but he did not

study. Then he wrote again telling me he had decided against law and asking

for the living my father had promised him. You will understand that I

refused. After this the last connections stopped.

Until last summer. I must now mention a matter I would like to forget

myself, one I have not told any other person as I am sure you will not. My

sister, who is ten years younger than me, finished school last year and went

to live in London with a lady in whose character we were unhappily mistaken.

In the summer they went to Ramsgate, and so did Mr Wickham. With the

girl. She believed she was in love with him and agreed to an elopement. She

was only fifteen. I am happy to say that she told me the story herself when

I joined them a few days before the event. You can imagine how I felt. Mr

Wickham was clearly interested mostly in my sister's fortune, but I think he

would have been glad to make me suffer. This, madam, is the true story of

the matters we have spoken of. If you do not believe me you can ask Colonel

Fitzwilliam who knows everything. I shall try to give you this letter in the

morning. I will only say, God bless you.

With a strong prejudice against everything he might say, Elizabeth read

Mr Darcy's letter. She had to read it many times before she could begin to

understand it. That it was true she had to believe, although her feelings were

shocked and her pride suffered. She was completely ashamed of herself. Of

neither Darcy nor Wickham could she think, without feeling that she had

been blind and prejudiced.

'How despicable I have been!' she cried.

'I who was proud of my understanding. How mortifying is this discovery!

If I had been in love, I could not have been more blind. But vanity, not love

has been my weakness. Pleased with the preference of one, and offended by

the opinions of the other, from the beginning I understood nothing. Till this

moment, I never knew myself.'

Darcy wrote that he had no suspicion of Jane's feelings. Elizabeth

remembered what Charlotte's opinion had always been. Neither could she

deny the justice of his description of her sister. It was true. While Jane's

feelings were strong, she showed them little.

such a mortifying manner, her feelings of shame were strong. What he wrote

was true. It was hard to think that Jane's present unhappiness was the work

of her nearest relations, to feel how both she and Jane must suffer in the eyes

of society because of her family's improper behaviour.

visited to take their leave. Colonel Fitzwilliam had sat with them an hour

hoping for her return. Though she said she was sorry, Elizabeth was not

unhappy. Colonel Fitzwilliam was no longer interesting to her. She could

think only of her letter.