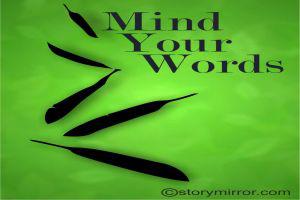 Raju was a short tempered man. Though he did not intend to hurt anyone, his temperament had become a cause for concern. The reason was that he wasn’t not able to hold his nerves and the heat of moment would lead him to even use abusive language and insult others.

Realising his mistake, one day Raju went to seek the preacher’s advice and ask for forgiveness. He promised that he would do whatever the preacher asked him to do.

Raju now knew that none other than his own conscious effort could help him.