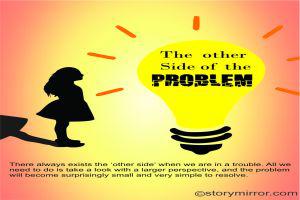 It was a holiday and Manu was reading his newspaper when his little daughter Juhi came around and tried to gain his attention. She would do this every now and then to distract him. Manu came up with an idea. He thought that if he could only involve little Juhi in some activity, he would be able to spend some quiet moments to himself. He thought of an idea. He tore away a sheet of newspaper where a map of India was printed. Then he asked Juhi to solve the jigsaw puzzle. “Ah! I am sure Juhi won’t return before an hour,” he said to himself.

He handed over the torn pieces to Juhi and took a sigh of relief. But then he was astonished to see her back within minutes... with the perfect map! He couldn’t believe himself and asked how she had managed to do this so fast. Juhi very innocently explained, “Dad there is a picture of a big car on the other side of the paper. All I did was to assemble the car right to get the map right! After saying this, she left her father puzzled as she joined her friend to play outside.

Manu had unknowingly learnt a lesson of life. The little girl had taught him that there is always another way to solve a problem or tackle a situation. There always exists the ‘other side’ when we are in trouble. All we need to do is take a look with a larger perspective, and the problem will become surprisingly small and very simple to resolve.

The 'Other Side' Of The Problem