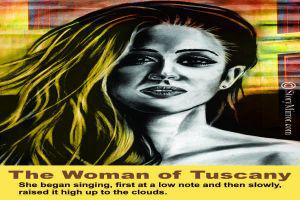 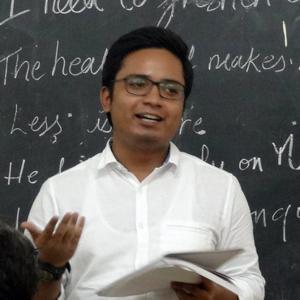 I was in a garden. I felt the wind pushing me back with her soft and cold hands, touching my face, playfully disheveling my hair, making me step back, like a naughty lover.  The sky was painted in mesmerizing bright colors. The air was fresh and the weather was sunny.

My eyes were closed. I breathed deep and slow. I was overwhelmed with the sweet smell of ripened juicy water-melons, the taste of cucumbers, tomatoes, nostalgic chirping of birds, and the surreal touch of running my hand through rows of iridescent flowers. I was going to miss so much. There, I felt at home, like I was tucked into bed at night by my mother. I desired to soak in the art, in the air of Tuscany, which I could see and smell but could not grasp.

I walked into a village. It felt like I was carried by a wave of melody, taking over me, lifting me for a moment and then throwing me away. Tremors of joy chimed in my body. The streets were paved with stone; old brick buildings were fading away but with grace, swaying dark-brown wooden windows beckoned with aromas of Italian cuisines rising from them and flushing the streets:  freshly baked breads, pastries and cheese.

In a corner, by a small house, there was a wooden bench, calling me over like an old friend. I sat down on it and felt more at peace. In Tuscany, everything has a soul - the air, the birds, the plants, the buildings and also that wooden bench by the corner; they call out to you. I closed my eyes again. I wanted to squeeze the nectar of every moment.

I don't remember how long I sat on that bench as if I was born there. Everything was calm. It felt serene and beautiful. Every now and then, scent of flowers arose, tantalizing my nose, gushing in and filling my lungs. I felt joy. I believe that what soothes my nerves, takes me closer to the truth…my purpose.  I was breathing deep and slow, drinking the red wine of nature, enjoying the stillness. Every distant flutter was music and every frail scent was perfume. It was soulful as if something beautiful had clasped its hands on my eyes while I faced a starry night sky, marveling at the grandness of heavens through the gaps between its fingers.

I took a dive in a deep inner ocean, swimming past painful memories and anxiety evoking worries; something was radiating light at the bottom of the ocean. I pushed back the water with fervor, I reached there and there it was! The wooden bench, glorifying the present.  It felt spiritual. It felt mysterious.

I was pulled back from the depths by white doves darting overhead, fluttering away; when I opened my eyes, the musical rhythm of their fluttering wings was survived by a small white feather on my thigh. I brought it up to my eyes and that is when I saw her. In a building, in front of me, she was standing in a small balcony with her hands on its rust adorned iron balustrade. The balcony was doused in the golden gleam of her skin. She was tall and dazzling: wearing a becoming purple gown, her long, brown, curly hair blew back due to the mischievous wind. She was twisting one of her hair locks while smiling at me with eyes deep as abyss. I felt fear of losing her without even having her. I was terrified by the ephemeral nature of that moment. I was frightened and captivated at the same moment like a nubile looking at a bridal gown through the glass window of a store.

Then she grimaced and looked away.  Inadvertently, my hand moved over my chest, over my heart; it bruised my hand red like a broken shard of glass. I was in pain. I was still looking at her. She had cast a spell on my spirit. Then she took a deep breath, closing her eyes and puffing her chest. Was she trying to seduce me? She let out a soft moan. I waited with bated breaths, my heart stopped beating to watch, while my blood was turning toxic and burning my nerves. It was cruel.

She began singing, first at a low note and then slowly, raised it high up to the clouds. I didn't understand a word of Italian, but my body turned red due to the surge of blood and passion. Her song was honey to my ears, sweet but with a bite. I was trembling with love, shaking with disbelief, horrified that the moment would pass. She was drawing my soul out of my body. I was teetering on the brink of crying. It seemed that she has been singing all my life, as if I became alive only when her song began. Her song echoed across the skies, attracting clouds from far away to rush towards her and they did.  She continued singing, maybe I reminded her of a past lover.

Swarms of clouds began swirling over our heads. Due to the increased humidity, a sweat broke down behind her ear. It circled from back of her neck to her front, and gradually inched towards her cleavage, arousing and pinching me. Maybe, I was hallucinating. Then suddenly, lightning precipitated from the skies, light first and thunder later; its purple light illuminated her face. I saw salty streaks of tears on her cheeks.

The thunder anguished my ears, poured a boiling ringing sound in them as if scolding me for daring to love her dear daughter. The clouds screamed once more and it began raining, with drops thick as pebbles, as if they were trying to stone me to death. She stopped singing, overwhelmed by the tragic romance in the rain.

She stood in the balcony for seconds, with her open palms facing the sky, letting the rain punish her for her mistakes. Then she turned, walked back a few steps and then she stopped, and slightly turned her head; an askance which quickly turned into a painful smile, her both first and last smile.She left me. I was torn apart. I didn't know how it happened but moments later, I had scribbled a poem on a piece of torn page of my diary. I crumpled the paper and threw it with all my might, towards her balcony. It went away from my sight, through the balcony and into an open door. I did wait for minutes, but she never came back. I did not climb up the balcony, to claim what could never have been mine. The poem read as follows.

"The woman of Tuscany

I was sitting on a wooden bench,

drinking wine of peace and harmony,

she flew in a flowing purple gown,

singing deep and high, standing in a balcony,

I knew that she would be my life's tragedy,

she did burn my heart later; a true epiphany,

I crave her purple gown, face and euphony,

I feel married to her without a ceremony,

she is my beautiful dream’s and nightmare's cacophony,

till I die, I won't forget the woman of Tuscany. "

The Woman Of Tuscany