Quotes New
Audio
Forum
Read
Contests
More
Write
Sign in
Wohoo!,
Dear user,
A Palace That Was Made Single Handedly By A Postman
Like
Liked
Rate
Like
Liked 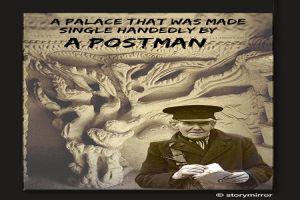 A Palace That Was Made Single Handedly By A Postman
★★★★★

Ferdinand was a 43 years old postman who dealt with his job rather passionately. Stamps, postcards, nature, magazines and cards of various types always enchanted him. One fine day as he was going on his job, he tripped over a stone which was quite unusual and strange. This stone caught his fantasy and he secured it in his pocket. From that day onwards, Ferdinand became more cautious about that route, not because he had tripped, but because he collected several such stones and pebbles from there. His mail rounds had now become more interesting. Eventually, Ferdinand started collecting them in bags and wheelbarrow.

Ferdinand started building a castle by using these stones out of his sheer inspiration and imagination. He bought some cement and lime mortars and spent his next twenty years making the outer wall of his dream palace! He worked on his palace after work hours with a lamp oil to help him see at night. And he worked all alone! He followed his dream until he completed his extensive work of art wherein he portrayed various birds, animals, giants, fairies and even mythological figures from different countries.

His finished work was 85 feet long and he took more than 9000 days to accomplish his dream. His work is so enthralling that over one lakh visitors come to witness it each year. The lesser known village of  Hauterives (North of Valence) is recognised due to this dream palace made by Ferdinand. He named it as ‘Palais Ideale’.

The story of Ferdinand does not end here. Though in his seventies by then, he made an incredible mausoleum for himself in a nearby village cemetery. He worked on it for eight years and called it the ‘Tomb of Silence and Eternal Rest.’ Ferdinand Cheval was buried there in 1924.

Ferdinand’s piece of art is believed to be the most extraordinary work of architecture and has made its own distinction when compared to all other artistic trends of its time. His finished conception shows an influence of Hindu and Christian architecture that has become an inspiration for artists all across the world. Since his work follows no particular rules, it is regarded as unclassifiable yet universal.

A Palace That Was Made Single Handedly By A Postman