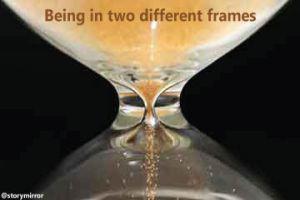 Being In Two Different Frames
★★★★★

When we finally selected one of my mother's photograph to put on display for her post-death ceremonial purpose, I plunged deep down in the narrow lanes of my memory and reached the point of time when that particular photograph was taken. I was the one who had clicked her in the moment, suggesting her a pose for the perfect click. That was a bright morning of a cheerful vacation. We were clicking for each other in turns, trying to capture the happy moments of our family trip.

I could never have imagined in my worst nightmares that I'd have to use that picture of hers, one of the rare moments of vacations captured in a blink of an eye, from a sunny day in the joyous month of April, for display in the name of highest reverence, remembrance, and farewell, 7 years later.

She was young then, but sick, very sick. Just a glance at the photograph that now stands in frame beyond the reach of my touch has driven me back in time. She still is that lively, cheerful, vibrant lady in a pink-hued sari behind that frame, and in front of it are her children and husband squatted with teary eyes and hollowed hearts.

The two frames of time are merely separated by a semi-translucent glass frame. For a moment, I wonder what if the other side of that frame reaches out to this present time. It would have freaked out the person on the other side clicking the photograph. Are the two instances really separated from each other? Are the people on the different sides of frame different from each other? The thoughts of dependency and independence of the two instances fill me with horror. The horror of the oblivion that emerges, as the distance between the two frames of time increases. The horror of forgetfulness that might follow on either side. The horror that one of the people in the past frame of time might not be present to look at their own face, to witness the changing times, in the present frame- the frame that is gloomy but inevitable.

Being In Two Different Frames