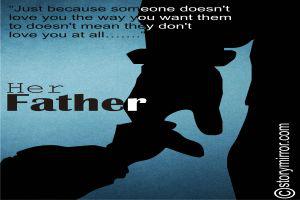 Nupur was the only child of her parents and also the eldest granddaughter of her family. She was the apple of her family’s eyes. Everybody adored her and she enjoyed being the center of everyone’s attention.

Nupur had working parents and thus she used to spend a lot of time at her grandparents place. Her grandparents were very expressive and active in their social circles. Nupur’s mother was also an extrovert. Nupur’s father was the quiet one. He had lost his mother at a very young age and was brought up by his stepmother. He was not very expressive like Nupur’s relatives and kept to himself. Nupur being the only child and being born after 10 years of marriage, he truly believed that she was the special gift from God and doted on her. She meant the world to him. But the only hitch was, Nupur did not see this and he was not very effective in his expression.

He was also a complete workaholic and spent very little time with his daughter. Whenever she would excel in her academics or co-curricular activities, everyone would heap praises on her. But he would simply smile and say “Do better next time”. Because of this and him being an introvert, Nupur felt that he did not love her at all. She used to always see her friends’ fathers dropping them to school, picking them up, playing with them, taking them to parks, restaurants, movies etc. All Nupur did with her father was go to temples or watch him do his office work even at home.

His work involved extensive travelling and sometimes he missed being on festivals and her birthdays. This irked her even more. She longed to cut the cake with both her parents holding her hand. Her mother and grandparents did their best to make up for this, but she kept harboring such feelings towards her father.

The highlights of Nupur’s life were the gifts from her father. His work made him travel abroad very frequently and he used to get lots of exquisite gifts for his daughter. She was the center of envy among her friends. Her clothes, shoes, school bags, school stationery, toys would all be bought from abroad. She used to always have a stock of foreign chocolates in the refrigerator. But none of these things mattered to her. All it mattered was her father did not love her just like the way her grandparents or her friends’ fathers did.

As the years progressed, her resentment increased. Everyone around her made her realize that just because someone didn’t love you the way you wanted them to, did not mean that they did not love you at all. Her father worked hard only to ensure that Nupur had the best life. He used to never buy a single thing for himself or his wife when travelling abroad, just because he could save the money and buy the best gift for his daughter. Stupid Nupur just failed to see all this.

Just a few days before her 15th Birthday, Nupur had been to her cousin’s place in another town. She had spoken to her parents on her arrival. She was having a great time when in the evening she got a call from her mother. She froze when she heard her mother crying over the phone. She always knew her mother to be cheerful, but her voice made Nupur guess that the news would not be a pleasant one. Confirming her fears, her mother tearfully explained that her father had met with an accident while riding a two wheeler and was admitted in ICU. He was in a coma and was under monitor for 24 hours. Nupur had to start immediately so she could reach her town the next day.

The first thing she did on reaching her home was to rush to the hospital. She learned later that her father was riding a two wheeler and on one stretch there was a road construction going. They had piled pebbles on one side of the road. Suddenly out of nowhere a dog came in between and he lost his balance and fell on the road. His head hit the road and as a result he suffered brain hemorrhage. One of the neighbors saw him lying unconscious and took him to the hospital and alerted the family. There amidst the beeping machines, she saw her father lying helplessly for the first time. Her heart went out to him and her mother. The doctors assured her that he was stable and if this continued, he would soon be out of danger.

Everything was fine till evening and suddenly his condition started deteriorating again. The doctors rushed to him and started treating him again. Once they were out, Nupur and her mother went in to see him again. Her mother had kept a brave front till then, but the sudden change in his health made her lose all the confidence. She gently stroked his head and almost in a whisper said, “Please don’t leave us and go. Nupur and I will be left all alone. We both love you very much and need you”.

They say that when a person is unconscious, there is a part of his sub-conscious mind which is still active. Maybe her mother’s words reached there and suddenly Nupur noticed a small tear fall from his right eye. This was enough to melt her heart. That one small tear made her realize her father’s love for her. She suddenly realized how much he doted on her. All the hard work that he put in was only to ensure that she got the best of everything. All the money that he spent in buying gifts for her was only to see her happy. She started praying God to recover him soon. She would first tell him that she loved him very much and was very proud to be his daughter. So what if he spent so little time with her? She would tell him that he meant the world to her. She would tell him that she loved each and every gift that he bought for her. She would tell him that no matter whether he expressed it verbally or not, she knew that he loved her just as much. God! There was so much to tell and so little time…

Later that night, her father developed another complication and passed away. This crashed Nupur’s world completely. If only she had reciprocated his feelings… this wouldn’t have brought her father back but at least she would have felt less guilty. Then suddenly, the words which was said to her a very long time ago rang in her ears, “Just because someone doesn’t love you the way you want them to doesn’t mean they don’t love you at all…….”