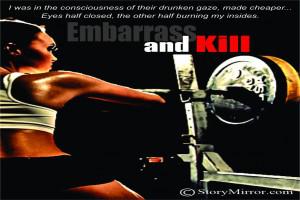 So it was 3:30 pm and I was on my way to the society gym which has a few basic machines good for men and women who aren’t dreaming of muscular bulges. With a treadmill and few cycles it does my job quite well. The gym was constructed in the garage of the first block by the society management as a quick solution to the state of its rolly-polly, sugar loving residents. Glass walled on three sides held it safe and told the whole world about your little workout. Well, that’s good if you are motivated by stares. I was on my third km on the mill when I realized that some moving was on at a house in that building.

Labor was stacking furniture and other items onto a tempo which was visible to me in the mirror in front of my treadmill. I was enjoying my run and by that time was perfectly warmed up and bathed with sweat, wiping parts of my face every now and then. The labor started turning and looking at me, standing for a couple seconds and staring at times. They probably thought that I couldn’t see them as I had my back towards them. After a while, two of them, seeming lousier than others, perched their wretched bottoms on the back railing of the tempo, in a bid to get a periscopic view of a girl working out in a gym.

Except, what they did not know was that I could see every move they made. I did what girls do in most South Asian countries. I ignored. I thought they would get on with their work after a few minutes. I was wrong. They just sat there, their constant scrutiny starting to annoy me. I traced their line of sight to my behind. I was in the consciousness of their drunken gaze, made cheaper by the slight head tilt. Eyes half closed, the other half burning my insides. I could feel my jaws tightening and my steps becoming louder, while they graduated their cheapness scale to pointing at where their eyes were focused and passing, in what I may best contemplate, downright lewd remarks. Almost in the affirmative for my assumption, one of them broke into a slow and sly grin after hearing what the other had to say, with eyes not shifting focus for even a tiny bit.

I was imagining the worst and that really made me angry. After finishing my 4kms, I stomped out of the god forsaken gym and stepped into the garage, near to where the tempo was parked. Seeing the gym door open, they turned to the other side, almost as if it was a much-practiced reflex. A reflex of men who weren’t real men, but were lowly, degenerate and sick beings born to destroy all morality from the face of Mother Earth. Investing enough terror and contempt in my naturally loud voice box, I bellowed for them to move away. To cut their sleazy jig and move away that very moment.

One of them tried giving me a look, which was suitably answered by a hand raised to come down in a slap. He ran away before I could bring my hand down. Good for him. Or good for me? The guilt content was so high that they could not come up with even a word in their defense. They were so aware of the immorality of their behavior that all they did was run away.

Thus, need is for women to stop ignoring. Need is for the fairer sex to keep itself fairer and not let pollutants cast an evil eye on its fairness. Need is for the women to assert themselves and slap when it is needed, daring to put up an equal fight. Knowing that these everyday fights can be won. Announcing control and not submission. Knowing that no one can stare endlessly at your behind without you permitting it. Believing that no one can stick to you intentionally in a public mode of transport without you sanctioning it. Telling yourself that no son of a human can take away your rights of equal or even better, fairer existence in this world of men and women. Waiting for the government to initiate a change is so old school. No one will do anything. They were all time tested and came out with miserable colors. There is no arm to cling to. You have to go right ahead and box every devil who dares. They say it takes a long time for the embarrassed to rise again. I hope that’s true for the desperate too.