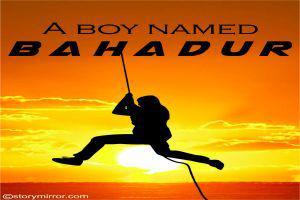 Last night rain washed away all the dirt from the leaves, the garden looked lush and green now. Ram Bahadur was looking outside the window of his mansion in UK. Pleased to see the change in the weather, Ram was looking forward to the day. His grandson Aarav Bahadur now in class five was going to participate in the state-level running competition. This was a big day for everyone in the family since Aarav was preparing for this race for last six months.

There was an air of apprehension too, that was visible on the faces of everyone in the family. Aarav’s parents Shyam and Rita had taken a day off from work. They wanted to be around and cheer their son and see him win or at least complete the race as a true athlete.

Each one was keeping a smile and strong face in front of Aarav. They wanted him to feel positive and enthusiased for the big run. Somewhere they wanted to keep those ugly memories of last month behind them. They just wanted him to concentrate on the race.

Ram somehow could not erase that horrible incident out of his mind.  Memory of that ill fated day when his grandson met with an accident kept coming back and forth. His injuries and condition were serious and doctors had lost hope that he would survive the ordeal. Aarav, the heart and soul of Bahadur family was almost on the verge of dying.  The entire neighbourhood was praying along with the family. All of them ended up cursing that drunkard who with his rash driving injured Aarav.  The car almost crashed him as per the eye witness.

Trying to shove off those memories away Ram was pleased his grandson like a true bahadur battled the odds and emerged as a winner. He was happy that he suffered in his youth and that those days of struggle and success uplifted his grandson’s morale and spirit.

Ram who now lives an affluent life with all luxuries at his disposal had once lived a tough life. Having lost his parents in a massive earthquake back home at the age of five, Ram became an orphan overnight. His world shattered with no direction, hope and most importantly a family to go back to. Having spent first few nights under the sky, withstanding harsh weather conditions and meagre food to eat; Ram felt like a fish that was forced to live out of the water.

Life had come to a sudden halt; he saw death, devastation and helplessness all around. Children around him crying, mothers looking for their lost family and kids, homes reduced to rubble and people running helter-skelter. Those days were as good as living in hell. It was the ‘no hope’ zone that he lived in.

But even in that murky situation Ram would remember his promise he made to his parents. While on a family dinner, he ensconced in his mother’s lap had told her sweetly ‘Maa I am a brave kid and nothing in this world will shake me’. He said to his mother to console her who was worried since Ram had just fallen off from one stair at the temple. Though, not seriously injured Ram’s mother was inconsolable.

These lines were said out of innocence but it stayed with Ram in his mind. While sitting at the relief camp with other that were affected from the natural disaster, Ram felt a sudden rush of energy and positive wave. He wiped his tears, dusted off the sand from his cloths and walked up to the army personal who was helping in relief work.

With his innocent voice which was determined and confident Ram asked if he could help the army and other members carrying out humanitarian work? The army officer was shocked but gave the boy a chance, Ram was asked to look after the kid who came to the camp and make them happy. Like an obedient student Ram even at that tender age performed his duties with absolute ease. This brought Ram in the limelight and army took special notice of him.

The Indian army adopted him and brought him to India after the relief work was wrapped up. Ram was given best education and care. Treated like the son of the soil Ram rose to become one of the best army officer. He won many wars and got laurels for his country. Never for once did the memory of earthquake dither his spirit. Ram marched like a warrior who was out there to win the world with his good deeds and work.

So when Ram’s grandson was recuperating on the hospital bed, it was the stories of survival and success of his grandfather that kept on motivating Aarav to fight the odds and emerge as a winner.