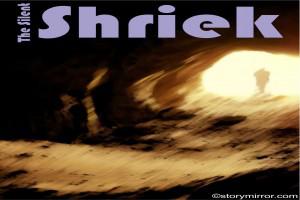 There was a sudden creak of the door. I thought I was dreaming, but then I felt my phone buzzing. Just then, I realized, it wasn’t a dream. I picked up my phone to check the time. There were one hundred and seventeen messages from just two conversations. Just when I was about to check who it was to disturb me so late at night, the door creaked again. I looked up to see nobody. There was nothing but the walls. I stood up, walked up to the washroom door, stood there for some time, wondering what to do next. I don’t remember for how long I stood there, but I’m certain that it was not a short span of time. My head grew heavy, and my sight grew dim, but I somehow managed to switch on the washroom lights, went inside, opened the hot water tap and washed my face. I felt relaxed. It had been a tiresome night. I looked at myself, my swollen eyes. I smiled at the mirror, switched off the lights, shut the door and went to bed. Checking my phone, I noticed something odd. I looked to the wall that stood to my right, saw nothing. Maybe I was just hallucinating. Shut my eyes, I went to sleep. It hadn’t even been a couple of seconds, when I opened my eyes wide again. Looked again to the wall that was to my right, and what I saw, sent chills to my bones. My favorite ‘Pink Floyd’ poster was missing! I was scared to death. Not because I heard that creak again (though I had locked the door earlier), not because my poster was missing, but because that wall was now three quarters of an inch ahead of where it was before. I locked my eyes upon it, and just when I realized what really was happening, my heart refused to beat!

I didn’t know what to do or how to react; I went numb! However much I wanted to move and run out of the room, my muscles refused to work. They were jammed. Somehow I gathered courage and tried to move. It was as if I was paralyzed. But I gave my mind all the reasons to instruct my muscles and bones to start working. And right then, I felt a sudden rush of blood to my face. My face turned red from pale. I rushed to take all my blades, needles and sharp tools, and while reaching for the door, got hit by something very hard. I fell down. Blood oozed out from the middle finger of my left foot, I could not help but cry. I stood up with determination, and very carefully reached for the door.  By now, all the walls were about nine inches ahead of where they were before. I tried to unlock the door, and caught the door handle. The door did not open. I pushed it hard, it did not move. I was locked inside…

The walls were closing in. I could hear them laughing, laughing at me, mocking at me. Apart from the walls, there was just visible darkness and nothing else. And right then, the window caught my eye. I reached out for it. Not surprisingly, it was locked too. But I was not going to give up this easily. I let the walls laugh. My room was now thirty by fifty inches wide. I punched hard in the glass, it broke and I could finally smell fresh air, the beautiful fragrance of the soil outside. I jumped through the window and felt free! I was hit, but I sat down on the road and tried to reach out for my left foot to see how deep the wound was, and right then, I woke up!

I was in my bed, with my friend fast asleep, beside me. I felt my facial muscles relaxing; it was a terrifying dream. I felt so loose and weightless. I wiped my face, which was sweating, walked up to the washroom door and washed my hands, feet and finally, face. I came out of the washroom, took my iPod and earphones and just went out in the balcony. It was somewhere around 03:00 hours in the morning.

It was so beautiful out there, silent, quiet, peaceful, and most important, it was dark! There was something in the air that was hypnotizing me. It was making me lose myself. It seemed as if my soul and my body had departed. I felt so light, like I could float in the air, like I was in paradise…. I was comfortably numb and it felt great. The time had stopped. There were absolutely no thoughts in my head. I could hear the air. It went past me, whispering something really strange, in my ear. I could feel the grass, the wet dew drops that tickled my feet. I was in Heaven… I closed my eyes and tried to move my wrist to reach out for the black rose that was just inches away from me. But I couldn’t move. I woke up, again!

I was in the woods, running, yelling, shrieking at the top of my voice; screaming so loud that my vocal cords hurt. I was not tired; I had enough energy to cover a mile more, sprinting. I started crying, crying hard, harder than ever. I bumped into a broken trunk of a maple tree, and fell down. I didn’t stand up again. I rather hugged the tree and then sat beside it, sobbing, quietly. There were marks on my body; marks of blades, needles and scissors. I was carrying all of these things in my left hand. I spotted some red spots on the ground. I looked up to find nothing. I looked at my foot, it wasn’t bleeding. I looked at my wrist, it was fine too. Just then I caught a glance of my left palm. It was bleeding. There was a deep cut caused by the scissors. I didn’t bother to wash it or cover it; instead I took the very blade that had been there with me all these years, and made quick, outrageous cuts on my wrist. I was trying to let my frustration out. I was yelling. There were tears in my eyes. I kept going on. When I stopped, my whole hand was red. There was absolutely no sign of skin. I started to peel off my skin from my fingers. I ate that skin. I was doing well, and was feeling happy, when I felt a hand over my shoulder. My eyes followed the length of the hand, and then the body, finally reaching the face. It was my favorite friend. At that very moment, I realized that I was missing him. He sat beside me and wiped my tears away. We walked and sang together. It was so much fun. But then he started cleaning my wounds. I didn’t really like it. I didn’t want him to do that. But he shut me up! It was in his eyes, how much he wanted me to give up this habit. I made a false promise to him because I knew that he would never understand how important it was to me to be suffering from physical pain. He was glad. I was glad he was happy. We started walking out of the woods, singing, talking and laughing. It was a beautiful day. It was drizzling too. We were having a really good time together.

With time, I started disliking him, rather hating him. I was getting emotionally attached to him. I did not want that. I have always been a loner and would very much like it that way. Nobody is important to me and will never be. I am too scared of getting close to anybody. I don’t want to be hurt! I did not want him to come any closer to me. I could not let him in. And so, I left. I ran away from him. I could hear his voice; he was calling out my name, looking for me. But I kept running. And I ran far, far away. His voice now grew fainter. Tired, I sat down and surprisingly, fell asleep.

I woke up, again, only this time, in my room, with music and books. I was in my favorite sweatshirt and had a pen in my hand. I looked around to find a notepad in which I had written some six pages. And then it dawned on me that I had fallen asleep while writing. I smiled at myself, looked up at the ceiling, realizing that I was now in the real world!