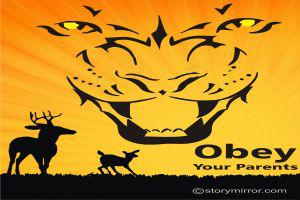 There lived a little fawn with his mother. Once the fawn thought that he always had to go everywhere with his mother. Now he was grown up, He could go alone to places , but his mother did not allow him. The fawn found it very frustrating and decided to sneak off alone, with out informing anyone.

On a hot summer day. When the fawn mother was asleep , the fawn slipped out from there. He went to an open field and began playing hither and thither and found it very thrilling. After some time he felt thirsty.

He went to a nearby stream to drink water. After he had finished drinking water, he saw a lion staring at him  from the upper side of the stream.The lion was licking his lips and planning to eat him. The fawn was aghast to see  lion with red and burning eyes, lolling his tongue with a clear intention to devour him. He began trembling with fear. He did not know what to do.

The lion called him and said, “ You have spoilt the water . you know I am drinking the water that has been made dirty by you.”

The fawn started moving backward slowly and said, “ Sir , how can I spoil the water. The water is flowing from your side towards me.”The lion did not know what new blame to put on him again. Suddenly he heard a deer calling the fawn.

The fawn ran quickly to his mother within a few seconds, they were out of sight.The lion was disappointed. It is correctly said that children  should obey their parents in order to to avoid getting into difficulties.