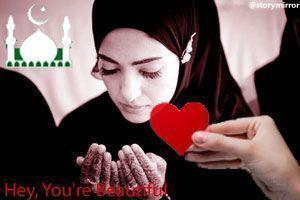 “Hey, you’re beautiful.” I have heard this statement all my life. I was born beautiful. As a kid, I was told that my eyes are gorgeous and my cheeks are soft like cotton. Well, when we are young, we all look the same. Every child is ‘physically’ very cute and charming. The innocence that drips through their faces is what makes them beautiful. And I was another such child. I was told that I am different; I am prettier, cuter than the rest of the kids of my age. Well, but they were my parents, what else can you expect from them? To every parent, their child is the prettiest thing they’d ever see in their lifetime.

Some few years down the line, I transformed into a teenager. A young, lively, and again, stunning teenager. My friends used to say “Nana, your hair! OH MY GOD. How can it be so pretty?” My best friend, Rukhsaar whom I fondly call Ruru was equally beautiful. At least, in my eyes she was. She had the kindest soul, her eyes weren’t hazel like mine, but those dark black eyes twinkled brighter than the sun of another galaxy. She’d smile wider than Amazon. She was pretty. I was happy.

Then came the late teens, and my adolescence was bursting with womanly glow and gait. Rukhsaar was growing into an even prettier girl. She cut her hair and left them hanging at the shoulder. I admired that hairstyle so much. I was envious of it. But what I didn’t know was, what she was envious of…

“Nana, Life is easy for you…” said Ruru. This wasn’t how she always spoke. Her gentle tone sounded cold. Her eyes weren’t twinkling, instead they were telling a different tale. Everything was gone, before I could ever comprehend what was happening. Ruru was….jealous of me. Her hatred had sunk the love which she had for me so deep in her heart, that now, it was difficult for my love to sail back. Slowly as my mind absorbed the reality, I replied plainly with, “Ruru?”

Ruru had already collapsed to her emotions and started crying, “It is easy for you, isn’t it?” I...what could I have said. I was still staring at her. She breathed a bit and spoke “You knew right, I liked him?” I placed my hand on her shoulder “Rukhsa…” and she slammed my hand against the wall.  It pained a bit but my heart was burning with much greater agony and helplessness. She continued, “You took him away…why did he ask you out and not me? Why did he get you a rose and not me? Why is it that everyone tells me you’re beautiful and I am not? Why?”

My world had twisted upside down at that very moment. Ruru meant the world to me, and I made her cry! How could I? But, it wasn’t the end. Ruru isn’t heartless. She was pure goodness. She cried, cried, cried. And suddenly, out of the blue, Ruru hugged me, “Life is hard for you isn’t it?”  I was puzzled and confused.

“I know I am confusing you. One moment I say that life is easy for you and the next moment I say it is hard for you.” She just put words to my thought. “Being beautiful makes people envy you. Unwittingly that green eyed monster of jealousy on you.” I nodded to show to lend my support to her statement.

“Finally I can realize, it isn’t a bed roses for you either.” said Ruru, “The same beauty that makes strangers be kind and generous to you is also the reason why people remain only acquaintances in your life. Though you never intentionally condescend them, but when we see people’s skewed attention towards you, we begin to think that is because of comparison with you, we are losing out. For no reason of you, this sourness just poisons peoples mind.”

"I…Ruru, don’t embarrass me. I am sorry. Of what use is this beauty to me if I have a 1000 admirers but no trusted friends?” my eyes had started shrugging water, “I know a thousand eyes looking at me in rapt attention but few attending to me. My each success is attributed not too my talent and skill but to my beauty. It is as if success is passed on to me like inheritance rather than hard earned.”

“Enough now, we aren’t talking about it any longer. I am sorry, you are sorry, now shut up!” Ruru roared with laughter. That’s how she has always ended arguments. I was smiling brighter than the sun.  I was glad, and the proudest of my pure-hearted true friend. And in the truest sense, Ruru just proved me, that she’s a million times more beautiful than I could ever be. Beauty, really, really resides within.

School was a bliss for me, that is, if we are looking at me from a third person’s perspective. I had all the guys’ attention, would score great marks, I was tall, slender, lovely cheekbones, hot lips. I am not being a bit of ostentatious, it’s called self-awareness. But ask me, problems had just started. Ruru convinced me to date a guy called Tafseer. He was very handsome, an eye-melting body, he was probably my counterpart in the school. I had assumed him to be a gentle guy because, I believed he had gone through the same fate as I had and probably he would understand me the most. Tafseer, he was…very quirky. I adored his antics. He had this crazy ability of making me smile regardless of what my mood was. He was the same guy Ruru was had set her dark eyes upon.

I was one year through with my relationship. Everything was going right, yet something was off. But I couldn’t sense what? It was Tafseer. He was talking to his friend, and it was a rather funny conversation which I was overhearing. He was praising my good looks, my charm, our kisses and the sweet scent of intimacy which we shared every now and then. I was blushing the most alarming shade of pink. And then, “My my, brother! You’ve no idea what a bomb she is. Why else did I get into a relationship with her? For that hot bod. Who wouldn’t want to date a girl with a figure like that?”

I was stunned beyond describable limits. My breath stopped for a moment. And my heart was still, as if winter set in. I smiled, it was one of those smiles which you give when you knew something was gone happen and it happened. Just like there are tears of joy, there are smiles of sadness. It was one of those. I went to Tafseer, and I was still smiling. My heart was at its warm pace again. Tafseer was mumbling explanations, but ‘Why else did I get into a relationship with her?’ kept ringing my ears and I had turned deaf to whatever he was saying. Maybe he wasn’t even mumbling and must be shouting but my ears and brain had given up. My smile kept getting wider and not a single tear was shed. I looked into his eyes as if wanting to look past the yonder. I was hoping, ‘Please Tafseer, make me smile, make me smile’, but maybe our relation was a ship without sail which lost its direction and the only shore which awaited it was despair. I left it and calmly walked away.

I questioned to Ruru again, “What use is this face when all it can do is make people stop at it and not look beyond it. People love me for my face but that’s not what I want! Beauty is transient and will eventually fade away, all that shall remain would be memories my heart felt, unfortunately only bitter memories.”

Ruru wasn’t speechless, but she chose to not speak and let me drain my emotions out. I looked at her and she gestured an ‘it’s okay’ with her eyes.

I got into multiple relationships and all failed because of the same reason. I graduated and started looking for jobs. I cleared my first interview confidently and elated my heart swelled larger than a puffer fish. For the first time, it wasn’t my beauty which got me something but my own hard work and dedication. Well, at least that’s what I thought at first. 3 months later, my boss called me to his room and the rest is what my mouth feels foul to pronounce. Same thing all over again, and like always, I rushed to my true and only support.

"They say at every moment every second that you got everything because you were lucky. You know Ruru, more than any cuss word and all the abuses, what hurts the most is to say that the result of your hard work is the result of fate. It just makes my blood boil. And you know why it hurts, because that hard work is your own. You own in this world except your deeds. To hear that all the pain that you bore was meaningless is can anger any stoic personality." The words just left out of my mouth just relaxing my pent up accumulated over the year.

Beauty came to me like a curse than a boon. My pretty face sure got me a little perks everywhere. And I must confess of the bad person I was, I have knowingly used my beauty to draw benefits at times. But in the long run, it never helped. Rukhsaar got married to well-off man. He wasn’t the eye-grabber like Tafseer but he was jovial, kind, warm and most of all, he loved Ruru immensely. They have never said ‘I love you’ to each other, but expressing something through words isn’t always the only option. Khalid never got Ruru any gifts, he never gave Ruru a shoulder to cry on instead he would push Ruru to stand up again and taught her to not expect anything from this world. He just stood by her all the time and supported her passively. They were the happiest. I was jealous of Ruru’s pure-heart. In the end, my beauty led me to a life of despair, but Ruru’s benevolent heart cured all her pains in this world.

I started my own small Parlour, the only thing I was good at. I never married anyone, but I did adopt a girl. She is the prettiest. And I made sure; she grows more on the inside. She had a fondness for Ruru, and I was glad it was so. I want to give my daughter the same heart which Ruru has. Ruru, I love you.