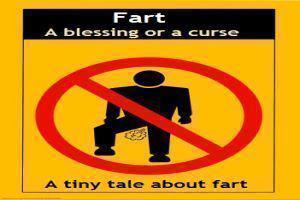 “Farting is a part of life, but when and where to fart is an art of life: Professor J. J. Fart”

Let’s start with a little introduction of Fart. A Fart is an emitting wind from the anus. It is the second word that starts with “F” and is considered vulgar and offensive. Though, I do not know what is offensive in it. A typical fart is composed of about 59% nitrogen, 21% hydrogen, 9% carbon dioxide, 7% methane and 4% oxygen. Only about one percent of a fart contains hydrogen sulfide gas and mercaptans, which contain sulfur, and sulfur is the reason what makes a fart stink.

According to Fartology (a science that deals with farts and all the shit happen because of it), there are two kinds of people in the world; one who farts and ones who do not. However, latter one is a rare breed. Farting people can be further divided into: public farter and private farter. Let’s not discuss the private farter. They do it in private and we must appreciate their privacy. Let’s discuss about the public farter. These people are shameless people. They do not care whether someone around them is old or young, man or woman, whether someone is suffering from Asthma or any respiratory diseases, whether they are in a crowded bus or in a train. They just believe in passing. I feel pity on the people around them.

One of the biggest challenges this world is facing is air pollution and the contribution of these farting people cannot be denied in that. We need to write to the government and ask to propose a bill so that few rooms can be made at every nook and corner for these people so that they can fart till their stomach is at peace and rest of the people can live in natural air. These rooms should have a facility to provide ‘fart masks’ to every arrival so that they do not get themselves killed from other people’s farts.

A fart is the thing which looks fine if it is someone’ own. The problem starts when it is of someone else. In their fart people can live hundred years but in other people’s fart people cannot live even a single farting moment.

“Dual mentality or discrimination,” whatever you call it.

Additionally, there is a need to place the hoardings like “No farting Zone”, “Farting is a punishable offense” and “Fart Away zone” nearby railway stations, bus stations, and crowded markets as farting is more dangerous than smoking. People can bear the fume or smell of smoking but not of farting. I believe warning should be given in the theaters, while screening movies, about farting and its outcomes. Someone should be made ‘Mukesh Kumar PADANE’ who got nose cancer because of smelling too many farts. His case study should be discussed openly.

I believe the deaths of people from smelling farts are greater than smoking or chewing tobacco. It is the thing that farting cases are left unreported. No Police station lodges FIR on farting. No arrest is made and no case is taken into court. There is no law and order in the country regarding farts. It is a shameful situation not having such a system that could protect innocent citizens in crowded buses and trains. I guess, it is because of lack of education or knowledge or awareness.

Therefore, since beginning children should be taught about farting in school and colleges. They need to be taught where to fart and where not to for a better society. Seminar and workshops should also be conducted to teach people ‘what to do when they are on a verge of farting’ and ‘what to do when someone around them does fart’.

There are two kinds of farts; fart with a sound and fart without any sound. The fart with sound is considered as free of smell while the fart without any sound is full of unbearable smell. The reasons of farting can be many like idle sitting, constipation, lack of food or spicy food. It is believed that food plays an important role in deciding the luck of a fart. If spicy food is taken, the fart’s luck is to travel miles and leave its presence everywhere and that too without any sound. If fart is because of having no food, it has little or no luck. It does not affect the life of the people around but alarm them to keep their way separate from the one who farted.

You can easily tell about people by just smelling or listening to their farts. If fart does have a stinky unbearable smell then the person had spicy food or is suffering from constipation. If fart is just a sound, no smell at all then the person is hungry and he had skipped his food.

These ‘sounding fart’ people are the reasons behind ENO and Gelusil’s high sale. The company is having a big business just because of these farting people. So, basically they are giving employment to thousands of the people working on that particular product of the company and we must respect these farting people for that.

Farting is a business opportunity for companies. Companies can launch products dedicated to farts like ‘reduce the smell of farts up to 50%’, ‘wear these farts undergarments and avoid farts’ smell’ ‘fart condoms for nose to avoid unwanted smells’, and ‘turns your farts into chocolate flavors’. I tell you it is a billion dollar industry if tapped and captured properly.

Farts can also be used for defense purpose. Missiles can be made after mixing millions of different stinky farts and they can be used on enemy countries to teach them a lesson or to oppose their policies or intrude. It will teach them that they are just ‘a piece of shit’ like our bombs thrown at them.

It can also be used as a political agenda like corruption. Parties can announce their manifestos and reveal their agendas to make this world free from farts for a large vote bank. Instead of making religious places, they can promise to make ‘fart rooms’ that can be used by all people of different religions that will be helpful in developing ‘unity in diversity’. Additionally, they can promise to open hospital to treat constipation and offer free foods and fart condoms. It is how fart can be used to unite people for a better country.

Fart also has research potential. Scientist can research on ‘how the farts can be used for daily help’ like whether it can be a potential substitute of CNG or any other locomotive fuel. If a fart can push other people far from you within a jiffy then it can surely help in sending the people to other planets if used in large quantity in spacecraft. I hope, one day it will be a reality. If not me, my children will get to see it for sure.

Fart can also help the people in maintaining a distance from unwanted people. If someone is coming too near or behaving like a magnet towards you, a series of farts will work to keep him or her away. It will indirectly compel people to focus on their own goals instead of putting their nose into other’s farts.

Sprays can also be made by the farts, like pepper spray, for the women safety or women protection. Whenever a woman faces any threat, she can simply spray the mix of farts in the air. I can bet it will help in minimizing rape cases. It will be a cheap but feasible solution to prevent rapes and female molestation.

I strongly recommend that a nationwide contest or international competition should be held every farting year and people should be asked to participate and fart. The one having the stinkiest fart should be announced as winner and his farts should be used for defense, for research and for education purpose in the school, colleges and laboratories. It can also be used in anesthesia in hospital as a substitute of chloroform or socks.

When most of the people are free to fart wherever and whenever they want, there are few who cannot even think about it. They are the people who are suffering from loose motion. If they take the risk of farting in this situation, the situation turns shameful to them. They just look for toilet and sometimes bushes to fart. When these people do farts, there are sprinkles of something called ‘shit’ everywhere in the bushes or toilet seats.

If you ask me what kind of fart I like, I will say, ‘the one with sound’. It is because it comes with an alarm, you get to know who the culprit is and you can distance yourself from the one who did this heinous crime. The fart without sound is lethal; you do not get to know who did it as you cannot smell each people’s ass. It does not have any alarm so you have to suffer with the smell.

In 2014 a study was conducted on farts and found that hydrogen sulfide, the gas that makes farts and rotten eggs smell particularly gross, might prevent mitochondrial damage. So, smelling the fart is healthy?

Don’t believe this study. I too do not. May be this study was done (no offense) by someone who loved smelling farts or someone who was compelled to do so.

It is observed that some people are weak at holding the farts, while there are some who are good at it. These are the most caring and loving people. If you come across such people who can hold their farts, get married immediately. They will take care of you the way they do take care of their farts and do not let others suffered. Because of these kinds of people this world is a beautiful place to live.

P.S. Author belongs to that rare breed who do not fart.

Fart: A Blessing Or A Curse