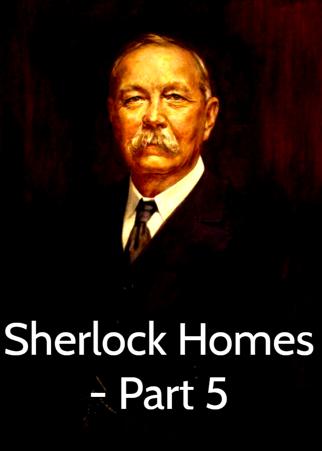 Sherlock Holmes did not like aimless physical exercise, but one spring day I persuaded him to go for a walk with me in the park. We walked for two hours, and it was almost five when we returned to Baker Street.

'I beg your pardon, sir,' said our page-boy, as we entered, 'there was a man waiting for you. He was a very restless gentleman. He walked all around the room saying, "Isn't Mr Holmes going to return?" Finally he left.'

'You see,' Holmes said to me, 'I needed a case, and now I have lost this one because we went for a walk in the park.

Hullo! That's not your pipe on the table. Well, that man must have a very big problem because he left his pipe. It is obvious that he likes this particular pipe very much.'

'How do you know that he likes it very much?' I asked.

'Well,' explained Holmes, 'I think this pipe costs around seven-and sixpence. Now, look it has been mended twice with silver bands that probably cost more than the pipe itself. So, this man must like his pipe very much if he prefers to mend it instead of buying a new one with the same money.'

Just then, as Holmes was talking, we heard someone walking up the stairs, and then a man walked into the room without knocking.

'I beg your pardon,' said the man, 'I should have knocked, but I am very upset, and I need help.'

The man then took off his hat, and sat down on a chair. 'My dear Mr Grant Munro… ' began Holmes.

Our visitor jumped from his chair. 'What!' he cried. 'You know my name?'

'If you want to preserve your incognito,' said Holmes smiling, 'then you should not write your name on the inside of your hat, or else you should turn the inside of your hat away from the person whom you are addressing. 'Anyway, my friend and I have heard many strange secrets in this room, and we have had the fortune to help many people. Please tell us the facts of your case.'

'The facts are these, Mr Holmes,' he said. 'I have been married for three years, and my wife and I were very happy until last Monday. Suddenly a barrier appeared between us, and she has become like a stranger to me. I want to know why. But, Mr Holmes, I am sure that my wife loves me.'

'Please let me have the facts, Mr Munro,' said Holmes, with some impatience.

'Effie, my wife was a young widow, only twenty-five years old, when I met her. Her name then was Mrs Hebron. She went to America when she was very young and lived in the town of Atlanta, where she married a man called Hebron who was a lawyer. They had one child, but there was a yellow fever epidemic there, and both her husband and child died of it. I have seen his death certificate. After this tragedy, she decided to leave America, and come back to England to live with her aunt.

'I should also mention that her husband left her a large amount of money. This money was invested, and she can live very well with the income from it. She met me after six months in England. We fell in love with each other, and we married a few weeks afterwards.

'I am a hop merchant, and I, too, have a good income. We rented a nice house in the country near Norbury. There is an inn and two houses near our house, and a single cottage across the field in front of our house. Until this recent incident my wife and I lived very happily there.

'There is one more thing I should tell you. When we married, my wife put all her money in my name. I did not think this was a good idea, but she insisted. Well, about six weeks ago she came and asked me for some.

"'Jack," she said, "when you took my money you said that if I ever wanted some, I should just ask you."

"One hundred pounds," she said.

"'What for?" I asked, very surprised by the large amount.

'''Oh,'' she said playfully, "you said that you were only my banker, and bankers never ask questions, you know."

'I was not happy about this because this was the first time that there was a secret between us. I gave her the cheque, and forgot about the matter. It may have nothing to do with what happened afterwards, but I thought that I should mention it.

'Anyway, I told you that there is a cottage near our house. Well, I like walking past that cottage, and last Monday, as I walked past the cottage, I saw an empty van going away from the cottage, and furniture in front of the cottage. Someone was finally going to live there.

'Then I went to the door and knocked. A tall woman answered the door. I told her that I was her neighbour, and asked her if she needed any help.

'That night I did not tell my wife about the strange face and the rude woman, but I did tell her that people were now living in the cottage.

'That same night something strange happened. In the middle of the night, when I was not completely asleep, I became aware that my wife was dressed and was leaving the room. She looked very frightened and nervous. I waited for about twenty minutes, and then she returned.

'"Where have you been, Effie?" I asked as she entered. She moved back quickly with fright.

'''Are you awake, Jack?" she cried with a nervous laugh. She told me that she had wanted some fresh air, but I did not believe her. What was my wife hiding from me?

'The next day I had to go to the City, but I was so worried about my wife that I returned early to Norbury at about one o'clock. Walking home I went past the cottage. I stopped for a minute in front of it to look for that strange face. As I stood there, imagine my surprise, Mr Holmes, when the door suddenly opened and my wife walked out!

'Oh, Jack!" she said, "I came here to see if our new neighbours needed anything. Why are you looking at me like that? Are you angry with me?"

"I have not been here before."

''I know you are not telling me the truth. I am going to enter the cottage and discover the truth!"

''Please, don't go in, Jack," she cried. "I promise that I will tell you everything someday, but if you enter now, you will cause great sadness."

Then she held me tightly, and I tried to push her off.

''Trust me, Jack!" she cried. "You will not be sorry. If you come home with me, all will be well. If you force your way into that cottage, our marriage is finished."

"I will trust you," I said, "if you promise never to come here again."

'She was greatly relieved. Then as we started to leave, I looked up and there was that yellow face watching us out of the upper window. What link could there be between that creature and my wife?

'After that everything went well, but one day I returned home early. I discovered that my wife had been to the cottage again, so I went to the cottage. I walked into the house and found no one, but upstairs I found a comfortable room, and on the mantelpiece stood a full-length photograph of my wife. I am sure that our maid had warned them that I was arriving, and they all went away. That is why I didn't find anyone there.

'When I saw my wife again I told her that there could be no peace between us until she told me the truth. That was yesterday, Mr Holmes, and then I decided to come and see you for help.'

After hearing this strange story, Holmes sat silent for a few minutes, thinking. Then he said, 'Are you sure that the yellow face was a man's face?'

'When did your wife ask you for the money?' asked Holmes.

'Have you ever seen a photograph of her first husband?'

'No, there was a great fire in Atlanta after her husband's death, and all her papers were destroyed.'

'And yet she had a death certificate. Have you ever seen it?'

'Yes, she got a duplicate after the fire.'

'Have you ever met anyone who knew your wife in America?'

'Has she ever talked about visiting America again?'

'Has she ever received letters from there?'

'Thank you,' concluded Holmes. 'Now, go back to Norbury, and when you see that those people have returned to the cottage, call us. It will be easy to solve this mystery.'