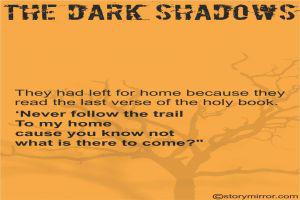 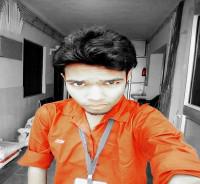 'The sun had just set,

Far behind the hills in west.

The dark shadows followed me up the crest

With the mightiest Aswold sword in my hand

My blow preceded the screech

I swung my hand

And my sword did the rest.'

Prof. Gredsatter was versing with his students with the legend of the holy warrior. Satyaputra- as he was scribed in the holy text, Gresen. He was known for his bravery, his knowledge of art of magic and he was boasted to be the only son of Alura-a dark witch and Fredry-a white magician and swordsman. As he had blood of two pasts of the Fandalf land, he grew up to be the most powerful man it generated. He was well versed in the spells of both arts of magic, his hand was skilled in using sword at lightning speed, and one thing over all-he owned the mystic sword of Aswold.

"So now children, I would like to tell you all that next month our school will be organising an expedition to the great Somakar temple, where Satyaputra was buried. So all who are interested should give their names to the monitor before recess, thank you", after completing his speech Prof. blurted out of the room.

"Hey Martha, are you going?" asked Swer, a boy in late teens, with a toned body.

"Hmm... thinking so. Are you coming," replied Martha, a thin but brave girl.

Soon the two got hold of several others who too were going to the holy Somakar temple.

The date was decided. Consent letter signed. Children had their bags packed. And slowly, but steadily the day of departure came.

"Okay Willio, you lead the boys in the white bus. Take care, no one should be left in the school premises”, said Write Youngman, the proud principal.

Willio, a young lad of 16 obeyed the orders and helped all the guys get in the bus. Similarly Twingle led the girls’ troop. At 5 in evening the buses left for a week's journey. Towards a secret mission. They were unaware of what was waiting for them there, except the principal.

They reached their destination in two days, quite earlier than expected. The teachers offered prayers to Dresaw -the God of tours, for leading them. Suddenly Willio came running with a news that shook them apart.

"Sir Martha and Swer are missing."

"Were they on the bus." asked the principal, a little worried.

"Yes sir, yesterday they were in supper, but we lost their track afterwards...." before he could complete, shadows surrounded them.

A lightning and then a roar, then a voice came from the clouds.

"Death shall fall on the ones, surrounded by the dark shadows.

Cause they know not of the evil spell

Neither have they held the right to come,

Nor they believe Satyaputra never died."

And a man came from nowhere from the shadows.

“I never killed evil, I just tamed them for my future use.” he continued,

"And that is ruling the world of you, dump yards."

And in no time all the enthusiastic men turned into Halimones, a group of cursed people.

From that time a curse lies on the dark shadows.

"Whoever will see the dark shadow of own soul, shall get a place between punished ones- the Halimones.

Swer and Martha reached back safely. They had left for home because they read the last verse of the holy book.

cause you know not

what is there to come?"