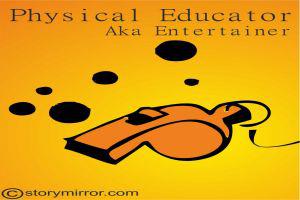 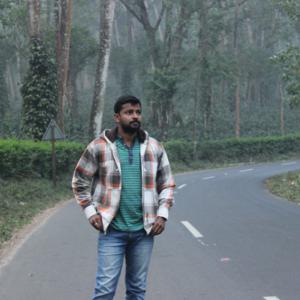 Facing a flighted delivery directed from outside off stump line, Baskar adjusted himself, charged down the track and lofted it straight over the bowler's head. Bang, it was a SIX! Then a good length delivery slightly directed outside off stump, staying deep in the crease at back foot, he cut it sharply towards deep backward-point for a boundary. He then played a stylish leg-glance over deep square-leg fence, facing Yorker-becoming-tossed-up delivery going away from leg stump.

Inching closer to victory, we were just leaping out of delight, which didn't last long. An undersized, fleshy, unattractive person, who happened to be our PT, intimidated us. No! “Physical Educator,” he claims. Yes! The stylish leg-glance from our friend ran on to hit the even more stylish ‘Physical Educator’ who was pretending to coach the students on the main cricket ground.

“Cricket ground? Then where were you playing?” you might ask. Actually, we were playing just outside the ground, near the practice-nets, tennis ball gully-cricket match, mate. You might have been carried away by my eye-catching commentary lines, I understand!

As long as the ball didn't enter the main ground, our so-called Physical Educator didn’t mind, hence we continued. As the game proceeded, we couldn't keep up with the promise.

Infuriated PT, wasting no time, started walking towards us, holding the ball in his hand. Pointing his hand towards us from a distance, he also ordered us not to move. I was there in the athletics team so I knew how to handle this guy. Sensing his fierceness, I went straight to him and apologized. But our PT was a witty guy with sharp eyes, I tell you; he knew exactly who hit the ball. Pointing his index finger, he called Baskar. I turned around and was astonished at the drastic changeover that happened over the place where we played cricket.

Baskar, the man behind this scene, along with wicket-keeper and other players were in very deep discussion. I heard something - sodium chloride when mixed with ammonium hydroxide gives sodium hydroxide and ammonium chloride. WHAT!? One of the short-cover fielders was busy reading the headlines from the newspaper, picked from the ground. Another guy was just ducking behind the goal post. I wondered how it was going to save him. Rest had disappeared already.

“Hey, you come here,” called the PT, pointing towards Baskar, who seemed very busy discussing about the preparation of ammonium chloride and other chemicals along with the fellow scientists. Not only did he respond to the PT, but also attempted to flee from the spot as that whole group was moving while discussing.

“I am calling calling, you are going going,” the PT barked staring at him. Talking about our PT’s English speaking ability, he was the one who taught us how to pronounce ‘tsunami’ (T-sunami).

Standing next to the PT, controlling my soon-to-explode laughter, I saw Baskar approaching him, with a giggle on his face.

“What is your name?” asked the PT

“Sorry, sir,” replied Baskar, who was unable to control his laughter.

“I asked what your name is.”

And it went on and on. He never answered any of his questions correctly.

We burst into laughter, listening to the conversation; even the PT joined in, later on. He patted his back and left.

This is the one of the most amusing-yet-unforgettable college days, which brings in an uncontrollable laughter even now.