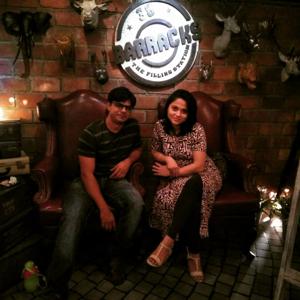 Khan Market, named after Khan Abdul Jabbar Khan, brother of Khan Abdul Ghaffar Khan, adjoining the Luteyns area of New Delhi was bustling with activity on a cool autumn evening. Expats, the rich and young couples thronged the eateries and pubs at the market place. The market was well lit and the service lanes were illuminated with neon light hoardings, however the parking lot was comparatively dark.

Sadhu and Jai Ram were smoking a reefer sitting on the wall adjoining the parking lot. Sadhu passed the joint to Jai and said, “Brother, we have been on the run for over six months now, the wad of cash we brought along is fast dwindling. We need to get back to business.”

“Brother your patience is not going to feed us for long,” Sadhu retorted irritably.

Sadhu and Jai Ram belonged to a gang of kidnappers from Meerut, Uttar Pradesh. Around six months back their gang had been busted and the three other members of the gang had lost their lives in an encounter operation conducted by the Crime Branch of Uttar Pradesh Police. Sadhu and Jai had managed to escape just before the encounter. Since all other gang members had been killed, the police did not have any leads on the two. However, after the encounter they were too scared to live in Meerut and had moved to Delhi.

They were now running out of the cash reserves which they had saved and with no other source of income were planning to kidnap some rich kid for ransom. Since they were new in Delhi they did not have any leads, so they had decided to hang around plush market places in search of their new victim.

As they were about to call it a night and return to their rented accommodation, they saw a family of four walk out of a restaurant and head towards the parking lot. The man was definitely drunk, the wife carried a toddler and a young boy, aged about eleven-twelve years, followed his parents. Both Sadhu and Jai had noticed them at the same time, the father and mother seemed oblivious to the child behind them. The kidnappers could not believe their luck. Without wasting a moment they started following the family. Upon reaching their car, the wife got into the passenger seat with the toddler, the husband instead of getting into the car walked towards the cigarette shop at the corner.

The young boy was trying to open the rear door when Sadhu and Jai saw their opportunity; they sneaked behind the car, grabbed the child, muffled his mouth to prevent any screams for help and made a run for it without turning back. They ran straight to the other side of the market where they had parked their rented car.

Jai got into the driver’s seat, Sadhu pushed the boy on the rear seat and tied his hands behind his back. He was somewhat surprised that the boy was quite calm and did not offer any resistance. Just then Jai blurted, “Brother, we did not think this through, we do not know anything about the family, ask the boy if he has his father’s number or knows the address. If he doesn’t we will have to get rid of him quickly.”

Before Sadhu could speak the boy said in a calm voice, “My father’s name is Viraj Sinha, we live in Niti Bagh and his cell phone number is 98******99”. Both Sadhu and Jai were taken aback by the candour of the boy, but sighed in relief that they had a number to make the ransom call. Sadhu said, “We should make the call immediately, the parents must have noticed the boy missing by now and maybe on their way to inform the police.” Jai replied, “But we cannot use our cell phones, the cops will trace the number immediately. Let them inform the cops, till the time they cannot trace us, we are safe. We will have to steal somebody’s cell phone tomorrow, make the call and dump the phone quickly.”

As they were driving towards their rented accommodation, to their surprise the boy said, “You guys are not safe at all. You will pay for this.” Both Jai and Sadhu looked at the boy in amazement and simultaneously burst into laughter.  “It’s your father who is going to pay kid, not us,” said Sadhu menacingly.

“You have kidnapped your death,” said the boy. “Gag him,” blurted an irritated Jai. Sadhu immediately tied a piece of cloth around the boy’s mouth. The boy neither flinched nor resisted.

When they reached their rented flat in Begumpur village near Malviya Nagar, Jai parked the car close to the rundown building, Sadhu made sure no one was watching them, got off the car carrying the boy and ran up the stairs to their flat on the first floor. They locked the boy in one of the rooms and went out to have dinner. They went to a dhaba nearby, had their food and while making payment at the counter managed to steal the cell phone of the manager which was kept on the counter. As soon as they got out, Sadhu took out the phone from his pocket and switched it off.

Armed with the stolen cell phone they returned to their dingy accommodation. As Jai latched the door, he asked Sadhu to remove the gag from the boy’s mouth and ask for the father’s number again. Sadhu went to the other room and returned within a minute. He handed Jai a piece of paper and said, “Here, got the number.” Jai replied, “We should call the father now and get rid of this phone quickly.” Sadhu nodded and dialled the number. After a couple of rings there was an answer, “Viraj Sinha here.”

Sadhu put the phone on speaker mode and said, “We have your kid, we know you must have informed the cops by now. If you want to see your kid alive again do not inform the cops about this call. We will inform you later when and where to bring the ransom.”

“What are you talking about mister, our child is at home with us, you got the wrong number,” said Viraj Sinha. Sadhu shot back, “Your elder son Viraj Sinha, where is he? Haven’t you missed him already?”

“What??? Whoever you are, this is a sick joke. Our elder son was kidnapped three years ago and murdered!!!

Before Sadhu or Jai could react, they heard a throaty giggle emanating from the other room followed by a shrill voice “I told you. You have kidnapped your death.”